It’s been a hell of a couple of years for the Hamilton Wood Type & Printing Museum, which is still dealing with the enormous costs incurred by its recent eviction and relocation. Fortunately, these overwhelming circumstances have been eased a bit by an unprecedented outpouring of financial help and goodwill from the design community. Neenah Paper has been at the forefront of this support with its “Beauty of Letterpress” project.

In January, Robynne Raye, co-founder of Seattle’s Modern Dog Design Co., created the project’s seventh limited edition letterpress print: “I Love You, Man,” which depicts a pink dog (or is it a cat?) doodle atop “The Beauty of Letterpress” legend printed in Hobo. (“I think I’ve always had a deep down desire to take a typeface disliked by so many, and see it letter pressed,” she says on the Neenah site.) The 5.5-by-8.5-inch piece was printed by Mandate Press.

As with the previous six “issues”, proceeds from the sale of this $5 letterpress print will go toward helping the museum.

Why the museum had to leave

Oddly, we have never come across any reports explaining why the museum had to leave the building that, in one form or another, it has inhabited since 1880.

“The last owner of the factory was Thermo Fisher Scientific,” museum director Jim Moran tells PaperSpecs. “Since the mid-nineties, they were sending more and more of the work they did to other, cheaper locations. This meant the factory use had a smaller and smaller footprint. During that time the building was allowed to deteriorate to a greater and greater degree.

“In late October of 2012, I was told that the remaining work was being moved to other plants and, in fact, Thermo was selling off the entire operation, meaning the Two Rivers [Wis.] office wasn’t even necessary. The sale was to be completed in late winter and I was asked to be out by April 1. I managed an extra month out of them. As frustrating as that was, I’d rather dwell on the fact that they gave us the space rent free for 13 years.”

It’s been a hell of a couple of years for issue 7 creator Robynne Raye, too. In October 2011, she and Modern Dog Design Co. co-founder Michael Strassburger sued the Target Corp., The Walt Disney Co. and various subsidiaries for allegedly appropriating artwork from their Modern Dog: 20 Years of Poster Art book to use on a number of T-shirts. To come up with the funds necessary to take on the corporate behemoths, the designers in 2012 sold their beloved studio.

And so we come full circle: one alleged victim of corporate greed helping out a victim of these troubled economic times, as everything goes to the dogs (or is that cats?). 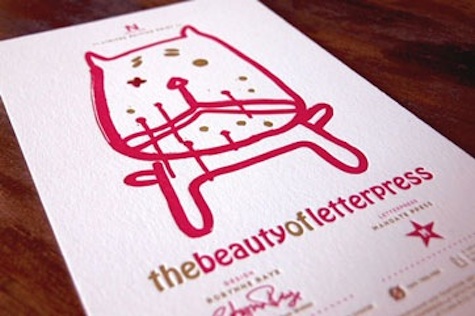