Survey: 60% of us are Font Pirates

This week, font-management company Extensis released an eye-opening report revealing that nearly 60% of designers have “traded fonts with others” in clear violation of font licensing agreements. While the paper is full of interesting statistics, it is what isn’t said that may be most important of all.

First though, the findings:

Graphics.com’s piece on the Extensis report points out:

“After all, [designers would] be the first to howl if someone reproduced their work without payment…”

Howl? Quite possibly. Howl but not sue. That’s because most designers realize that part of the risk of playing in the online sandbox is that occasionally your work is repurposed by clients, your employer, or just somebody who digs what you do. Take away the Internet and yes, the risk of this would go down substantially, but so too would the number of jobs that come your way. 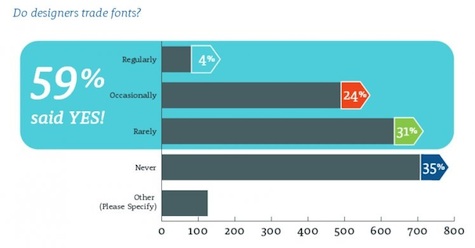 The question is really this: What can be done to make people more likely to comply with font licensing agreements?

The problem with ‘intellectual property’

The first is one of enforcement. Large corporations have little problem with this in the design world because they can afford to build in sophisticated protections. Adobe has always been at the forefront of this, ultimately scoring the holy grail of IP protection when it forced its users to take out a subscription to its Creative Cloud service this year.

Font companies, on the other hand, are usually sole proprietorships or very small companies, so they have to rely on simple protections and the hope that they will sell enough in volume to stay in business.

The second problem with intellectual property is that it’s a concept hardly calculated to gain you any sympathy. Few designers – heck, few workers of any stripe – know what it’s like to complete a project and then be paid for it over and over again in perpetuity.

To persuade people to go along with this, the onus is on the company to create a payment structure and buying process that the average person would deem fair. Who’s going to argue with paying $10 a font? But if you’re paying $60-$80 per font, you start feeling a sense of ownership  that’s difficult to shake. I bought it, Jane needs it for her project, I’m lending it to her. (Incidentally, check out this list of the most expensive fonts from last year.)

So how do we fix the system?

Of course we’ve all been here before. It was this issue that nearly undid the music industry around the turn of this century, with the RIAA music association reduced to suing teens and single mothers for millions. It wasn’t until Apple’s iTunes service made the cost ($1 a song) reasonable and the purchasing process simple that the industry found its footing again.

While some designers will continue to trade and “borrow” fonts regardless (most purely out of a love for fonts in general, surely), there are a few safeguards that could go a long way toward curbing the problem of font “piracy”.

1. Don’t call it piracy. Calling people names never helps, particularly since few actually contravene font licenses to enrich themselves. The word “piracy” single-handedly made the film industry a laughing stock thanks to its increasingly ridiculous equating of illegal downloads with purse snatching and car theft at the beginning of every DVD.

2. Make font licenses uniform. No one should have to scroll through pages of text to use a font, and practically no one does. Buy this font, use it for anything. Done.

3. Make fonts affordable. $10 per font, or $20 tops. Most are only used for one or two projects anyway. Make it affordable and you will make it up in volume.

4. Only sell fonts through licensed font-management systems. Granted this one will require some serious figuring out, but will be worth it in the end. For all of the problems with Apples App store and iTunes, as a delivery system for IP content they are pretty close to perfect. This FMS-only setup not only allows for easy rights management of fonts (something Extensis has mastered), but it also makes it easier for designers to use the fonts they’ve purchased on whatever computer they happen to be on; something essential in this age of cloud computing.

Whatever the law says, it is the law of human nature that prevails. If you want to protect the rights of font makers, font makers must do a better job of disseminating their product, and leave talk of piracy to hoary tales of the sea.