Down in Front! An Effective Campaign

Ah, the 1893 World’s Fair in Chicago. That’s the event that brought us the first major exhibition of AC electricity, the original Ferris Wheel, and America’s first serial killer, who kindly escorted fair-goers back to his hotel for some quaint little murders. Chicago’s Field Museum of Natural History brings all of these wonders back (except, presumably, the murderer) in its current exhibit: “Wonders of the 1893 World’s Fair.” And it does so with a simple but effective advertising campaign. 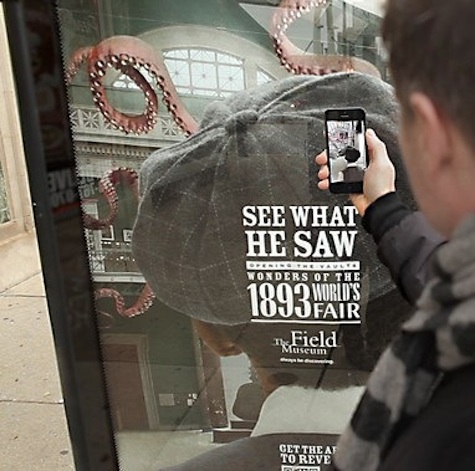 The brainstorm? Posters all over the city depicting some of the great marvels of the fair…blocked by the heads of 19th century ladies and gentlemen taking in the sites for themselves. Printed over the backs of their heads: “See What He (or She) Saw.”

Download the mobile app, aim it at a poster, and you can instantly see the exhibit being blocked by ol’ fat head, as well as get a 360-degree view of the fair’s Kansas pavilion and Midway, along with text and videos about it all.

Now that’s using your head! All that’s left to say is “Down in front!!”