The Drawings Behind ‘Argo’

The Oscar-nominated Ben Affleck movie, “Argo,” is based on a real incident in which the CIA tried to smuggle six diplomats out of Iran under the guise of making a movie based on  Roger Zelazny’s sci-fi novel, “Lord of Light.” 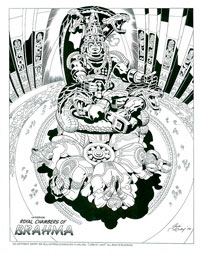 The “verb” in this case is that set designs for this movie project [you really need to see “Argo” to sort fact from fiction here] were drafted by arguably the most revered artist in American comic book history: Jack Kirby. After filming, the director planned to turn the sets into the basis for a theme park in Colorado called “Science Fiction Land.”