How do you Design the Unthinkable?

Looking for a real design challenge? Create a cover for a mainstream novel about an amoral academic who takes his 12-year-old unwilling lover on a cross-country tour of 1950s America. Oh, and the novel’s respected by many as one of the best-written works of fiction in the last century. And…begin.

This nearly-60-year dilemma is expertly explored in the new book “Lolita: The Story of a Cover Girl,” in essays and design by artists, book designers and scholars of the work. While there is much to appreciate in this new volume, modern artists’ attempts to create their own covers for “Lolita” are the most fascinating contribution. The results are reminiscent of those experiments where authors write a novel without using the letter “e.”

A rosebud cradled in an adult’s hand, a man’s shoe pulling itself free from a wad of pink gum on the ground…and an image that is hauntingly, disturbingly perfect. 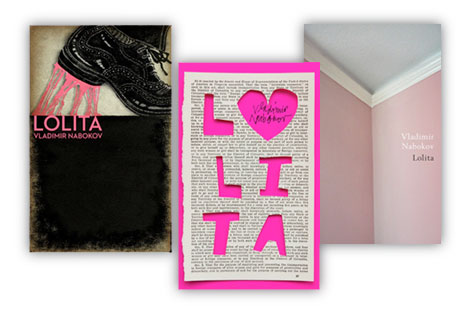 At first, Jamie Keenan’s cover (above right) looks like the upper corner of a room where two pink walls meet the white ceiling. Yet almost instantly you realize this could also be Lolita herself from a certain angle.

This is one of those design books that will stay with you, a testament to the power of creativity to render on paper that which nobody can bring themselves to discuss aloud.