Though Iggesund is staying politely mum about who it favors in the World Cup shoot out currently taking place in Brazil, you’ll excuse them if they crow a little about the part they played in the creation of packaging for the World Cup’s official champagne: Taittinger. The carton used for the limited edition Brut Réserve NV is Iggesund’s Incada 235 g/m2 paperboard, and features beautiful gold and green holographic footballs (soccer balls to us stubborn Americans) along its sides – conversion by Le Sanglier (which specializes in champagne gift cartons), foil lamination by API.

The design is based in large part on packaging that won the 2012 Carton of the Year award at the Europewide ProCarton/ECMA packaging awards. That version was decorated with round holographic champagne bubbles. Both are beautiful examples of what can be done with smart and thoughtful paper design.

Drink responsibly kids, or they’ll be yelling “gaol” instead of “goal.” 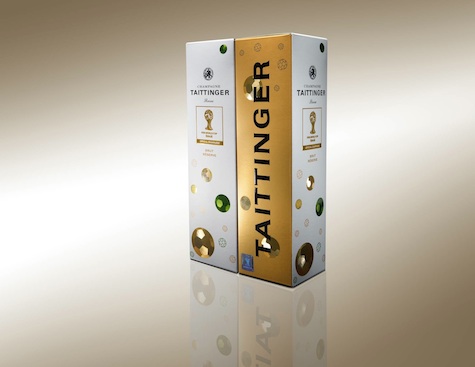