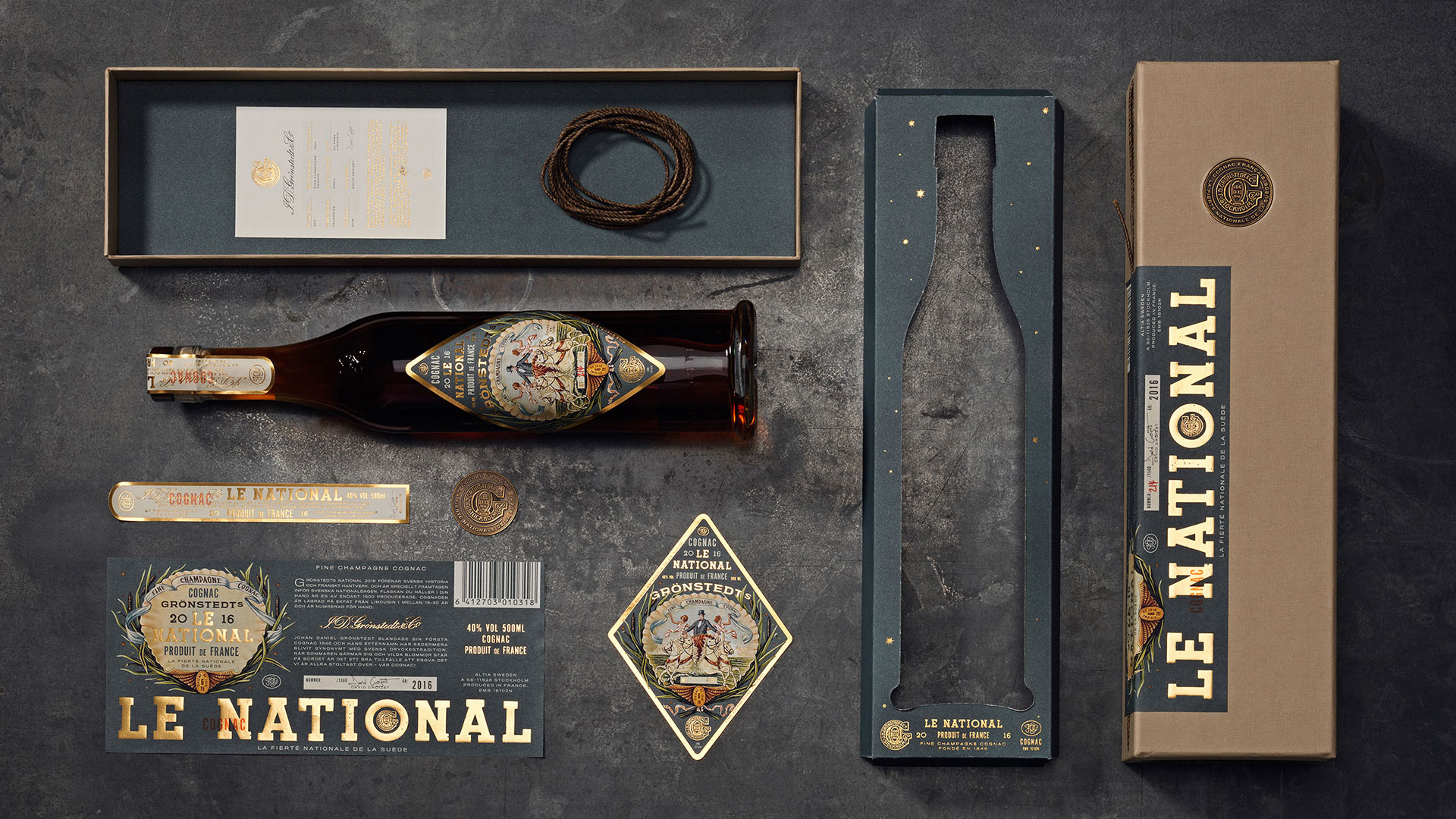 The analog production process of Le National was riddled with challenges and limited resources. From understanding what papers can be used for [small digital press runs] to the logistics of constructing and labeling the product, there was no easy way around this process.

Seems like back when we were growing up, the spirit bottles on our parents’ and grandparents’ shelves boasted labels that had an almost painterly quality to them, as if you could slap them in frames and hang them up on an art museum wall. The label for Grönstedts’ Le National cognac has that look in spades to be sure, but when taken together with its elaborate packaging – hoo boy, we’ve reached a whole new level here.

That’s because Stockholm studio NINE, not happy merely to engage your senses of sight and taste, have added touch and smell to this cognac “unboxing” experience. That elusive final sense, hearing, is no doubt catered to by the “oohs” and “ahhs” that will accompany the opening of the bespoke box in which the bottle rests. The whole package is sealed with tarred hemp string that lends a smoky aroma to its opening. 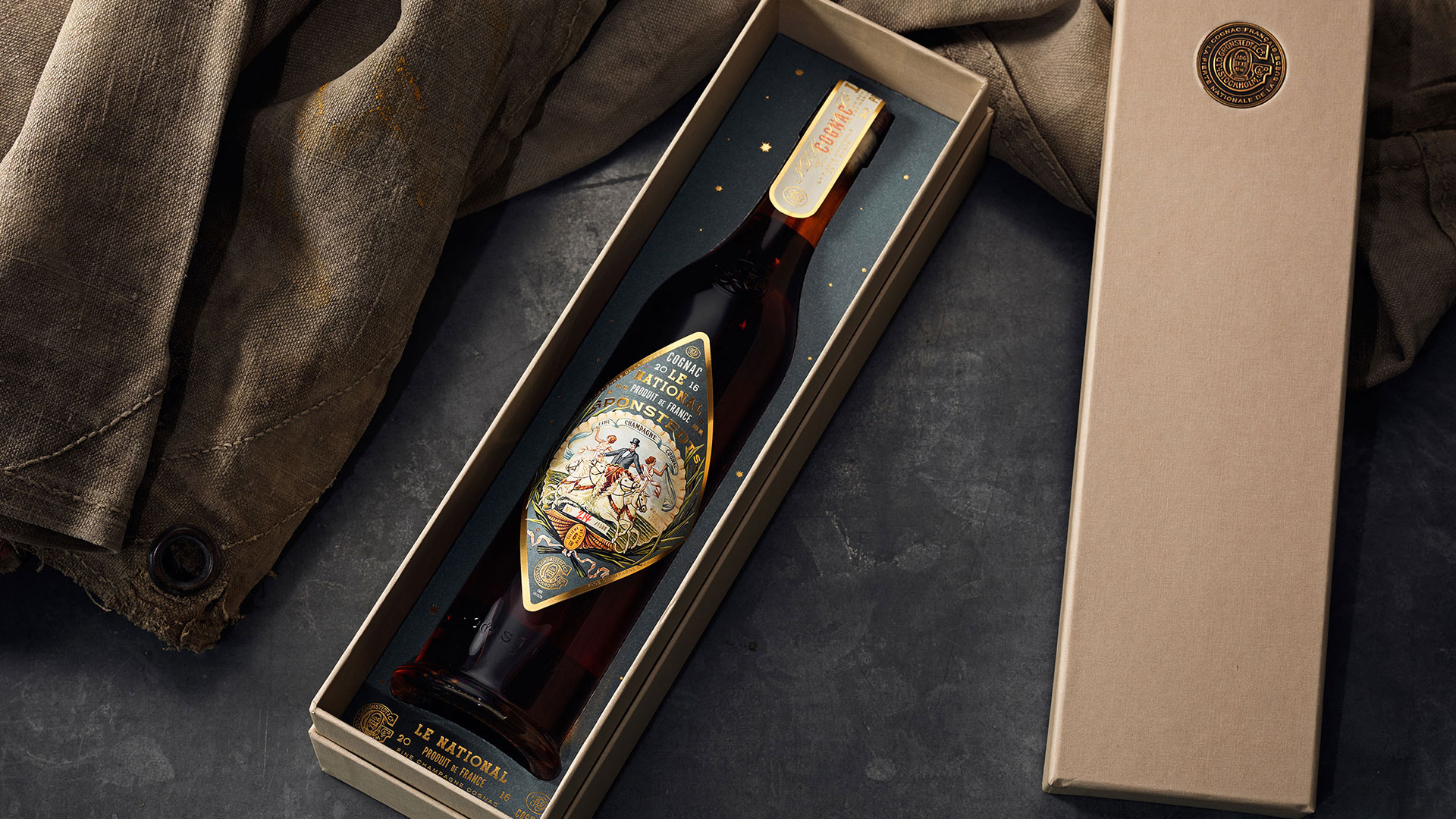 “It was vital that the inner box design met the anticipation of the consumer and their desire to open the box by ripping the outer label with the string,” explains NINE Designer Lachlan Bullock. “Once opened the bottle, together with inner box information, give a sense of surreal wonder and intrigue through image and poetry. The design is intended to enhance the consumer’s imagination.”

If your imagination is not so easily enhanced, there are a few more details that just might do the trick. Take that gorgeous (hand applied) gold-foil stamped label that seals the box – it alone could’ve made a very fetching wine label. Speaking of which…

“Le National is a nod to iconic artist Leonetto Cappiello,” says Lachlan, “who redefined the advertising poster in the early 20th century. Cappiello captures the emotion of the epicurean in their grandeur and grace – the core essence of what is driving Grönstedts to produce their cognac.”

But do let’s cut to the chase, shall we? The detail that we’ve deliberately saved till last is also the one that we’ll be talking about long after the bottle’s been emptied and our guests gone home: that fetching coin embedded in the box lid. Lachlan, helpful as always, fills us in:

“Being a Swedish company, it was important that all of Grönstedts’ production of Le National stayed within Sweden. As a result Svenska Medalj, producers of the Nobel Prize medal, collaborated with NINE to produce the rustic brass medal featured on the front of the secondary packaging, making it very hard to part with!”

Indeed. Perhaps if the Nobel Foundation had sent a package of Le National around Bob Dylan’s place rather than simply calling with news of his Nobel Prize win, they might’ve heard back from the lad. 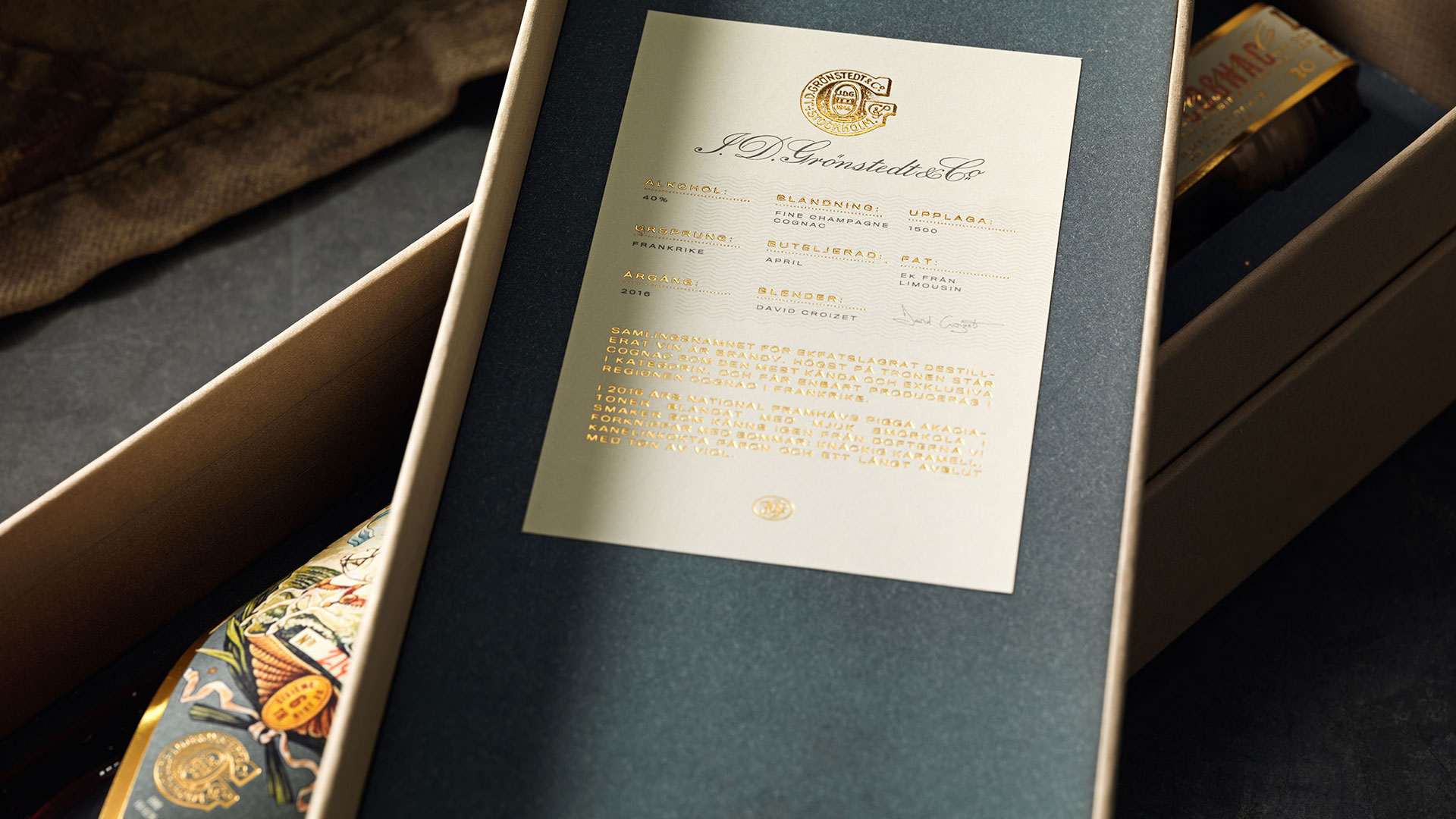 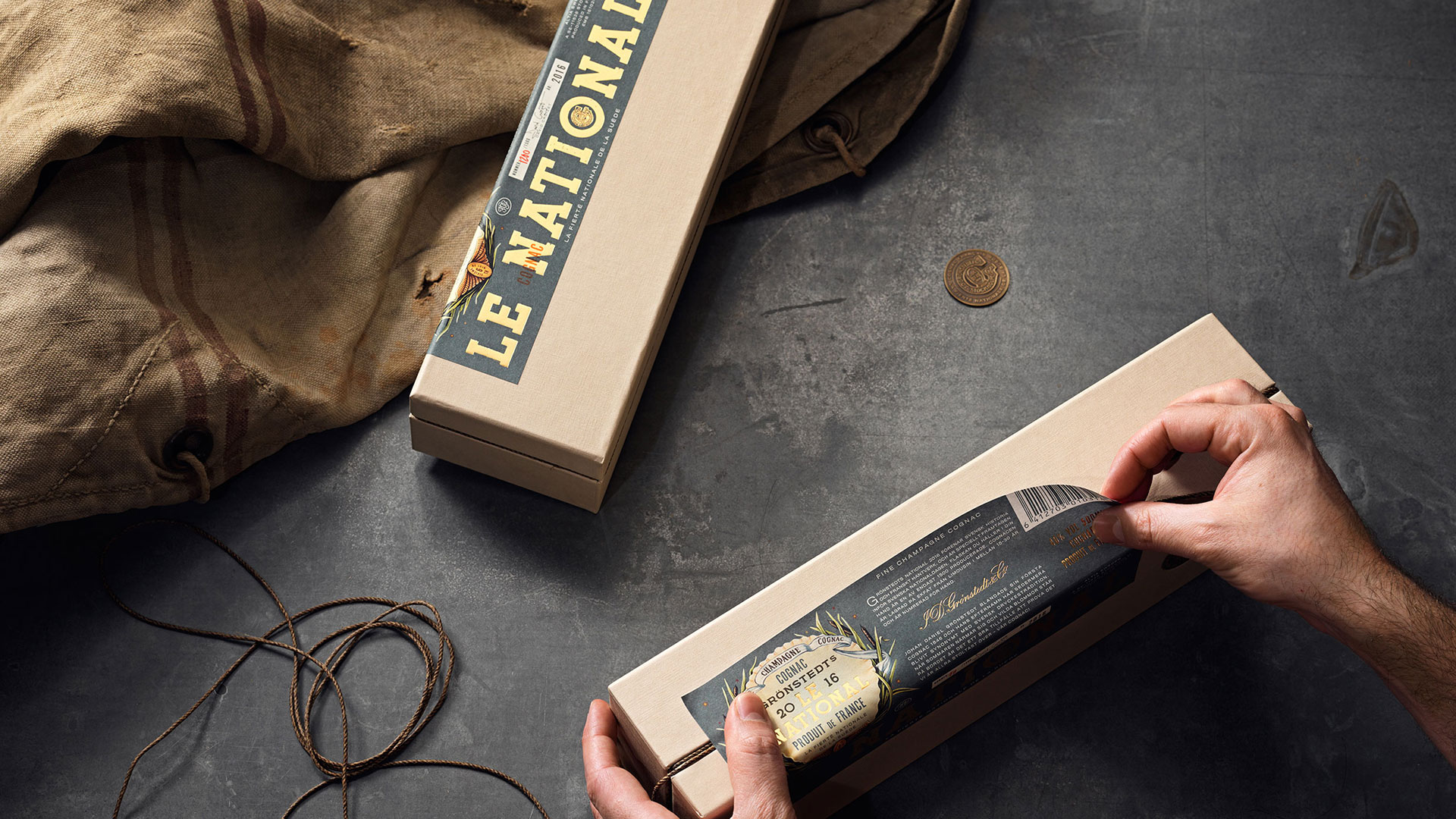 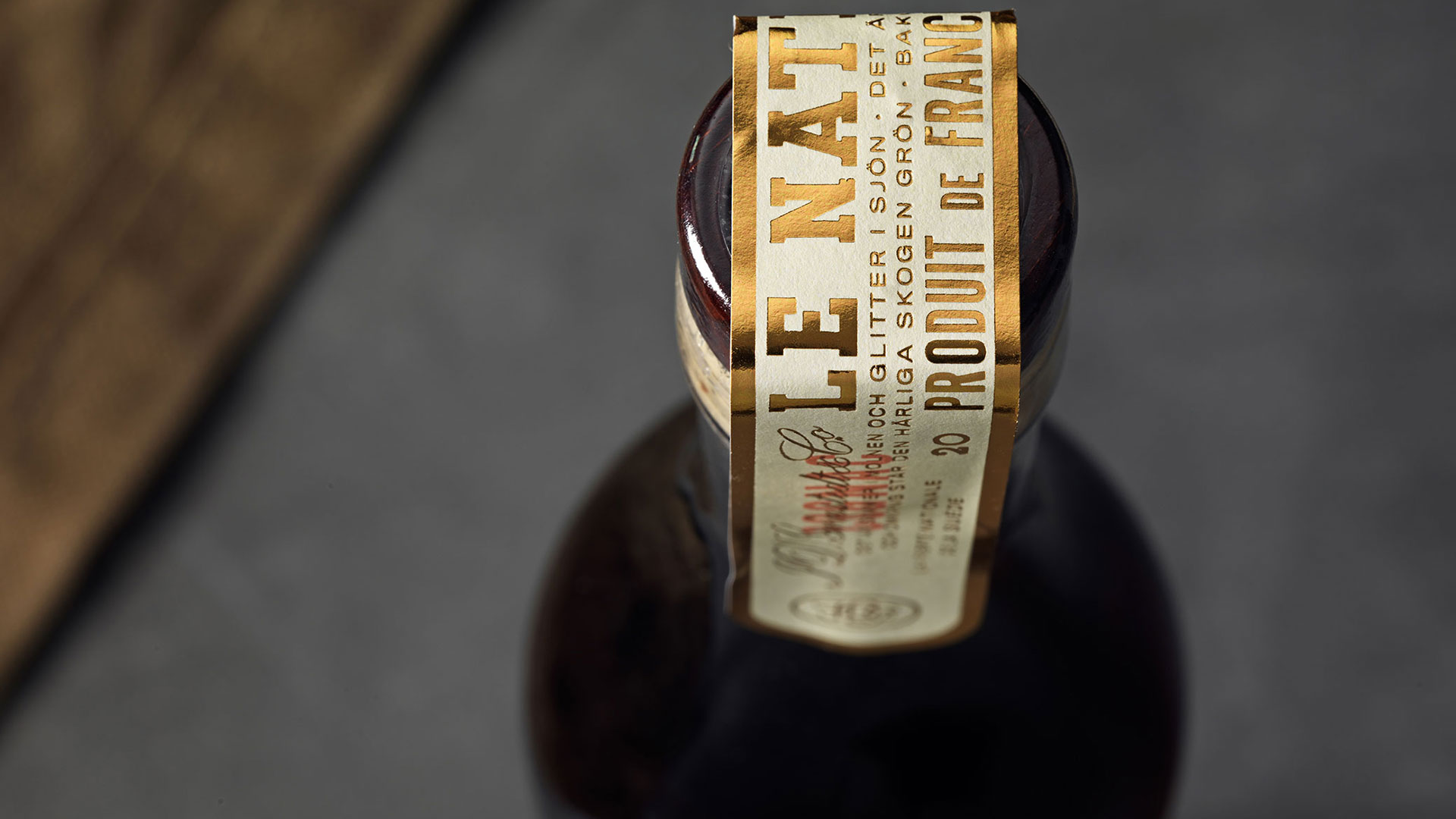 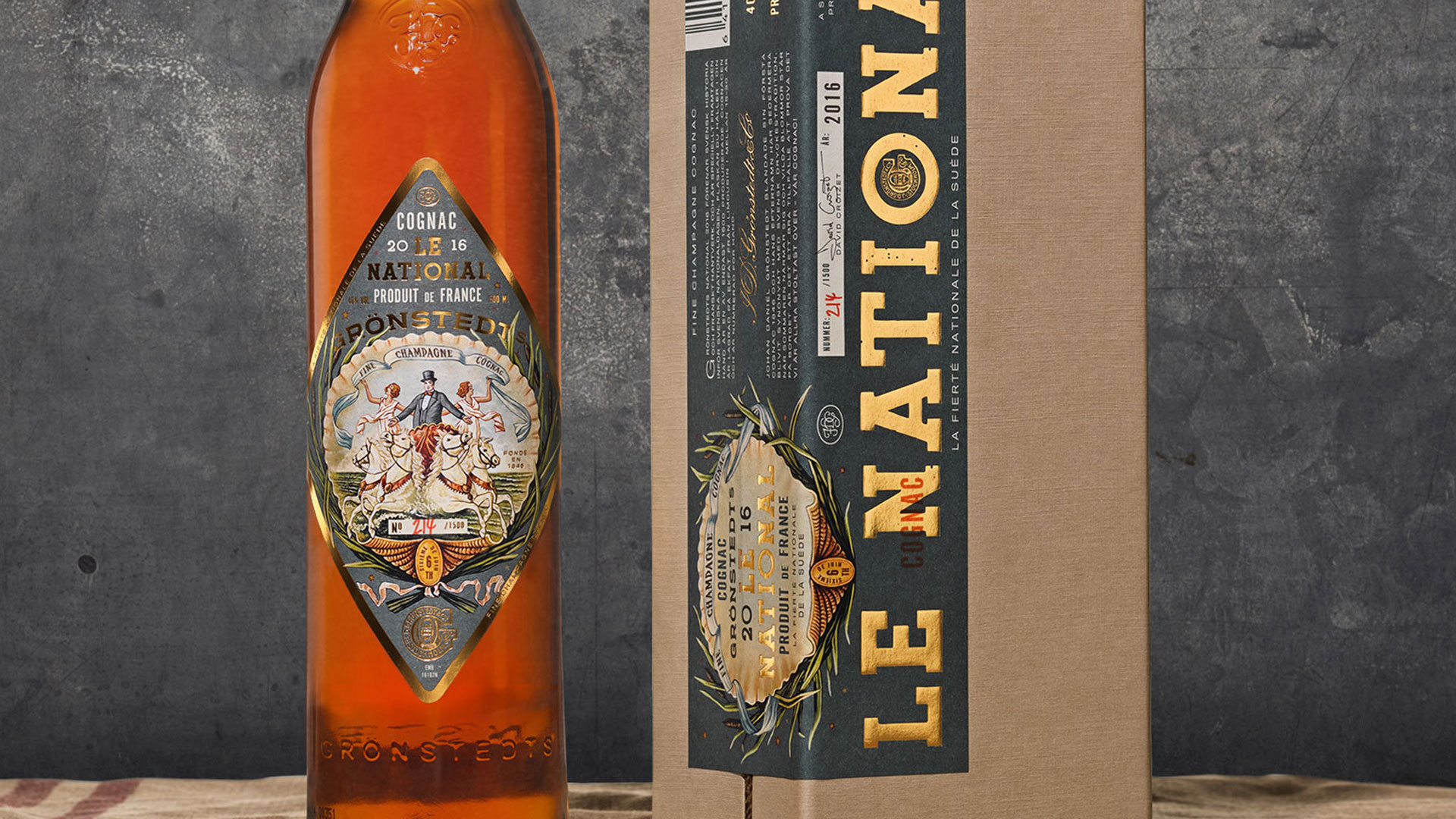