Coke is it for [Your Name]

The allure of variable-data printing is irresistible, even to corporate behemoths like Coca-Cola. Unable to contain themselves any longer, HP today announced that its Indigo WS6000 digital presses were responsible for the importation of the soft drink purveyor’s “Share a Coke” campaign to America this summer. Originally launched in Australia in 2011, the gimmick allowed the company to print bottle labels with more than 250 different popular names, as in “Share a Coke with Sarah.”

As WhatTheyThink.com explains it:

The project required the presses to run 24 hours a day, six days a week for about three months.

“To create a strong, durable label, able to withstand the fast speeds of U.S. bottling lines, a new substrate and a laminate construction replaced the original media and varnish overlay technique used in Europe. Coca-Cola Red Ink was reformulated to accommodate the new substrate, and the updated color was maintained across all U.S. print providers’ HP Indigo digital presses to ensure color consistency worldwide…” 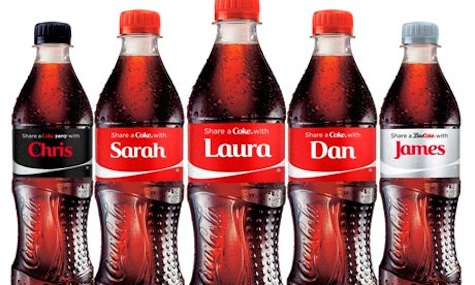