(Letter)press the Pedal to the Metal

Heaven knows there are those days. Days when you find yourself turning away from the Adobe InDesign that refuses to open to daydream about doing something romantically creative instead.

A little over a year ago, Ms. Kyle Durrie (let’s get this out of the way right now: “My parents just liked the name, said I’d be a Kyle if I was a boy or a girl,” she explains) hit the road in a customized 1982 Chevy delivery truck to take her letterpress work all over the United States in a project she dubbed “Movable Type.”

In November 2010, she put together a Kickstarter.com campaign to raise $8,000 toward startup costs; six weeks later she’d raised $17,000. Naturally she offered several appropriate incentives during her Kickstarter campaign: handprinted postcards mailed from five stops along her journey (for $25); postcards, an 11 x 17 limited edition print and 50 business cards (for $100); etc. 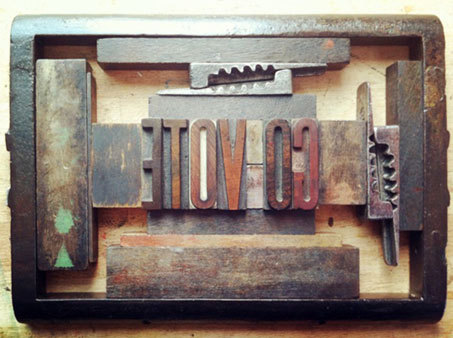 A good thing she overshot her initial goal, too, as the truck itself cost about $4,000, and another $10,000 was spent on mechanical repairs, wiring, ventilation, insulation, structural work and cabinetry, she says.

About nine months after coming up with the idea, she hit the road in her van, which she equipped with:

The latter “was originally used in a [Wisconsin] Sears department store to print all the in-house signage and advertising,” she explains. “It’s a very simple flat-bed press, capable of printing a pretty decent poster size. Its limitations are in the level of precision it offers – it’s not great at registration, is very slow, and you ink it by hand with a brayer (roller), so the inking is inconsistent. But for printing simple posters and signage, it works great. It’s perfect for the truck since it’s easy for people to gather around it and it’s very simple to set up.”

She put a good 31,000 miles on the truck during her first big tour last year, and another 2,000 since then, she says. As for paper, she will print on pretty much anything on the road – “whatever I can get my hands on. I get paper donations from time to time, and I don’t have much of a budget for nice paper. In my business, I typically work with recycled chipboard or Neenah Environment recycled cardstock.”

Though the Kickstarter fund drive was crucial to getting her on the road, she continuously arranges talks at art gatherings, sales and demonstrations at weekend markets, and basically anything she can think of to keep her gas tank full and her wheels moving.

“I was shocked that the $17,000 was all depleted before I even hit the road last year,” Durrie admits. “It all went into the truck and into financing my (very modest) life while I worked on the truck and prepared for the trip. That became a full-time job, so I had to cut way back on my paying print work in the months leading up to my departure. To make money on the road (all of which goes directly into the gas tank), I sell my printed cards and posters, and I always put out a donation jar. Most places I visit don’t have a budget for visiting artists and can’t pay me to be there, so small individual donations from folks who visit the truck really help me out. If I’m at a place that does have a budget (university, library, etc.) I’ll request a stipend, which is a HUGE help.”

Though the many photos and occasional videos Durrie posts on her website are testament to the fun she’s had following her dream, it IS a dream she’s living in recession-era America, which means money continues to be a big issue. Power and Light Press, the Portland printshop she began in 2009, has proved difficult to run from the road.

“I had an intern helping out for a while, but it got too difficult to keep the business up and running while I was away,” she says. “I ended up putting the business into ‘hibernation’ mode for most of this past year, and then crossed my fingers that I could pick up my wholesale accounts again once I got home. I was able to salvage most of it this past summer, and now I’m trying to balance things a little better… the travels and the business. The business is really a priority these days.”

Check out Durrie’s online calendar to see if and when she’s headed to your town, to see first-hand what it looks like when you ditch everything to follow your dream.

A former writer and editor for USA Today, Aaron Berman covered the newspaper industry for the Newspaper Association of America’s monthly magazine, Presstime, and is author of the forthcoming book “Soap: The Inside Story of the Sitcom that Broke all the Rules.”