The next time you begin to doubt the power of design, remind yourself of the great gnashing of teeth experienced by The Bath Magazine in the UK in response to its February cover. The controversy stems from the similarity of the British magazine’s hearts-made-of-running-shoes cover celebrating the Bath Half Marathon to Boston magazine’s 2013 cover honoring those slain and wounded in that year’s Boston Marathon terror attack. The Boston cover went on to be printed as a poster, with proceeds going to the One Fund, a charity aiding victims of the attack and their families.

“Late in the process of creating our front cover we were made aware of the Boston Magazine cover, and while we were inspired by it, we realize we have made an error of judgment by not fully realising its connotations in the States . . . I am running the Bath Half [marathon] on March 2nd and as well as supporting many of our local charities, the magazine will be making a contribution to the Boston One Fund.” 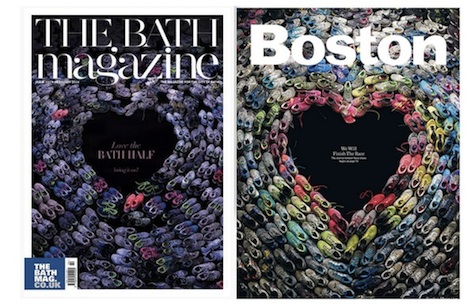 The whole public exchange between the two magazines was conducted with grace and decorum, a model for such disputes.

Above all, the incident serves to remind us that though the Web has given us a unique opportunity to draw inspiration from all over the world, we need to be ever mindful of the cultural associations some of those designs may carry with them.