Postcards from the Edge…of the Road

There’s something uniquely freeing about working with paper to create something one of a kind.

Increasingly, it seems that printmakers the world over are adding to that freedom by taking their art on the road. 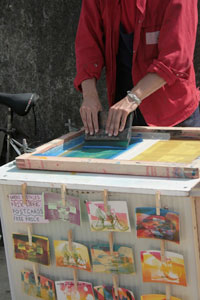 Quentin Bodin and Luc de Fouquet – a pair of artists in Nantes, France – built a silkscreening studio on wheels and towed it by bicycle for 10 days throughout the country, printing postcards in public gathering spots in several places along the way.

Each one- or two-color piece celebrated travel, and featured the name of whatever city they were in at the time printed at the bottom. The cards were given away for free to the crowds that gathered….AFTER the prints had dried on a clothesline strung between their bicycles, that is.