Watching the world’s marketing professionals trying to come up with the ideal way to bridge the gap between print and smartphones is a lot like watching a chimpanzee trying to solve a Rubik’s Cube. You know he’s smart enough to do it, but you also know you’re in for a very long, slow learning process as he tackles the challenge.

Over the holidays, GAP employed old-fashioned smartphone texting technology – or SMS, to give it its proper name – as part of its “Make Love” campaign (which isn’t nearly as interesting as it sounds, but never mind).

Over a three week period, GAP chose customers at random to whom they gave “Love Notes” – paper sheets that encouraged their recipients to text “BFFs” to an SMS shortcode. Those customers then received Passbook offers such as two free drinks at a nearby hotel bar or a 15% discount on a Barnes & Noble NOOK e-book reader. 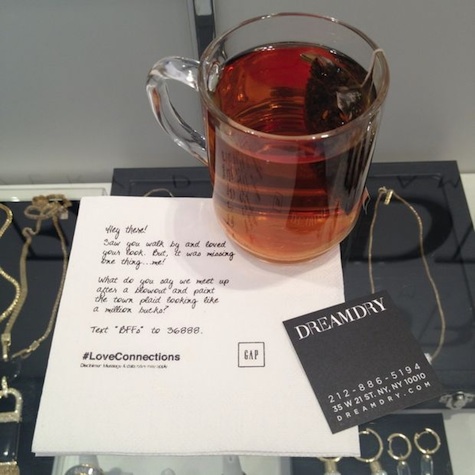 The initiative was designed to appeal to Millennials (we forget which generation that is, but we’re going with “young whippersnappers”). Unfortunately, we’ve seen no data confirming that this campaign did any such thing.

More importantly, we’re not sure how exactly these sheets were given to GAP customers. If they were handed to them in-store at checkout, it’s a nice gesture but they’re already in the store, making this the GAP equivalent of those coupons that automatically print out at grocery store checkout stands. And if these were mailed to GAP customers, what am I going to remember about it: That it came from GAP, or that I should get over to the hotel to get a couple of free drinks?

And so the Rubik’s Cube continues to turn…