Every week we see designs that amaze, inspire, and occasionally unsettle. This week, it’s a stomach-turning thumbs up from a photographer, a Christmas card that keeps you in touch with loved ones, and a Banned-books poster with a little something to hide. (And as always, don’t miss our most recent Cool Cards of the Week.)

Justin Poulsen is a conceptual photographer, which basically means he’s not above splashing around a bit of gore to publicize a “zombie walk,” for example. To get the attention of potential clients, he’s loaded his portfolio on thumb drives…that he’s designed from silicone and hand-painted to resemble real severed thumbs. As he told PSFK.com:

“They’re shocking enough that they will stay in your mind, and the amount of work put into creating such a thing speaks for itself. If one likened promos to Christmas presents, this would be the carefully handcrafted personal gift instead of the hastily wrapped gift card.”

Each drive is packaged with a large square card featuring a picture of someone giving the “thumbs up” sign on the front (sans, um, thumb), and the legend “Stick out like a sore thumb” on the back.

Banned Book Week always puts us in mind of a third-party political candidate that we think talks a lot of sense, but hasn’t a hope in hell of being let anywhere near the nation’s steering wheel. You’re either one of those or one of those. Still, occasionally some really cool design comes out of these anti-censorship efforts.

Last year, Spindletop Design and Workhorse Printmakers designed this clever poster for Houston’s Brazos Books. We quote here at length from the font of all that’s cool: UnderConsideration:

“On the day of the event, attendees printed subversive secret messages atop pre-printed, die-cut, and scored propaganda posters with attached bookmarks that they could then use to decode each other’s messages….Additionally, the bookmarks were printed with a call to action and resources which could only be viewed by using another co-conspirator’s bookmark.

The finished piece was letterpress printed in two stages to allow printing onsite at Brazos Bookstore using Workhorse’s Challenge 15MA proof press moved in for the event. The pieces were die cut, scored, and printed with the red in advance. On the day of the event attendees printed the secret message, in light blue, which was obscured by the preprinted red.”

For more on this awesome design, including all the challenges each piece of this puzzle posed, check out the full story here. 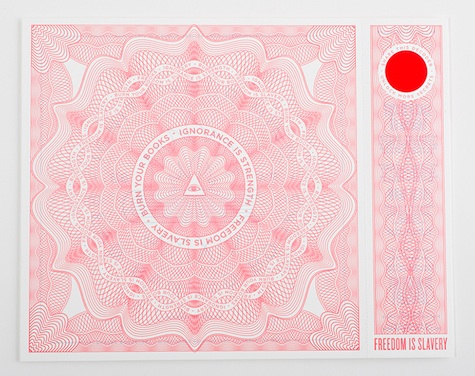 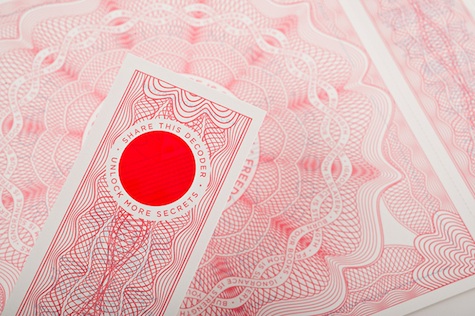 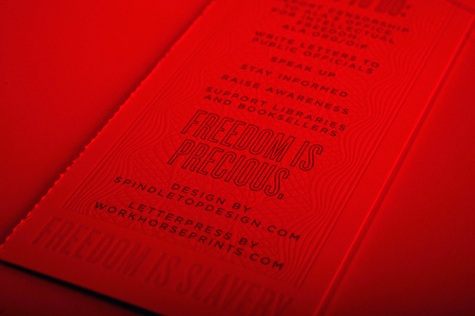 We can safely say that German creative agency Interone has pushed the greeting card beyond its limits with the Christmas card it developed with telecom company 02. Outfitted with a speaker, a microphone and a SIM card containing a pre-loaded phone number, the card places a call to that very number the moment it’s opened.

Leaving aside for the moment the tremendous number of “pocket dials” this is likely to generate, it’s a helluva tool for marketing. (Yes, our hearts are so cold and stony we’re skipping over the emotional implications and going right for the ROI.) Forget your call-to-actions, this forces your prospect to call you the moment they open your brochure – let’s see them wiggle out of a conversation that they didn’t even realize they were about to have! Sold! 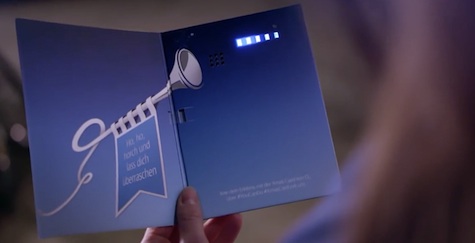