It’s late. It’s been a night of one bad hand after another. And if you can’t pull a winning hand out of the air soon you’re going to have some ‘splainin’ to do when you get home, about exactly how much money you’ve let slip through your fingers tonight. The latest hand is dealt and – can it be? – you see a steady fan of magenta!

Frankly we’re not sure how many high-stakes poker games will be played with the forthcoming decks of CMYK Playing Cards coming our way from London design studio Hundred Million, but that, of course, is not the point.

Based on a deck developed a couple of years ago to promote the firm, the cards are now on their way to mass production thanks to a successful Kickstarter campaign that’s already exceeded its funding goal of £3,000 by a good £2,733…and there’s still 23 days on the clock! 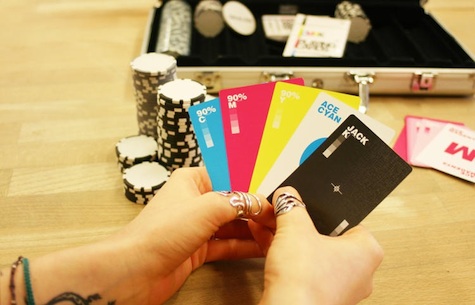 Here they give the perfect elevator pitch for their cards:

“A traditional deck of playing cards consists of 4 suits with 10 cards (not including face cards). All we had to do was switch the suits for colours of ink used in printed media (cyan, magenta, yellow and black) and swap the numbers on each card for a percentage of ink on the surface. The cards are just as useful as traditional printed styles, AND perhaps most importantly, all niche and only understood by people who are in our little design world.”

Decks are going for £9, or roughly $15 – penny ante, really, considering the pride of being the first designer on your block with these babies.