The shameless flirtations between computers and paper lately would be enough to make us blush if we hadn’t been around the block a few times on both sides of that fence.

Two weeks ago, Moleskine unveiled its Evernote Smart Notebook designed to make it easier to organize images of their real-world notes taken by smartphones.

Now Japan’s Casio has come out with the Paper Writer, a tablet computer/paper notepad hybrid. 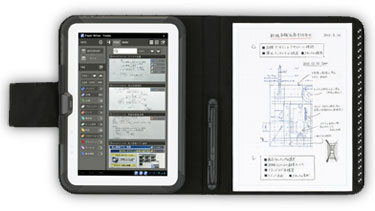 On the right side of the Daytimer-like folding case is a pad of white paper. On the left, a 10.1” tablet PC featuring a 1.5-GHz CPU and 16 GB of data storage running Google’s Android 4.0 operating system. Using the tablet PC’s built-in camera, you can take a picture of the notes you’ve made on your notepad and organize them digitally in the computer.

Its September release in Japan – the most technologically advanced country in the world – suggests that no matter how gaga we get over gadgets, there’s just no living without paper.