Iggesund Paperboard’s 2014 Christmas card takes its recipients on a magical journey from a forest setting to the city of Stockholm profiled against a sky gleaming with the northern lights. Iggesund has a tradition of using its Christmas card as an ambassador for paperboard as a material, and to display various printing techniques. This year’s edition was designed by Papersmyths of Bristol, England, who also managed the production as a whole.

The card is in the form of an altarpiece whose laser-cut doors form the outline of a forest. They open to reveal a city skyline in several layers, whose relationship to each other depends on how wide the doors are opened.

“In their turn, the building facades are profiled against a night sky with northern lights,” explains Iain Smyth of Papersmyths. “The shimmering effect is created with a clear holographic twinkling foil, with the moon and stars reversed out. The forest and city silhouettes are finely laser cut and decorated with spot UV ink stars, with Christmas greetings in silver foil blocking to create a really exciting scene. I wanted to convey the feeling of both the forest, which is the starting point for Iggesund’s products, and the Scandinavian winter night.”

The card consists of five parts, which were assembled into one unit. The complex assembly was done with the help of a team of undergraduate students in Bristol, but the task placed high demands on the participants.

“They needed a combination of deft fingers and good humor to succeed,” Smyth adds.

To give the card even more of a Christmas touch, a special envelope was created to underline the idea that this is almost a Christmas present. The envelope has an elegant closure which makes the most of Iggesund paperboard’s tensile strength.

The card was printed by Taylor Brothers in Bristol and the laser cutting done by Lasercraft of Huntington, England. 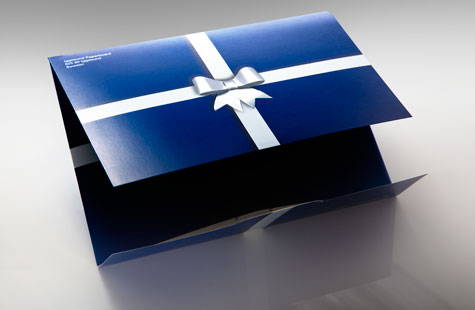 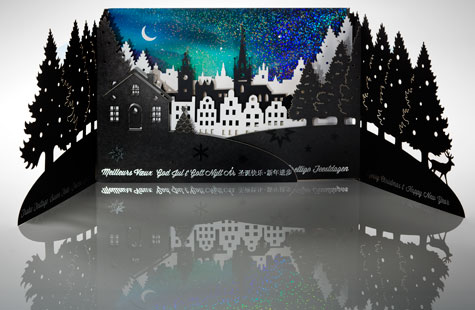