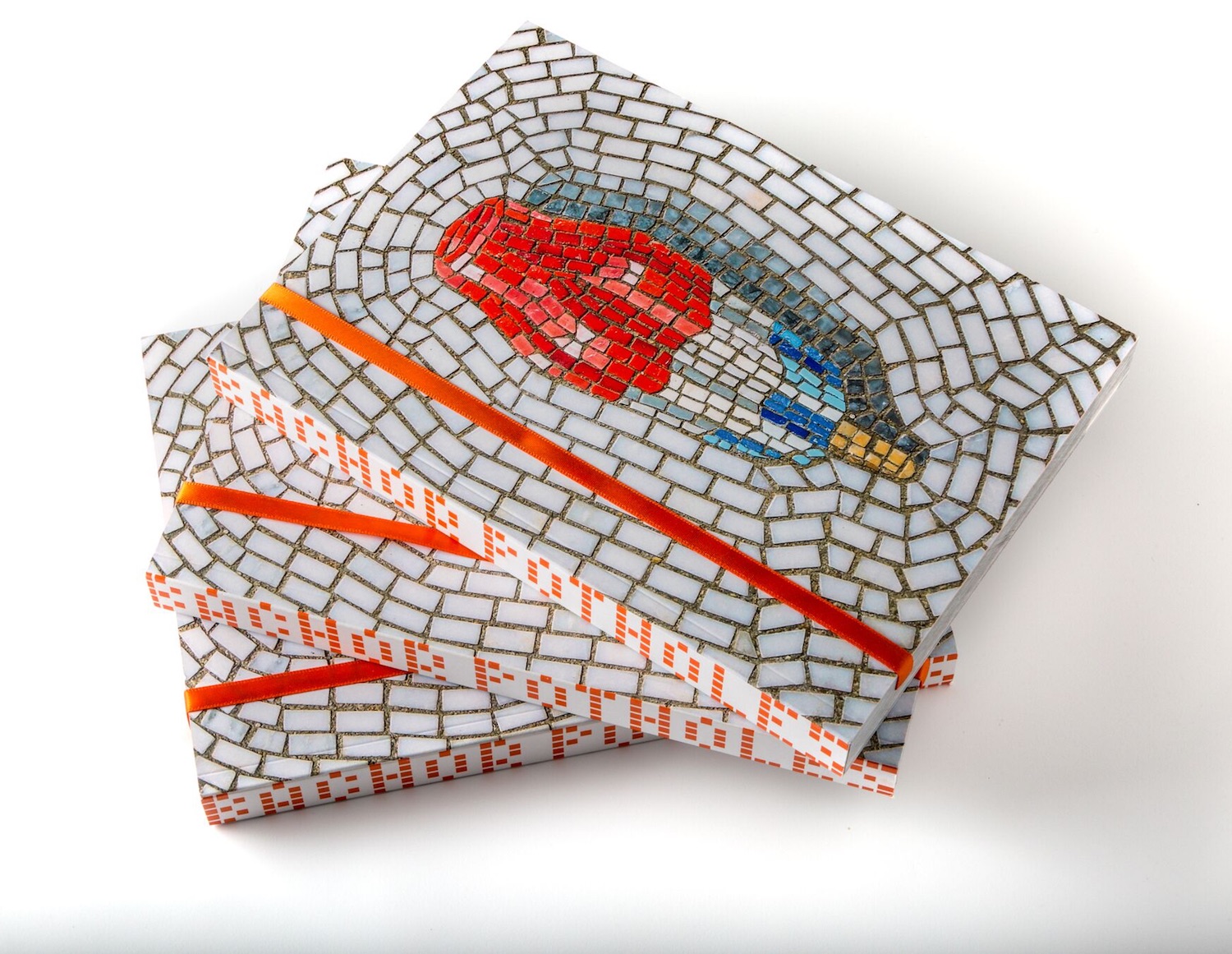 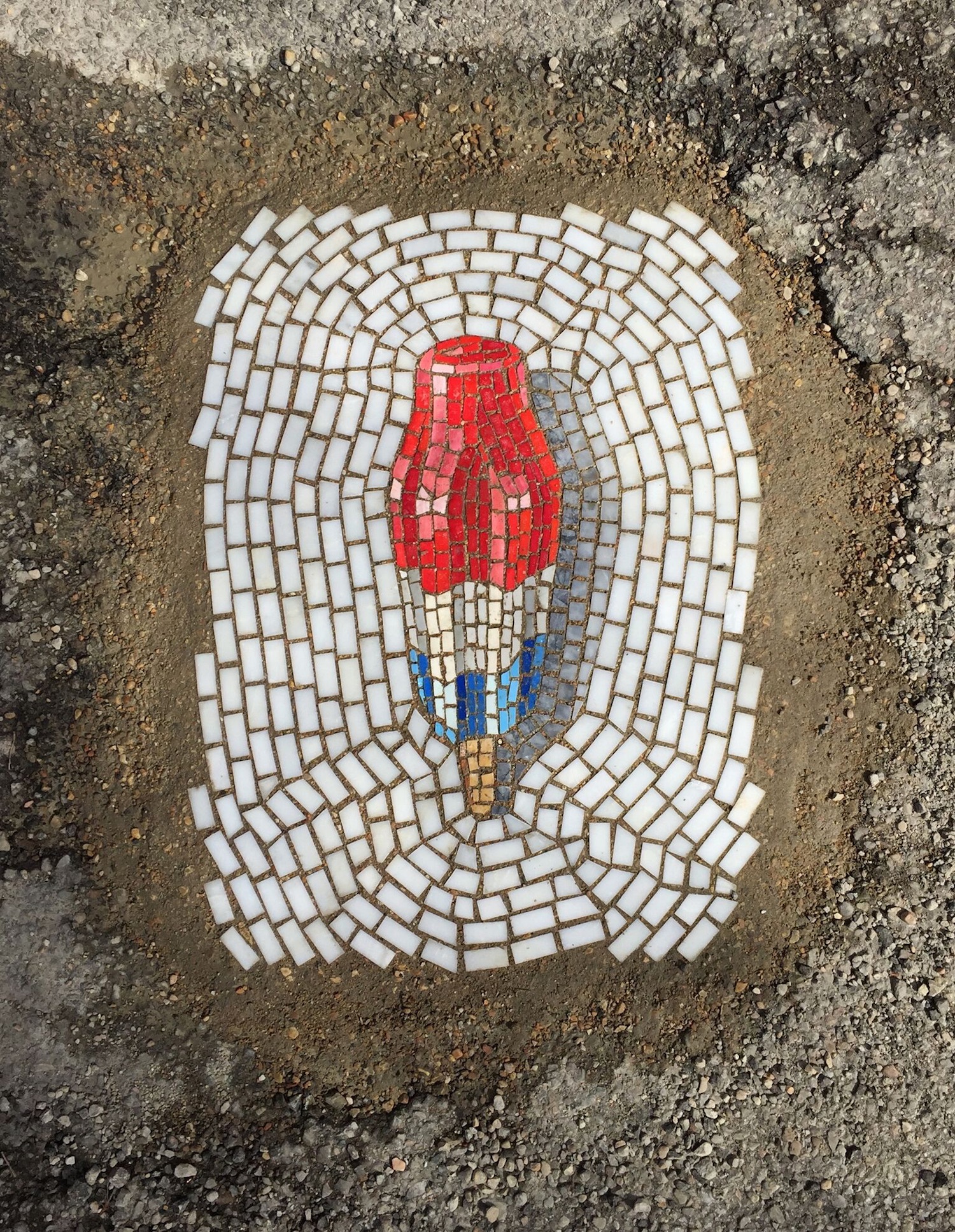 And like everything touched by the ephemeral, by the time you come across Bachor’s masterpieces printed in this volume, there’s every chance their real-world versions will be gone. If you can’t make it to the Windy City to see the real things, close your eyes, place your fingertips on the embossed cover with its retina-searing Bomb Pop artwork, and feel those mosaic tiles. 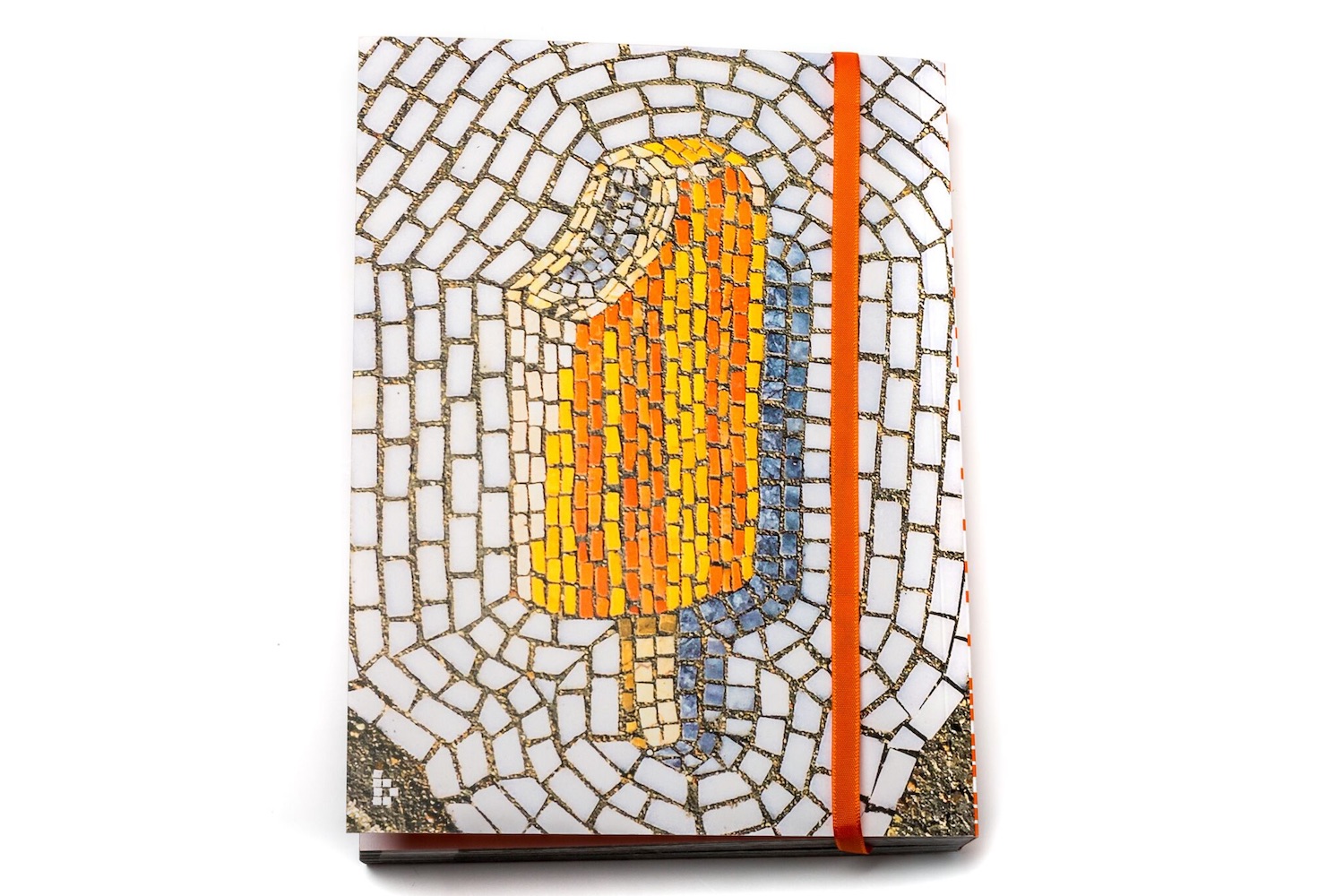 “It’s kind of impossible to capture what a mosaic is all about until you actually see it, because texture is such a part of the art form,” Bachor explains. “But that embossing on the cover is kind of a hint to an integral part of what mosaics are all about.”

Potholes by Way of Pompeii
Since 2013, Bachor has dodged Chicago traffic and refined his craft by filling potholes with his imaginative creations. In another life, he spent nearly 25 years as a designer in Chicago’s advertising world and 10 years as co-owner of a small marketing firm.

But that was then.

Initially inspired by the ancient mosaics in Pompeii that survived that city’s infamous volcanic destruction, he set about immortalizing the treats and detritus of our own land (smashed beer cans and ice cream bars, among others) in pothole installations. Yet he quickly came up against something just as unforgiving as Pompeii’s volcano: Chicago’s Department of Transportation.

“Once a piece was done, sometimes they would last two months and then the street would be repaved,” or the whole street would be pulled up, he explains. And so he posts images of his work on his website and social media. Yet there is something deeply unsatisfying about this potentially indestructible art existing only as pixels on a screen. What he needed was an honest-to-goodness art book. 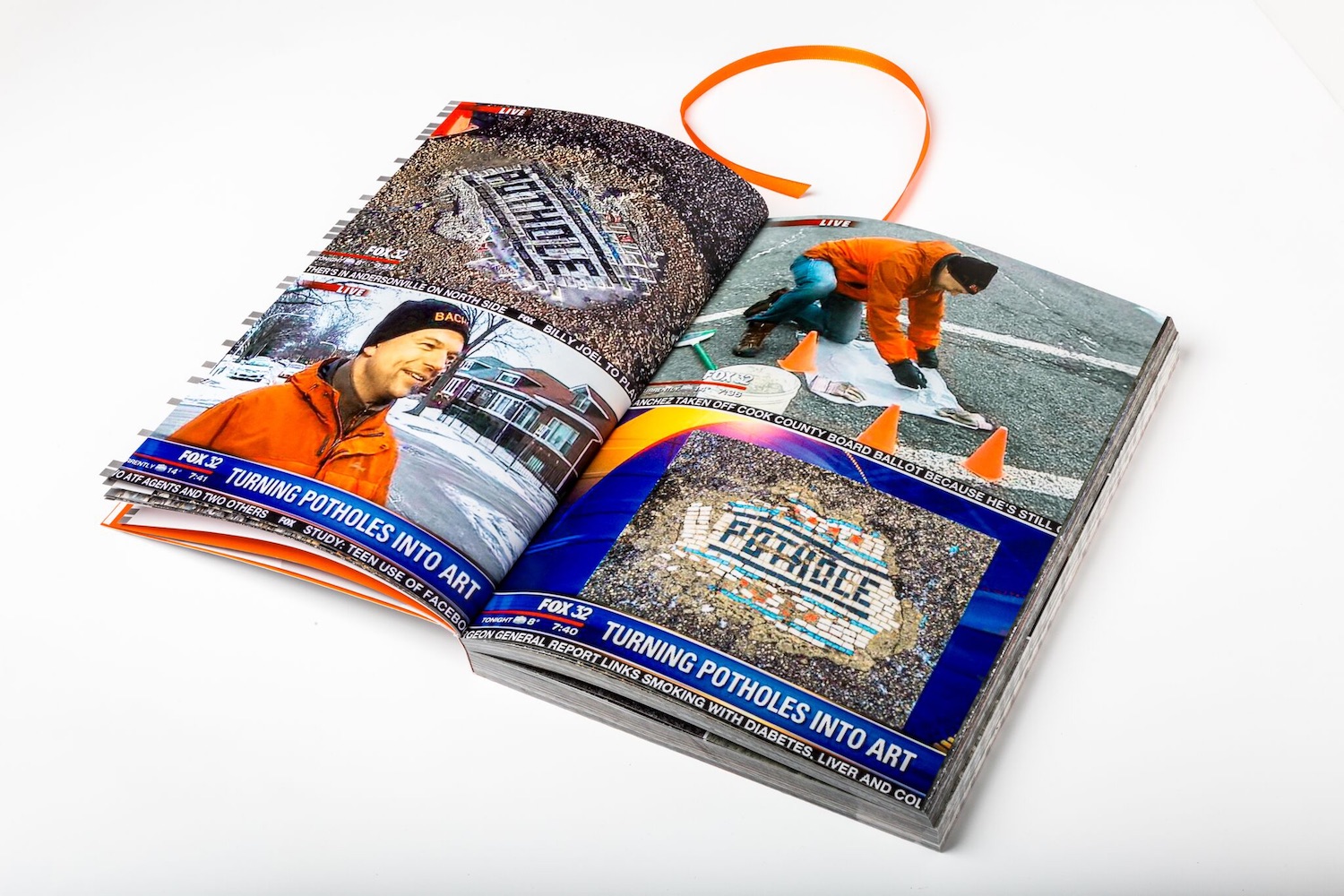 Going ‘Crazy with the Eye Candy’

Bob Hayes is a Johnny Appleseed of printing, never quite so happy as when he’s slapping down the latest ink-and-paper miracle printed by his Chicago firm, Active Graphics, on a client’s desk. Even before Bachor came his way, Hayes, a longtime Chicagoan, knew his work from the streets.

“It’s technically illegal what he’s doing,” he says with a laugh, “but who wants to stop art?” That Hayes later discovered that Bachor went to art school with his son-in-law just goes to show how small Chi-town is— one more tile-like detail in the mosaic of the Potholes book.

The artist hooked up with Galambos + Associates—a backer of the artist’s pothole-art Kickstarter campaign—to design the book, and Galambos brought him to Active.

“He only wanted 200 copies,” Hayes explains, “and we wanted to show off the high fidelity of our [HP Indigo 7800] digital press. We needed something that lent itself to bright colors.” They couldn’t have asked for a better showpiece.

Galambos “went crazy with the eye candy” in the book, Bachor enthuses, “and the printer went crazy with inks.” Part of that craziness involved Active’s use of two additional colors—the artist’s signature orange and purple—in addition to CMYK. Says Hayes, “the real key to all this was in prepress, making sure we had the images color corrected so they looked like his mosaics.” The Domtar Cougar paper Active used is one of their two go-to sheets for digital printing.

However, it is the use of a full-cover emboss that elevates Potholes from good to great. We’re not talking a sculptured emboss here, either, but a standard die job (single level), says Hayes. However, the press’ sharp definition and vibrant colors combine with the emboss so well that you could easily believe you were running your hand over an actual mosaic piece.

“The tactile feel of the cover sneaks up on you,” Bachor admits. “You get it in your hands and you get that sense that something’s going on here.” 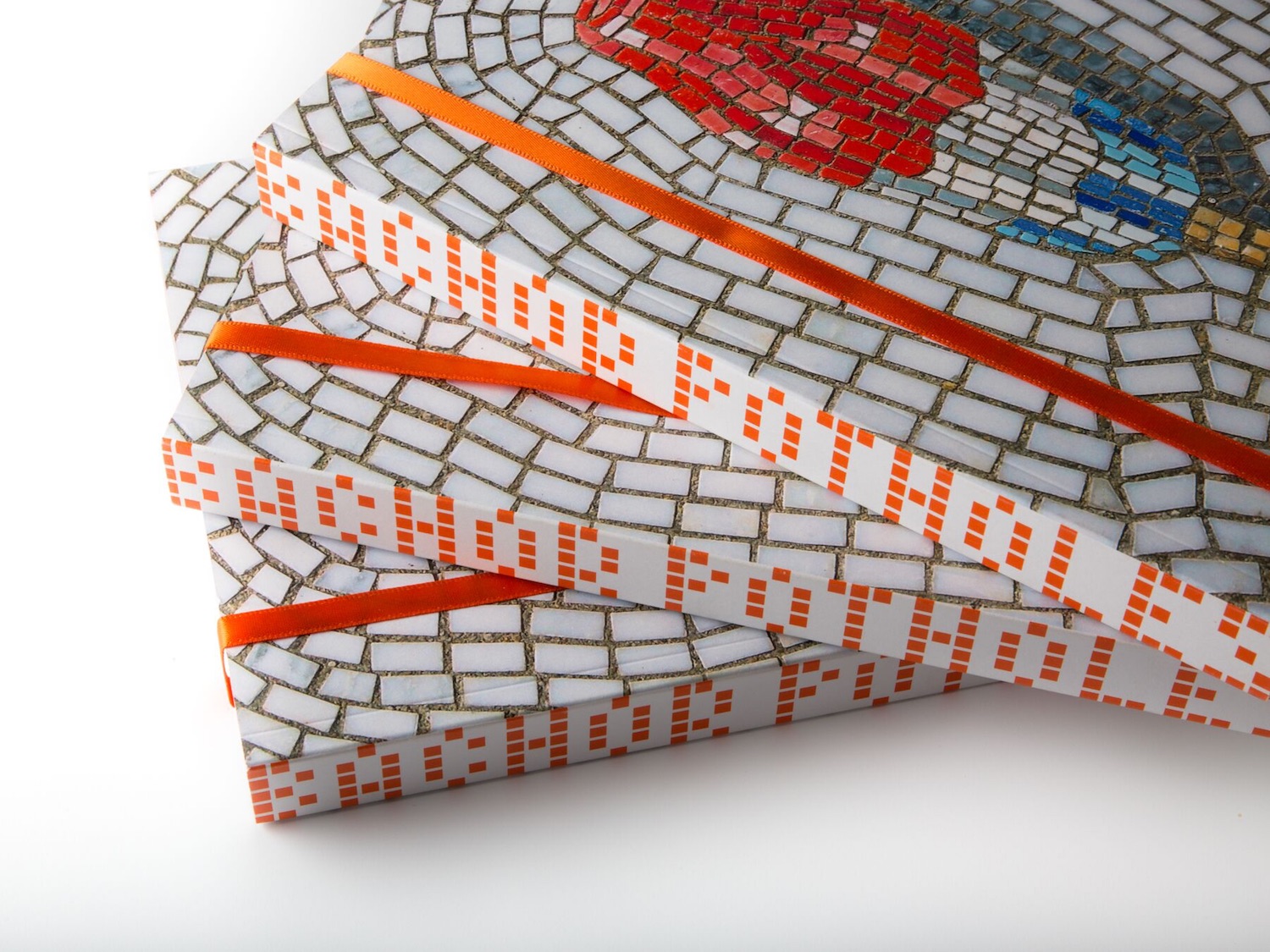 Potholes and More Potholes
Of the 200 copies printed, 125 were set aside as signed and numbered limited editions, while 49 went to backers of the 2016 Kickstarter campaign.

“The book has really helped him quite a bit,” Hayes observes. “One of the local TV stations did a little five-minute feature showing the thing— that was on a Sunday. On Monday, he sold all the books.”

For now, Bachor is hard at work planning his next mosaic creations, as well as the next edition of his book (rumored to be a case-bound affair, should finances allow). In May, he briefly grabbed international headlines with the installation of a Russian-themed pothole mosaic with the single word “Liar” installed only a half block from Trump Tower—a red, white, and blue swipe at America’s largest political pothole on record. 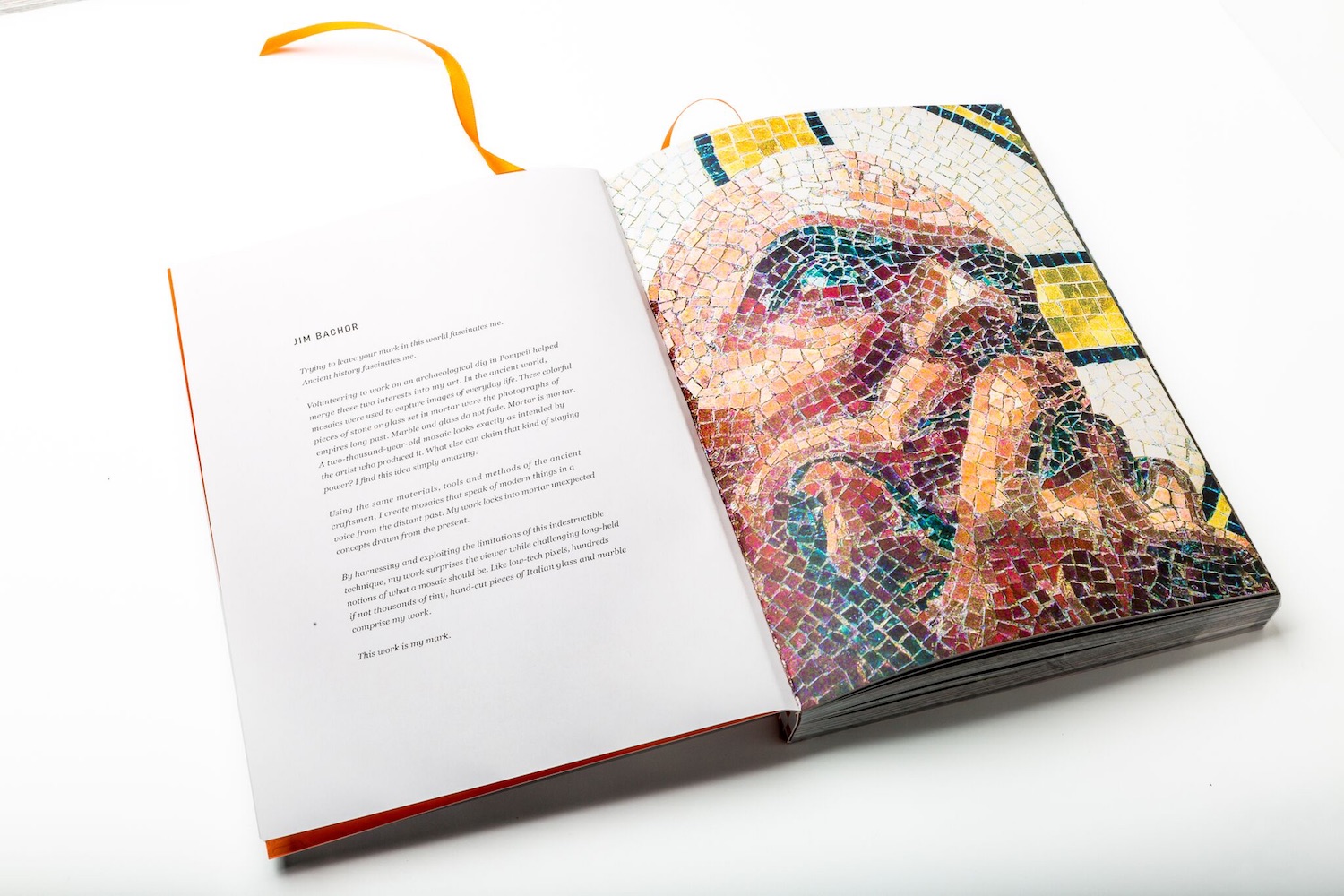 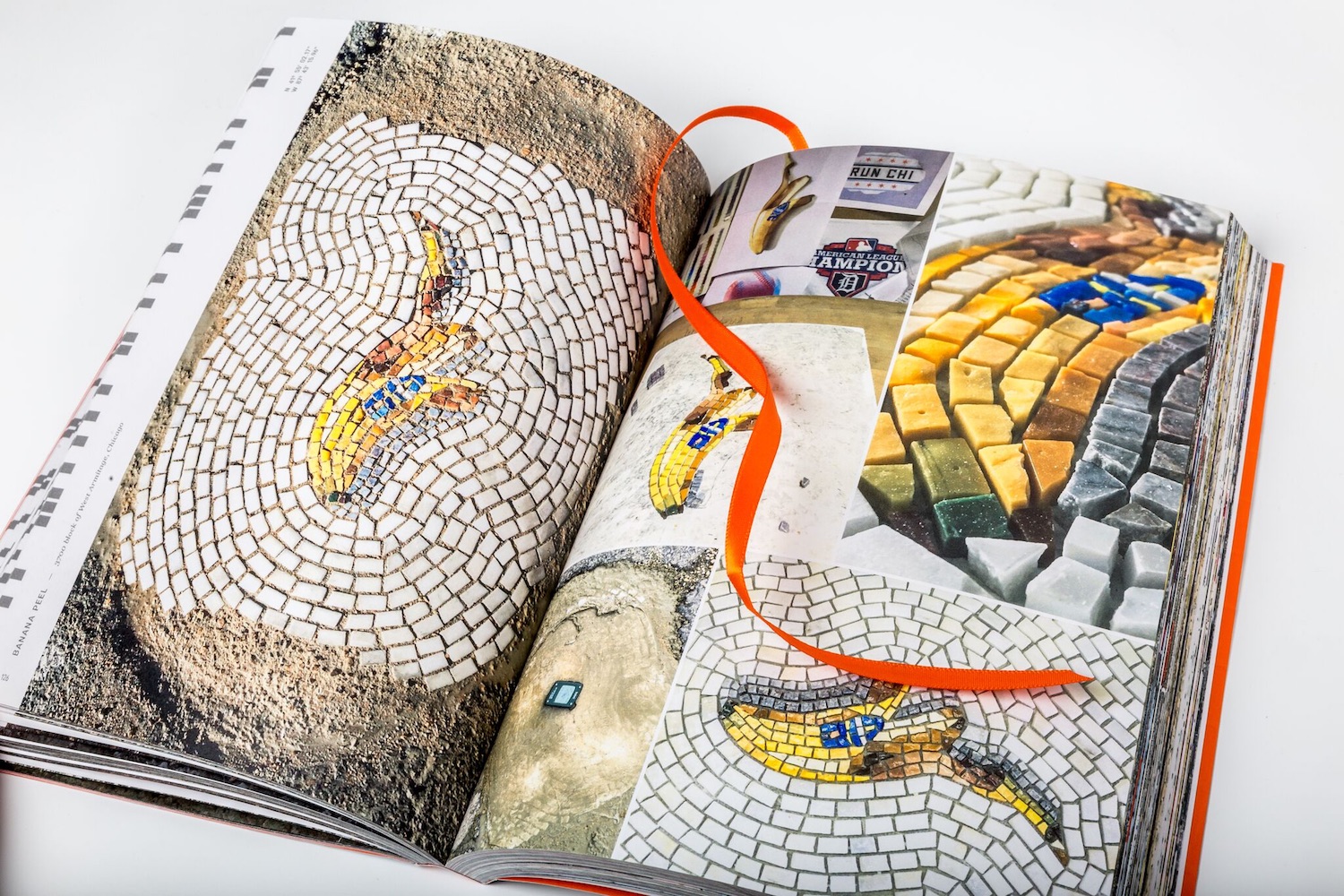 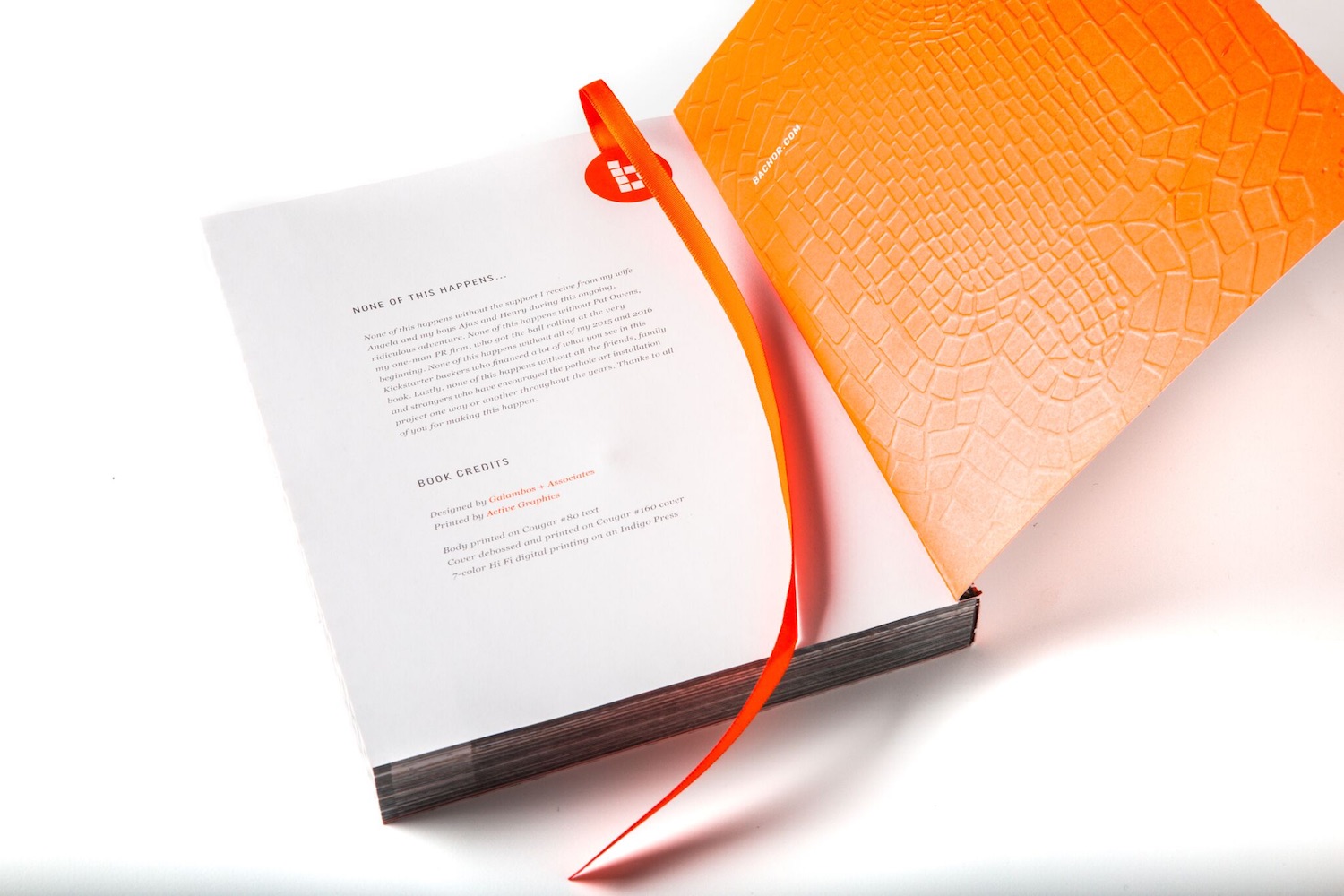