Who put the Wi-Fi in the Recycle Bin?

Must be nice to have a spare $60 billion lying around like Microsoft. You can do completely crazy things like promote your latest edition of Office by inserting a working Wi-Fi router in select copies of Forbes magazine. Yet the issue (which carried the unambiguous cover story “These Businesses Own the World”) also suggested one potential form that the seemingly inescapable print-technology marriage might take.

In the case of the Forbes-Microsoft partnership, the Microsoft ad insert inside the May 6th issue (printed by Quad Graphics) was equipped with a tiny router that accessed the Web by linking with the T-Mobile cellular network. Once activated, the magazine could be used as a gateway to the Internet for up to five devices, and could do so for at least three hours before being recharged. The service ended after 15 days. (Some complained about slow download speeds, but c’mon.)

As the “router” consisted only of a few wires, an LED light and a tiny computer chip, this is something that could easily be duplicated at a reasonable cost. Have a direct mail piece that you would like to change the content on from time to time to keep it fresh? Include a Wi-Fi router and micro-thin video screen and you’re in business.

And the terrorism-wary post office allowed the wired-up magazine to ship without incident? Funny you should mention that. “Far [fewer] than 40” recipients complained to Forbes and/or the Department of Homeland Security (accounts are hazy) because they thought the issue might be some kind of explosive device. 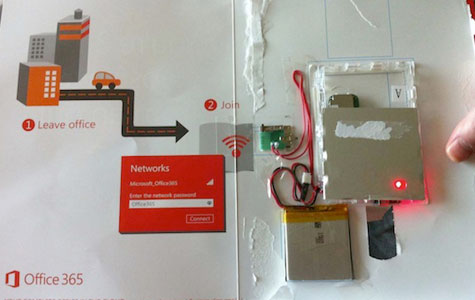