Every few months the press thumps its chest over the shopworn “Photoshopped models give young girls unhealthy expectations of themselves” story before treating us to another wave of Photoshopped models in their advertising. Several organizations, most notably Dove, have fought back against this with a number of campaigns – last year’s booby-trapped Photoshop action “Beautify” being particularly clever.

Most recently, American Eagle’s lingerie brand Aerie made headlines after announing that it will be deploying unretouched photos of more realistically sized models in its advertising from now on.

A bold move indeed, but what really fascinated us was a couple of lines in FastCoDesign’s interview with Aerie’s senior director of marketing, Dana Seguin, who gave us a whole new way to look at the issue.

“If anything it was more of a mindset change,” she says. “As a company and an industry we’re just used to retouching a scar or covering a tattoo, and that might’ve been the hardest part. Making sure nothing was touched. The girls are beautiful on their own. It sounds hysterical for anyone not working in the business but that might’ve been the toughest part.” 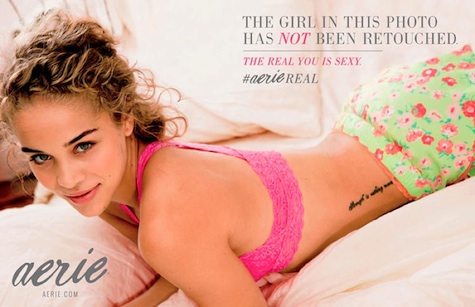