Prepare to Have Your Reality Augmented

If you’ve been keeping tabs on the churning sea of “augmented reality” solutions – you know, the technology that’s like QR codes but isn’t – your eyes are probably spinning like pinwheels by now. Forget QR codes that usually just send people to your website via their smartphones; today it’s all about giving them an “experience.”

That experience, dubbed “augmented reality (AR),” consists of three components – a special marking on paper, a smart-device app that can scan it, and a back-end technology that serves up videos, audio and other content on your device when that occurs. (Confusingly, there is a certain amount of cross-over between AR and QR codes, which we’ll politely gloss over here.)

AR applications have ranged from the ridiculous (often to be found in Lexus ads, for some reason) to the pretty neat. For the most part, what’s held back their widespread adoption is their hit-and-miss quality – both in terms of the experiences offered, and the range of companies providing the service. Last month, Mohawk enthusiastically entered the ARena, potentially changing all that.

The launch of Mohawk Live, an augmented-reality service intimately tied to the company’s paper products, solves some problems posed by other AR providers, and suggests some intriguing possibilities for the future.

How it works
While the company will begin to use Mohawk Live in its own marketing materials as a sort of proof-of-concept – its introduction in Mohawk’s recent Massimo Vignelli journal promo was elegantly understated ­– the real focus will be the marketing of the technology to you and me.

“I’m sold,” you say. “I have a new exhibit at the local museum I’m promoting through a direct-mail campaign; how can I use Mohawk Live to spruce up my brochure a bit?” Glad you asked.

1) Decide on the paper you want to use. You will need to use Mohawk paper as a condition for deploying Mohawk Live. This isn’t crucial to the technology, just a contractual precondition for using the service.

2) Decide on a “trigger” image or images. These are the images in your direct-mail piece that people will scan with their smartphones to start their AR experience (or “aura” in Mohawk Live parlance).

3) Put together your AR presentation. This can be any number of things, really. For our scenario, let’s say the museum has acquired some scraps from the Titanic, the basis of its new exhibit. You could create a 3D map of the ship that readers can poke through when they scan a photo of the ship on page 1. Scanning a photo of a particular artifact on page 3 brings up 3D images of all the pieces on display at the museum that readers can “pick up” virtually and view in 360 degrees. Interacting with the photo of the ship’s band on the back cover sets their phones to playing the song they played as the ship slipped beneath the waves.

4) Send trigger images and AR content to Mohawk. The AR materials are stored on Mohawk’s servers. Aurasma (what a name), the actual back-end technology used, is supplied by HP.

5) Print instructions for the AR features’ use on your piece. Like QR codes, the public is going to require a bit of handholding before it becomes second nature for them to scan things for AR content. In this case, you will want to direct people to download the free Mohawk Live app from Apple’s App Store or Google Play. After that, a few words on how to use the software will be necessary. You will mark “playable” images on your piece with a special “M” icon. 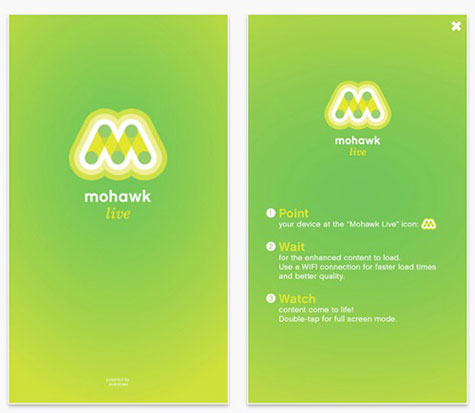 The bigger picture
In the introduction of any technology, there’s always a need to explain the benefits of your product without scaring off your potential clients.

Mohawk’s greatest aide in doing this will be the brand loyalty it’s established over the years with its pre-existing paper customers.

For all of the “next big thing” hoopla that’s surrounded the development of AR technology, not many people are likely to come across it, or even recognize it when they do. However, designers who frequently pore over Mohawk swatchbooks and promos will encounter these AR prompts more and more.

Once they give in to their curiosity and see what is possible, chances are good that they’ll want to experiment with it themselves, and suggest it to clients. And rather than having to spend valuable time searching for just the right AR company that they’ve never dealt with before, they can simply ring up their Mohawk rep and go from there.

Finally, Mohawk Live’s fortunes may be tied in part to the company’s ability to express a philosophy espoused by its vice president of marketing, Bart Robinson.

“It’s not a circus trick… .We believe there’s still a place for print. We believe that you can still separate yourself from your competitors with print. And we believe there is some feeling of what we call ‘scroll fatigue’ – people are wanting a break from that. This gives you that break. These pieces give you the ability to sit down and enjoy content [on paper] and then, if you want to get out your [smartphone or tablet], you can see even more.”

A former writer and editor for USA Today, Aaron Berman is the editor of PaperSpecs, and covered the newspaper industry for the Newspaper Association of America’s monthly magazine, Presstime. He is also author of the forthcoming book “Soap: The Inside Story of the Sitcom that Broke all the Rules.” At present he’s campaigning to have his reality augmented for the better.