This may or may not be a first for publishing, but it sure won’t be the last. We’re talking about graphic novel/art-book publisher Fantagraphics Books, which is currently drumming up dollars via Kickstarter to fund its spring publishing season. The publisher, which has been doing its thing since 1976, hit a bad patch this year when founding partner Kim Thompson developed and died from lung cancer in a matter of months. The lost income from the 13 books put the publisher’s spring season, and its very existence, in grave doubt.

So Fantagraphics quickly turned to the creatives-equivalent of the car boot sale: a Kickstarter campaign. To date, they’ve already pulled in nearly $7,000 more than their $150,000 goal with 22 days still on the clock. The idea now is to aim for $200,000 to further finance the 39 books they have scheduled for the 2014 April-August season.

The publisher’s offerings are eclectic, from mainstream properties like a complete multi-volume collection of “Peanuts” comic strips and “Walt Disney’s Donald Duck” to cult favorites such as the Hernandez brothers’ 30-plus-year “Love and Rockets” series. 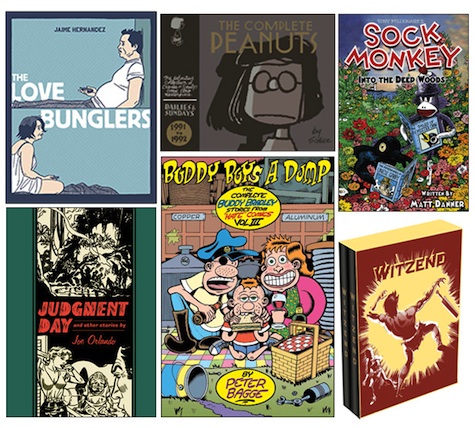 While it has to be emphasized that this particular publisher has been cultivating its audience for nearly 40 years, the idea of crowd-funding a  publishing season is one that could work for any number of boutique publishers. Anyone who’s financed their own book line, or indeed their own paper passion project, is encouraged to get in touch. There might be a cookie in it for you 🙂