The Identity Crisis of Nordic House

The following piece of detective work – which originally appeared on Christopher’s professional blog – is an entertaining example of how design, no matter how engaging, is only one part of the larger branding puzzle.

I’m a big fan of the Mexican design agency Anagrama. Their work is clear, bold and strikingly simple. So when I learned that the Monterey, Mexico-based firm had recently launched a project for Nordic House dry cleaning in San Francisco, I couldn’t wait to check it out in person.

If you haven’t already seen it on Pinterest, The Dieline, Adweek or any one of a number of Tumblrs and other blogs, here’s a look at this clean design for a typically dry industry (pun intended).

Every detail is considered: from the “take-a-number” ticket design to the suit bags to the dry cleaned shirt wrappers (although professionally dry cleaned or laundered dress shirts are usually hung—not folded—to avoid wrinkling). They even have a branded duffel bag to stuff your just-pressed clothes into for the journey home.

In another unusual twist, Nordic House also sells scented body soaps—and commissioned Anagrama to create the packaging for those as well—right down to the embossed logo on the bar itself. So, so cute! No wonder people love this branding program so much. It’s a designer’s dream.

But when I tried to visit the dry cleaners, I ran into some problems. First of all (according to Siri) Nordic House isn’t in San Francisco at all, but across the bay in Berkeley (then again, Siri couldn’t find Mission Street in San Francisco). Nevertheless, I decided to make the trek to the East Bay in search of this holy grail of fluff-n-folds. 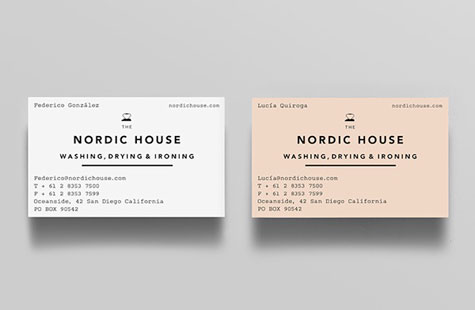 When I arrived at the shop, I was saddened to discover that Nordic House was not, in fact, a dry cleaner but a purveyor of foods from the five Northern European countries that are its namesake. Equally sad, they refused to launder my shirts, although I was able to procure some medisterpoelse.

And then things started getting weird.

I checked the Web address on the business cards and, sure enough, it points to www.nordichouse.com, but that address has been owned by the pickled herring providers since 1996.

Then I checked the mailing address on the card and noticed that the shop is in San Diego, not San Francisco after all.

Hopefully Anagrama will update their website soon, since everyone who is posting about it keeps saying it’s in SF (such a tease!).

It was at this point that I decided to enlist the help of my friend Dave. He lives in San Diego, loves minimalist design, and prefers a little bit of starch in his collar. Sadly, the address on the business cards is incomplete. The cards list a P.O. Box, which is definitely too small to accept a suit (my friend Dave is kind of a big guy). What’s more, they forgot to include the box number. That’s a pretty important detail, but at least they remembered to monogram the soap. 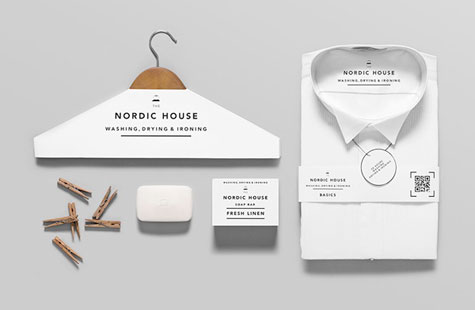 Dave was a little confused by the unconventional typesetting (Oceanside, 42 San Diego California) and couldn’t tell if Nordic House was in San Diego or nearby Oceanside. He got hopelessly lost trying to check out both. Neither Siri nor the ZIP code were any help. Siri couldn’t find San Diego, and the ZIP code on the card…is in Sri Lanka. In the end he decided to take his clothes to TierraSanta. Their identity isn’t as groundbreaking as Nordic House’s, but they’re on the map and get 4.5 stars on Yelp.

Having exhausted Google, Yelp, Siri, the US Postal Service (and the patience of my friend Dave), I decided to give Nordic House a call. I dialed the number on the card and a nice woman with a pronounced accent picked up. But hope once again turned to disappointment when I learned I had reached Finch, a production company in Sydney, Australia. They were very polite, but declined to press my slacks.

And so the hunt continues. I am determined to find this beautiful, design-savvy dry cleaning shop whose mold-breaking identity has earned designers’ praise for its “honesty and clarity” and client accolades for being “independently-minded.”

More than anything, as a San Francisco designer I’m a little jealous that Nordic House had to go all the way to Mexico to find a design partner. It truly seems like a dream job, for a dry-cleaning business that may only exist in dreams. 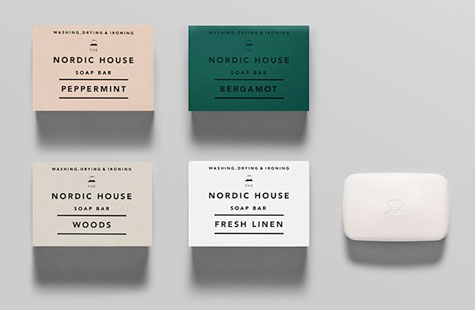 Christopher Simmons is a San Francisco-based designer, writer, educator and design advocate. He is the principal/creative director of the noted San Francisco design office MINE, where he designs and directs projects for a variety of clients, including Facebook, Microsoft, Wells Fargo, The Nature Conservancy of California, Chronicle Books, Simon & Schuster, Obama for America, and a diverse mix of nonprofit and entrepreneurial clients. His work has been exhibited at The Museum of Contemporary Art in Hiroshima, The Pasadena Museum of California Art, The Museum of Craft & Design, The Smithsonian Institution, and is part of the permanent design archives of the Denver Art Museum.