We are absolute suckers for any attempt to do something different with the printed book, which is why we dropped our M&Ms (gah! when will this Halloween candy disappear?!) the moment we glimpsed the promo video for “S.” by Doug Dorst. As a print piece, this tome seems to have it all. There’s only one thing that lays a cautionary hand on our thumping heart: it was “created” by JJ Abrams.

A young woman picks up a book left behind by a stranger. Inside it are his margin notes, which reveal a reader entranced by the story and by its mysterious author. She responds with notes of her own, leaving the book for the stranger, and so begins an unlikely conversation that plunges them both into the unknown.

From what can be gleaned from the photos and video of the volume, publisher Mulholland Books has gone all out. Pages are “aged” yellow with the different annotations in different colored ballpoint-like scrawls and underlinings. (There’s even a library tag on the spine.) Between the pages are removable photocopies of newspaper articles, postcards with redacted addresses, a filled-out greeting card with a yellowed news clipping, and some manner of a cardboard spinner wheel. We would love to know how this book was actually printed….

To be sure, there have been some swell book gimmicks over the years. Probably the one this seems the most reminiscent of is Nick Bantock’s “Griffin and Sabine” trilogy, which is told through removable postcards and letters. (Though the notations remind us of a far more rare and obscure work: MK Jessup’s “The Case for the UFO,” a copy of which had allegedly been sent to military officials annotated by aliens. There was a copy of this on our shelf growing up, which should explain a lot.) 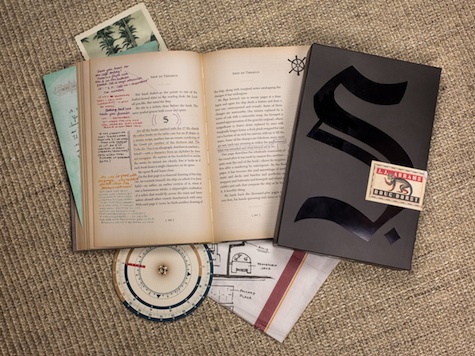 As excited as we are to see this book in person, there is the “JJ Abrams” factor. Though he’s redeemed himself a bit recently with the “Star Trek” film reboots, he remains in the dog house for the appalling way he ended that mass-American-freakout called “Lost.” We want to believe, JJ, but you’ve broken our heart before….