Good heavens, it’s almost February and we’re still catching up on all the creativity and good-natured gusto that went into December’s holiday cards. Anyone who grew up on the old Road Runner vs. Coyote cartoons may get a smile out of Pentagram New York’s holiday treat: the Coyote v. Acme mini-legal brief.

Based on original designs by Pentagram London partner Daniel Weil, the piece was designed by Michael Bierut and Jesse Reed, and reprints a 1990 Ian Frazier story from The New Yorker. In it, the author imagined the litigation that Wile E Coyote would bring against the company that sold him all of those defective items he used to try to capture the Road Runner. 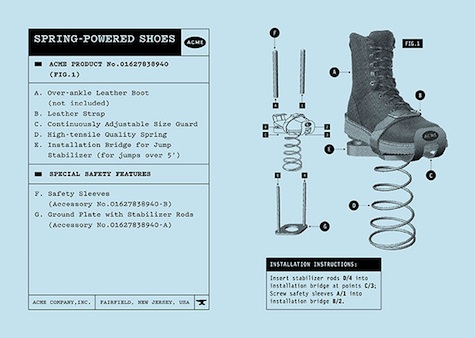 Throughout the brief we’re treated to diagrams of several of the items that Coyote purchased. The whole whimsical piece was printed on Mohawk Superfine by Allied Printing. According to Pentagram’s blog:

“[It] has a proper legal blue back linen-mounted cover with brass loop stitching, and the text is set in the typewriter-like font Pitch. The designers also created an “official” Acme Company emblem that was applied to lab coats for a special reading at a private reception in New York in December.”

Just smashing. And here’s a little more from the post:

“So who is at fault, Coyote or Acme? Even when pressing his case, Coyote can’t seem to cut a break. Weil’s designs for the gadgets undermine Coyote’s legal claims with special safety features like ‘screw-in detonator’ for the Spherical Bomb and a ‘weighted armor jacket’ to be worn with the Rocket Skates. The look of the diagrams is inspired by the photo-realistic illustrations of the McMaster-Carr hardware catalog. But Wile E. skims over the fine print. As Weil tells Wired Design in a post about the project, ‘The Coyote, like most males, never reads the instructions.’ “ 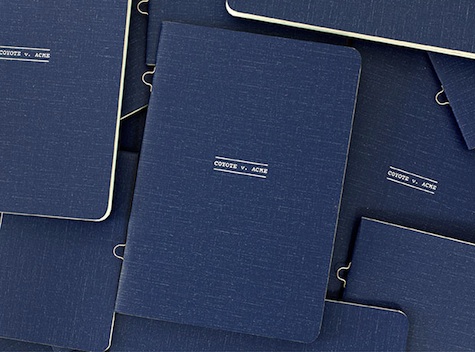