Domtar Continues to Push the Envelope

The paper vs. digital battlefield has been a pretty grim place lately, with the partisan resistance to Google’s “Paperless in 2013” campaign typifying the fierceness of the debate. Which is why Domtar’s latest “Paper Because” campaign is such a welcome change of pace.

Launched in September 2010, its first roster of humorous “Really Really Short Films” (most run 30-45 seconds) focused on the consequences of workplaces that seek to phase out paper entirely. In “Ration,” a manager imposes a 5-sheet-a-month limit on paper use in the run-up to going paperless, which sparks a vicious “Lord of the Flies”-like struggle over the last few packages of paper. 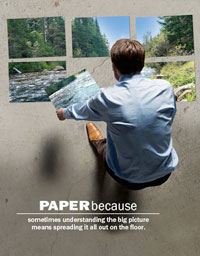 In February, a new slate of films switched gears and demonstrated the value of paper in other areas of people’s lives. In “Waiter,” a smug member of a restaurant’s wait staff insists on memorizing customers’ orders, and invariably gets them horribly wrong. “If you want to remember it, just write it down,” a screen card advises.

In “Anniversary,” a woman gives her man a beautiful anniversary card, only to learn that he sent her an e-card…which didn’t even reach her. “If you’re not saying it with paper, that’s saying something,” we’re told.

Though the campaign is buttressed by print ads in the likes of The New York Times and National Geographic, it’s clear that the videos are the driving force behind Paper Because. The average number of YouTube hits for the videos that are just a few weeks old? 73,000.

For more paper-based hilarity, may we suggest: