Your Design…in the 3rd Dimension 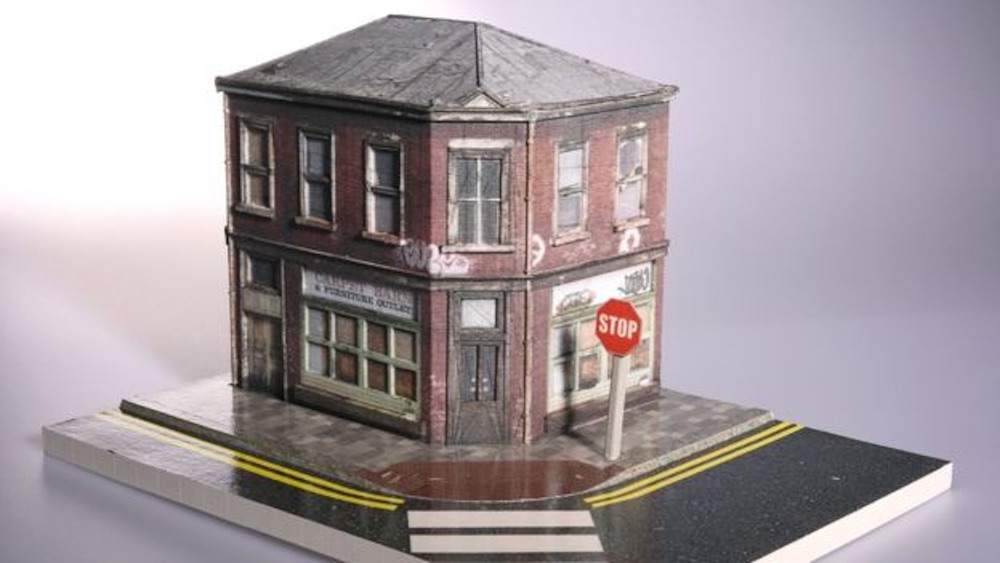 UPDATE: During the first week of January 2016, Mcor technologies launched the Mcor Arke, a full-color 3D paper printer for under $6,000 (you can see some of its handiwork above). The following article appeared in July 2013, demonstrating just how far the technology has come in a few short years.

Three-dimensional printing. Not since the birth of the Worldwide Web has one subject so dominated the media landscape that you could rightly call it an international craze. And for pretty much the same reason: 3D printing promises to make nearly any wish come true with a few keystrokes.

Yet, like the Web in its early days, no subject has been so greatly misunderstood as 3D printing, especially in the print-design community. The confusion probably lies in the term “printing.” Once some designers see an article about it, they assume it’s all about paper.

Actually, about 99% of 3D printing uses plastics, ceramics or metal to print everything from firearms to artificial limbs (a full-circle technology in that case, sadly). And all of which has been explained ad nauseam.

What hasn’t been so widely discussed is that far more intriguing technology: 3D paper printing!

The 3D paper printer
Paper-based 3D printing – or Selective Deposition Lamination (SDL) to give it its proper name – was invented by Irish brothers Fintan MacCormack and Dr. Conor MacCormack as a low-cost alternative to traditional 3D printing. Replacing the expensive (and toxic) raw materials such as chemically-infused powders and plastics with inexpensive, ubiquitous paper seemed ideal. And there were more benefits to come. (Note: Research and discussions with those in the 3D printing community have so far failed to turn up another 3D paper printer maker.)

The company they founded in 2005, Mcor Technologies, first produced the Matrix 300+, which printed black-and-white 3D objects. Their most recent machine, the IRIS, prints color ones. And the color has made all the difference.

You can make 3D objects out of paper…really?
Surprisingly, the standard printing paper used actually lends the 3D items a strength and durability that those made from other materials lack.

With the existing color 3D printers on the market, “you’re gluing a lot of small particles together – powdered material – and applying color, and it’s not that robust,” explains Geoffrey Doyle, CEO of Zip-Bit Inc., a leading 3D scanning and printing company in Silicon Valley. “If you drop an existing color 3D printer’s printed output, it can break very, very easily.

“But if you think about a paper laminated object, you get natural lateral strength because it’s single sheets of paper bonded vertically to create an object. You don’t have the same sorts of limitations.” That robust and full color output is part of what convinced Zip-Bit to become the Northern Californian reseller of IRIS printers, beginning this month.

Wonderful. But how do those printed objects look? In some cases, very remarkable indeed.

Two objects in particular have become Mcor’s showpieces for the IRIS. The first is a human face, complete with blue eyes and facial contours, that is creepily lifelike. The second is what appears to be an ancient skull fossil. Both creations are so convincing precisely because of the various shades of color layered throughout. Yet it may be a far more subtle creation – a half of an orange – that will wake many designers up to the possibilities of this technology. 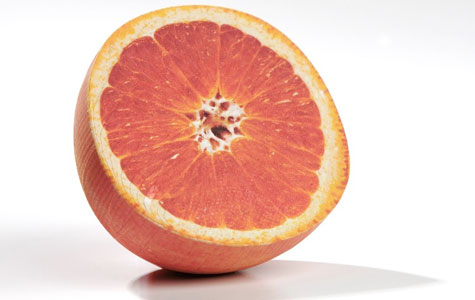 How does all this work?
As you can imagine, you’re not going to have a printer spit out a 3D replica of your client’s smiling face (you know the clients who will be thinking along those lines) as quickly as printing a color proof of a direct-mail piece. There’s a great deal more going on under the hood. Here’s how it works:

1. Create a 3D data file. Before you print your object, you need to get that information into the printer. Most mainstream 3D CAD software will allow you to save a 3D document as an STL file. (To create a color object, you will need software that saves your piece as a VRML file.) If your item is going to be a paper reproduction of an existing object, you can take the original to be scanned by companies such as Zip-Bit, which offer 3D scanning services.

2. Prepare the printer. After you’ve imported your file into the printer, manually add the first sheet of paper to the build plate – this will be the base of your creation. Close the printer door and select “Print” on your computer and on the printer.

3. Adhesive is applied to the sheet. At this stage it’s helpful to understand that your object will be printed in one solid block of paper – picture a ream or two of 8 ½” x 11” sheets stacked and glued into one big rectangle. Because of that, more adhesive is applied to the area on the paper where the object will actually be, less adhesive to those areas that will be removed and thrown away. (Recall the sculptor who explained his art by saying he took a block of stone and chipped away all the parts of it that weren’t the statue.)

4. A new sheet of paper is automatically added. The printer pushes down on this so that the new sheet and the first sheet bond thanks to the adhesive. (If this is a color print, there is an additional step. The printer pre-prints the color outline on each page using a modified 2D color inkjet printer. A barcode is also printed on each page to make sure the pages are in the right order. The sides and any overhangs are also colored appropriately.)

5. The paper is cut. A tungsten carbide blade traces the outline of the object, scoring the paper.

6. Repeat until complete. Again, adhesive is applied, another sheet added, the blade traces the outline, until the stack of papers is the height of your 3D object. The paper block is then removed from the printer.

7. Time to “weed.” In this instance, weeding means pulling off all the extraneous bits of compressed paper until you’ve completely liberated your 3D object from within. 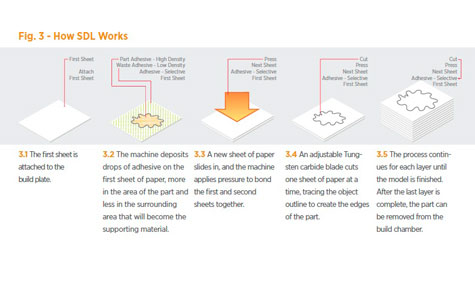 Why should I care?
First, let’s be honest here. What we’re really talking about is a printing technique that gives you a whole new dimension in which to explore your creativity. Why whip off another 2D map when you can create a topographical one? Why send another photo of a house when you can send a miniature version of that house instead? And so long as we’re speaking frankly, you have to admit that this beats the pants off of yet another iPad app.

Perhaps more intriguing still, many of the printing and finishing techniques you so love employing in your work now can also be applied as part of the 3D printing process. You can print things pre-embossed/debossed, pre-engraved – though getting down to fine details may be a bridge too far at present.

Additional finishes are currently being developed, too, says Mcor Technologies CMO Deirdre MacCormack. “Post processing is optional but we are working on a number of different water-based coatings that will allow a variety of different finishes. Some will make the parts very rigid and more robust, some will make the parts flexible or rubbery –you can select the finish that suits your application… . Everything from cyanoacrylate to car spray to anything you would use in the furniture industry will work on the models to provide a number of different finishes.” [See images below.] 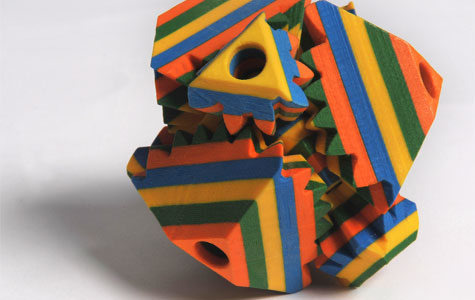 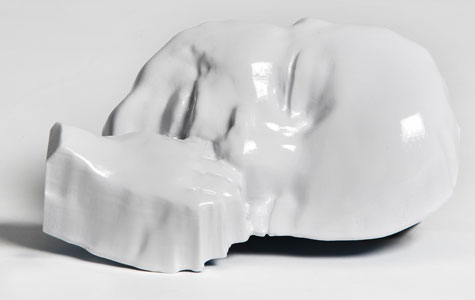 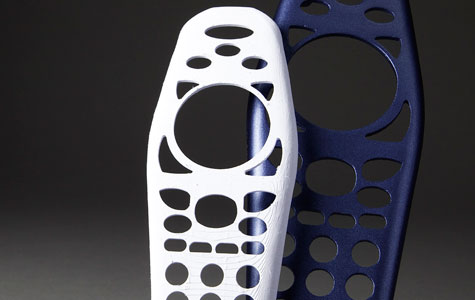 How likely am I to make a 3D print?
The one thing we haven’t discussed so far is cost. Though printing something in 3D using paper is about 1/5th the cost of doing so using other materials – items are claimed to be 5-30 times cheaper to print in paper form – you’re going to pay a premium. And at $47,000, you’re not likely to bring the color IRIS home; the b&w Matrix 300+ goes for $36,000.

What we’re really waiting for is a 3D paper service bureau of some kind, which may be coming soon. Already, Mcor has partnered with Staples to offer the service in its European stores first, and eventually will do so in the U.S., MacCormack says.

In the meantime, am I the only one who now can’t stop looking at various prints without wondering what they’d look like in three dimensions?

A former writer and editor for USA Today, Aaron Berman is the editor of PaperSpecs, and covered the newspaper industry for the Newspaper Association of America’s monthly magazine, Presstime. He is also author of the forthcoming book “Soap: The Inside Story of the Sitcom that Broke all the Rules,” and wonders if anybody reads this far into bios…