Like some of those exotic beer blends you come across while perusing your local grocery shelves, there are certain design combinations that make you think: Boy howdy, now why didn’t I think of that. Here’s an example that has been a major hit with our readers since we first mentioned it nearly a year ago: Beertone, a Pantone-like swatch deck…for beer.

If there’s a lesson to be learned from the story behind this crowd-pleasing product, it’s this: If something strikes you as a really good idea, chances are that other like-minded people will respond.

Once upon a midnight beer
It was Oct. 11, 2012, and Alexander Michelbach was working late (again) as interactive manager at a Swiss advertising agency that had recruited him from his native Brazil three years earlier. The only one left in his department, he was nursing a beer in the office. As he recalls, “I was looking at the beer glass over the table and I asked myself, ‘What’s the color of this beer?’ ”

Having a design background, his next thought was inevitable. What if there was a Pantone-like guide to beer that ordered them by color?

For the next two hours he scoured the Web looking for information on various Swiss beers, and typed up his basic idea in an email, which he sent to fellow employee Daniel Eugster (below, right). An hour later he called him and won him over with three simple words: “We can do it.” 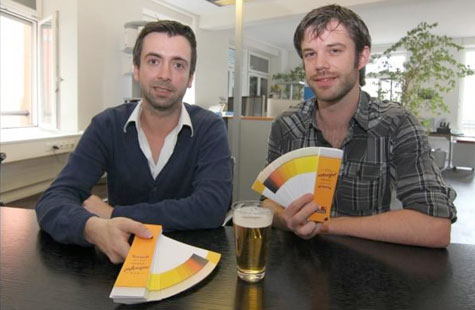 The Beertone heard round the world
Though both were passionate about beer, neither was sure that their idea would be embraced by others. In November 2012, they went live with their original URL, Beertone.ch, with some design previews and an explanation of what they had in mind.

“We had some contacts around the world, a few emails, but not as many as we expected,” says Michelbach. Everything changed two months later when the ColourLovers blog published a post about Beertone.

“From this moment, the project took on another level and got a lot of online buzz, getting posts and articles in different worldwide trend blogs and websites like Gizmodo, Trendhunter, Times newsfeed, Fast Company, and PaperSpecs –  that was the point that we knew that it can work.”

For the six months following the initial October inspiration, the pair worked feverishly to actually develop the Beertone swatch deck, with Michelbach traveling all over Switzerland to research what ended up being 202 different Swiss beers from 48 breweries. “In Switzerland, there’s a lot of beers that are only available in certain regions. That’s why I travelled almost the whole of Switzerland by train to get the beers [about 80% of them] in different states, because only a few breweries sent the beers to us.” 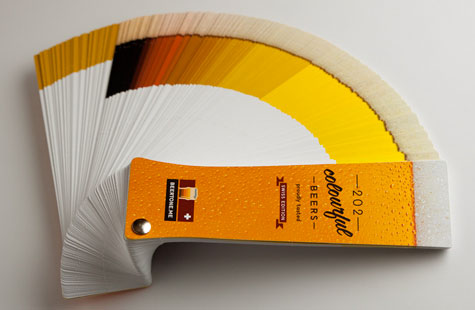 Proof is in the printing
The final product is a minor masterpiece of design efficiency, fitting 12 pieces of information onto a single side of a narrow swatch. These include:

In other words, what could easily have devolved into a throwaway novelty item to make a quick buck became a well-thought-out, handy guide to the world of suds.

Sales have been brisk for their two editions – German and English – but the pair also invested a lot of money into their production, including costs for traveling, translation, the spectrophotometer they used to measure the beer colors and, of course, printing.

Still, they continue with their plans to expand. In the works: a smartphone app. Of course that might take a while. They’re currently developing guides to German and Brazilian beers. They are also handling orders, as well as customer and press questions, all by themselves.

Says Michelbach, “At the beginning, we didn’t know if Beertone would work. But we decided to try because a lot of ideas stay on paper…or get forgotten.” 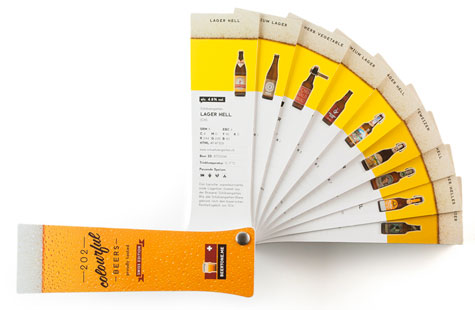 He is the author of the forthcoming “Soap! The Inside Story of the Sitcom that Broke all the Rules,” a five-year project that darn near finished him. (Whether it darn near matte finished him or gloss finished him he will not say.)