When cable network AMC of “Mad Men” fame wanted to contribute a little something to the gift bags given to celebrities at the Sundance Film Festival, they opted for a pair of warm and comfy Sorel boots to help ward off the post-holiday chill.

Since they couldn’t include the boots themselves without knowing each recipient’s size beforehand, they provided a $150 Sorel gift card instead. But how do you make a card stand out amongst all that other Sundance swag, some of which was worth thousands of dollars a piece?

Simple: They placed that challenge in the lap of today’s “Mad Man” of print, Highresolution’s David Drucker, who came up with a high-end gift card holder idea like none other.

Wanting to give the impression of the boots themselves, the printers first tinkered with a piece of Ashton faux leather they had in the shop, folded it in half and punched some holes in it, creating the basic form the cardholder would ultimately take. 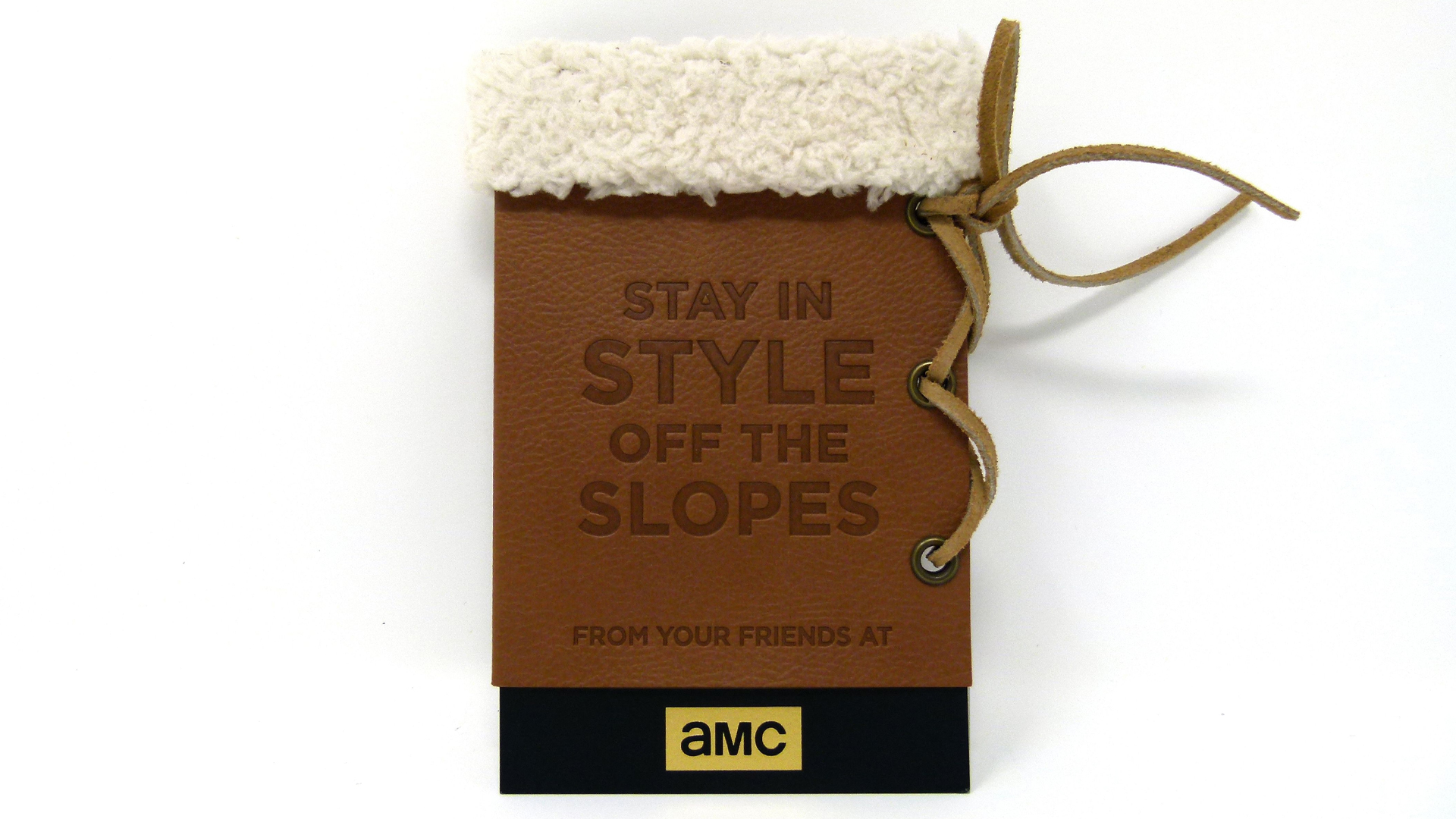 What Makes This a High-End Gift Card Holder Idea?

Though no strangers to the use of hot foil stamping (their sharp Tapestry Designer’s Notebook is a great example), Highresolution knew that one doesn’t “stamp” leather, faux or otherwise, but “brand” it to get that classic leather look. So that’s just what they did. “Stay in style off the slopes” was the message burned into the Ashton material using a super-hot die, creating a rich color that you simply don’t get from colored foils alone. It also makes for an eminently tactile creation that attracts the gaze as well as curious fingertips. 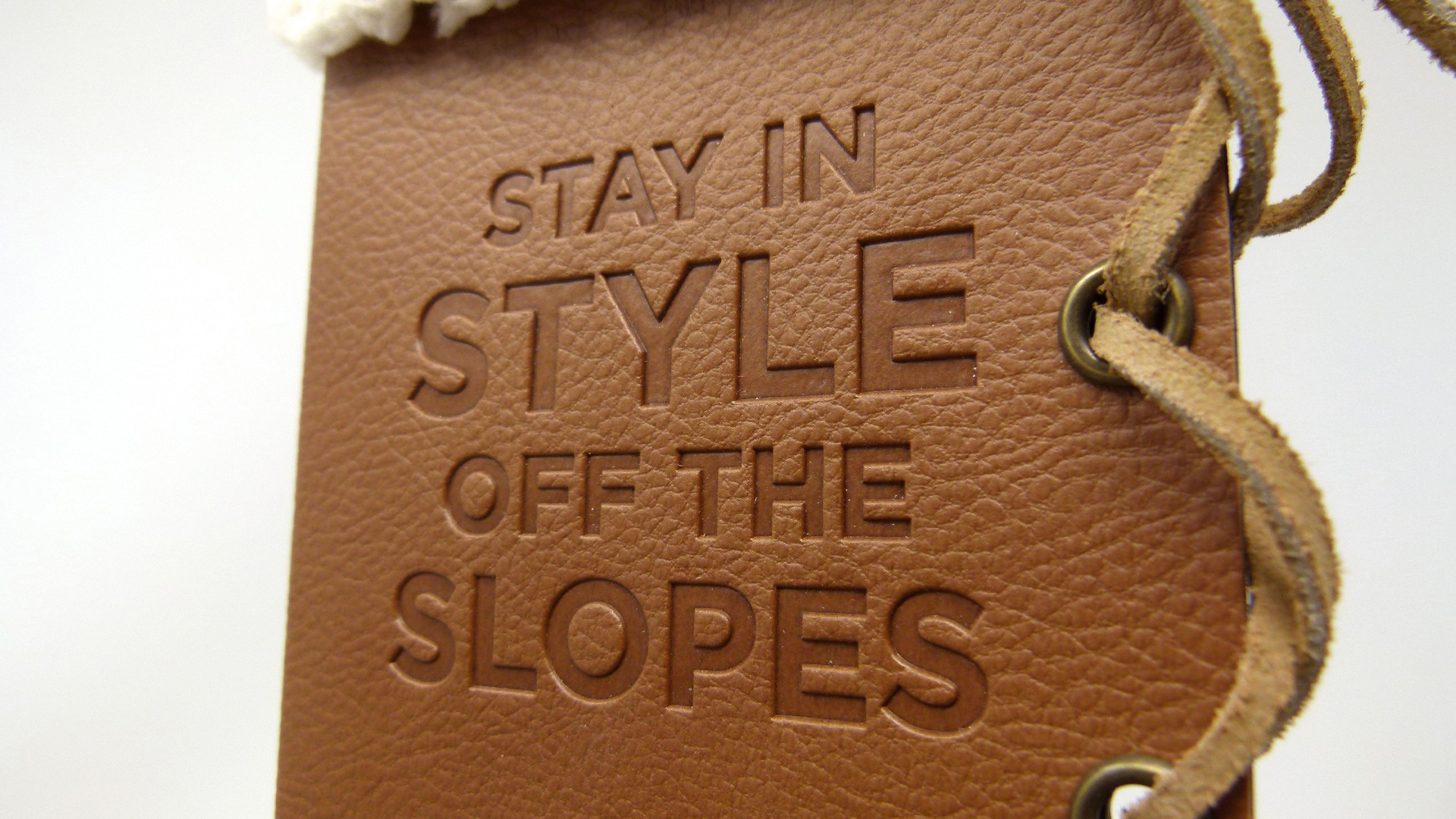 This was then glued atop a pouch made of Neenah Classic Crest Epic Black Cover [Get Swatchbook] which was soft-touch laminated, the AMC logo hot foil stamped on the surface. 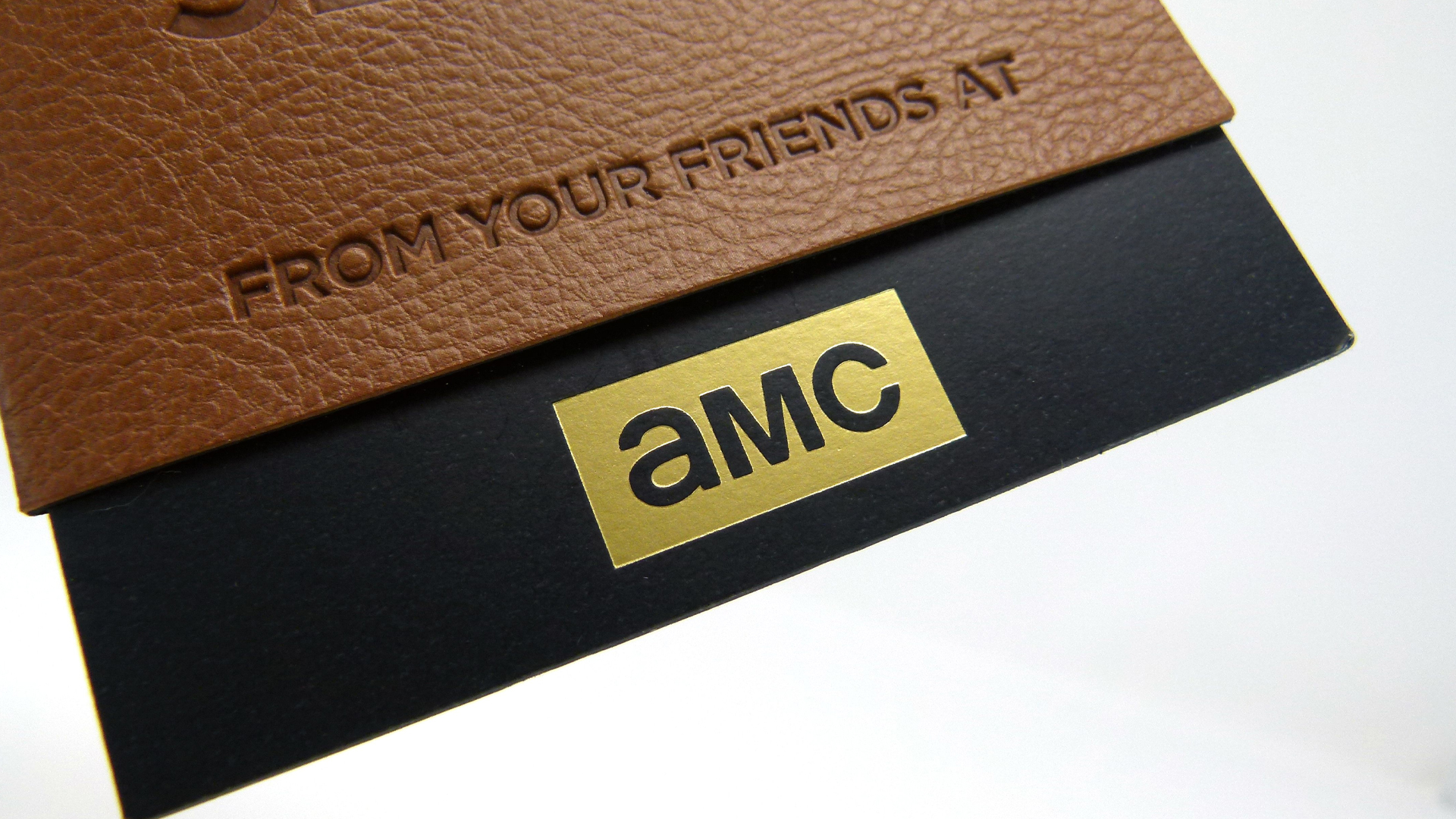 However, one of the biggest creative challenges arose with the addition of fleece to the top of the piece; anyone who’s ever tried to cut it will know why – it gets absolutely everywhere! Eventually they isolated this task to one area of the shop and took great pains to ensure no fluffs would venture into other projects. The fleece was cut to double the size of the card holder, and then folded and glued until it resembled the fluffy top of a Sorel boot. 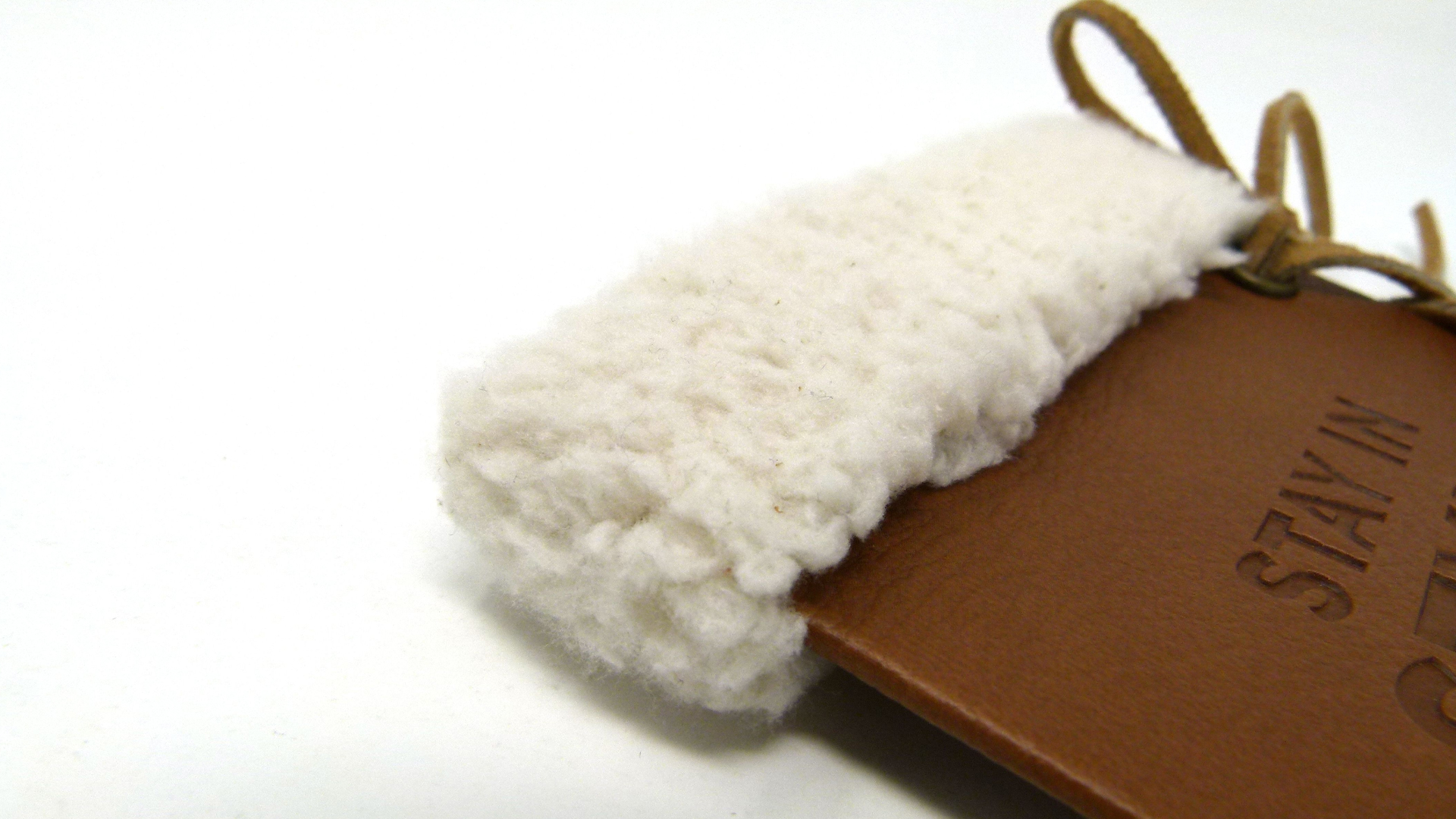 Finally, three holes were punched through both the faux leather and the Classic Crest paper. Grommets were affixed through each, and a length of leather lace threaded through them all. One of the things you learn when working on a project like this: It’s not as easy to lay your hands on leather laces for 200 pieces as you might think.

Needless to say, absolutely everything you see here was done by hand, right down to the little Velcro dots placed inside each holder to keep the gift cards safely inside. 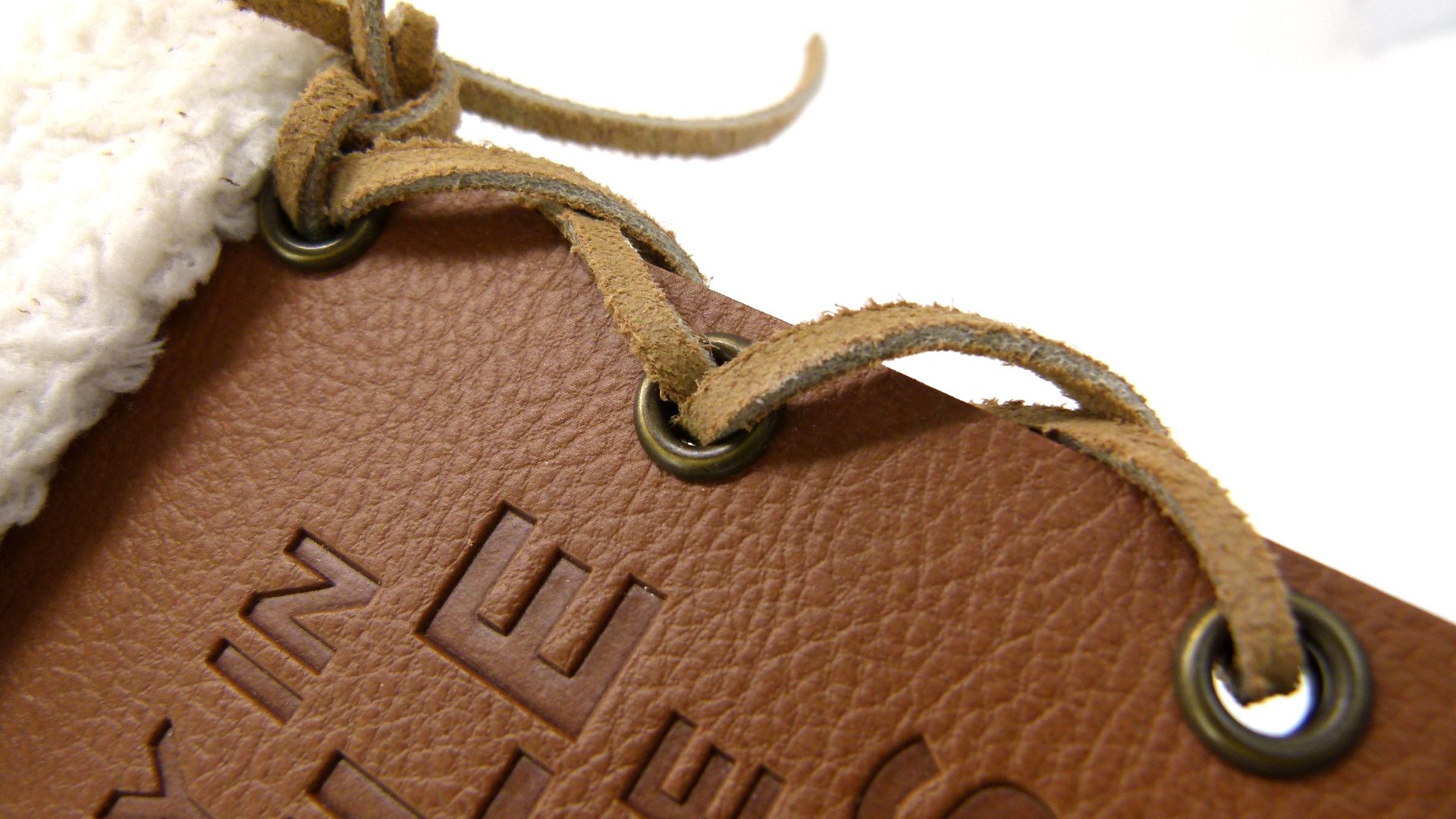 Not only is this an inspiring example of packaging, it also reminds us that binding isn’t always about holding things together – sometimes it simply adds a final bit of flair to an already exciting piece. To discover all of the powerful binding options available to you, don’t forget to download our free Binding Cheat Sheet.