When you want to lure your city’s most affluent residents to an event, the pressure’s on to make your invitation stand out from the rest of the day’s mail before it’s even been opened. One of the most effective ways of doing this: Have it arrive in an envelope that inspires curiosity the moment it’s seen…and felt. This was the strategy used by design studio Streetsense and printer Highresolution [projects  / website] for their invitation to the grand reopening of Washington DC’s upscale Chevy Chase Pavilion shopping mall in 2013.

After a $32 million renovation and the installation of several new stores and restaurants, Pavilion owners were keen to reintroduce the property to those who might’ve been put off by years of construction.

With several fashion-related shops featured there, the printer and design team honed in on the idea of a sleeve made from finger-pleasing fabric. (Incidentally, the same type Highresolution uses for banners, and most notably, the swatches in their Flexjet-ISAIA fashion show invitations.) 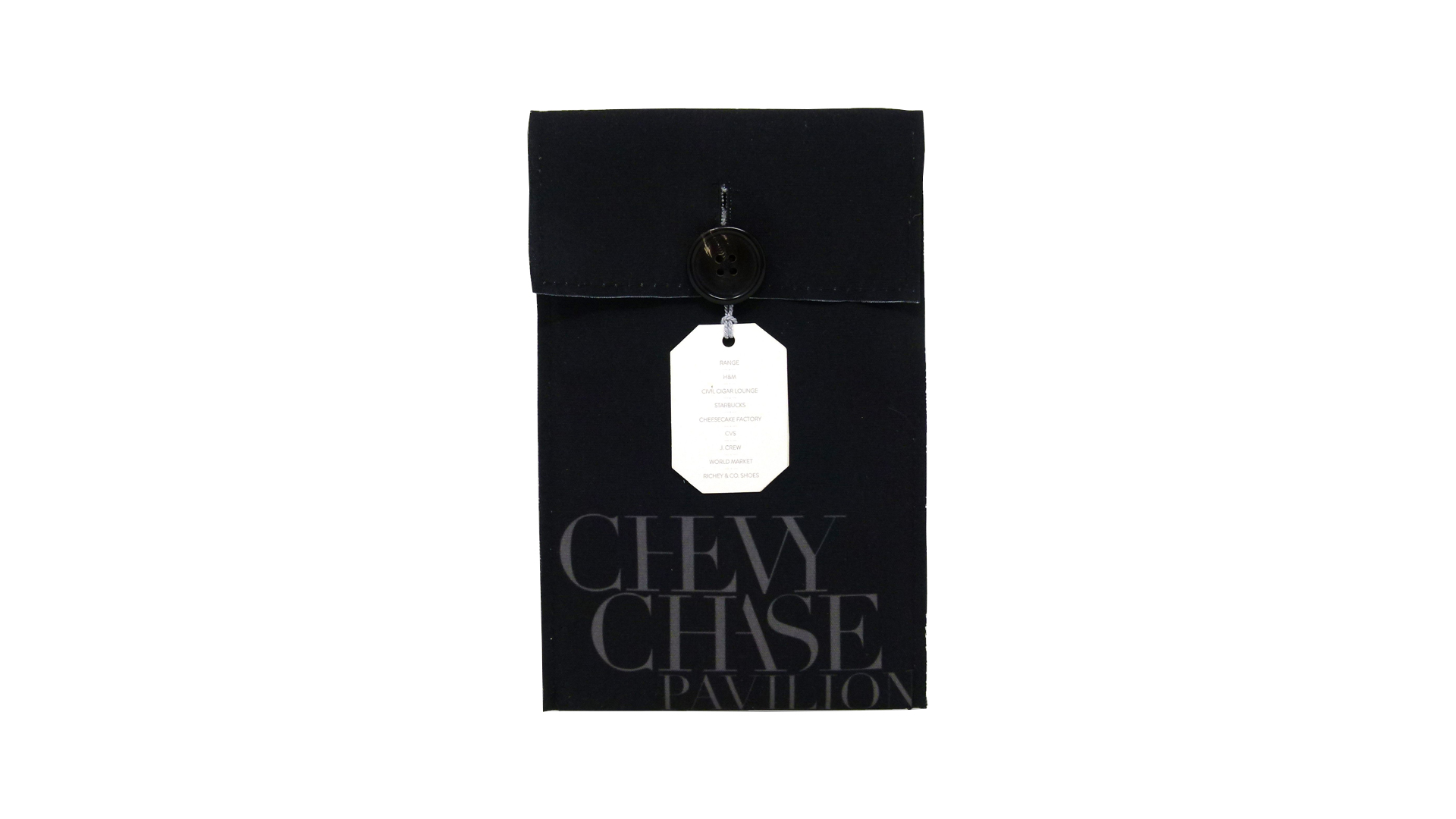 Using dye sublimation printing, Highresolution added the “Chevy Chase Pavilion” name to the White fabric, which was then cut to the desired size, sewn, and fitted with a large button to act as the flap’s closure. (Yep, all of that Black was printed!) Dangling from this: a die-cut, digitally printed set of hangtags boasting a simplified map of the mall’s location, as well as highlighting some of the well known brands within. 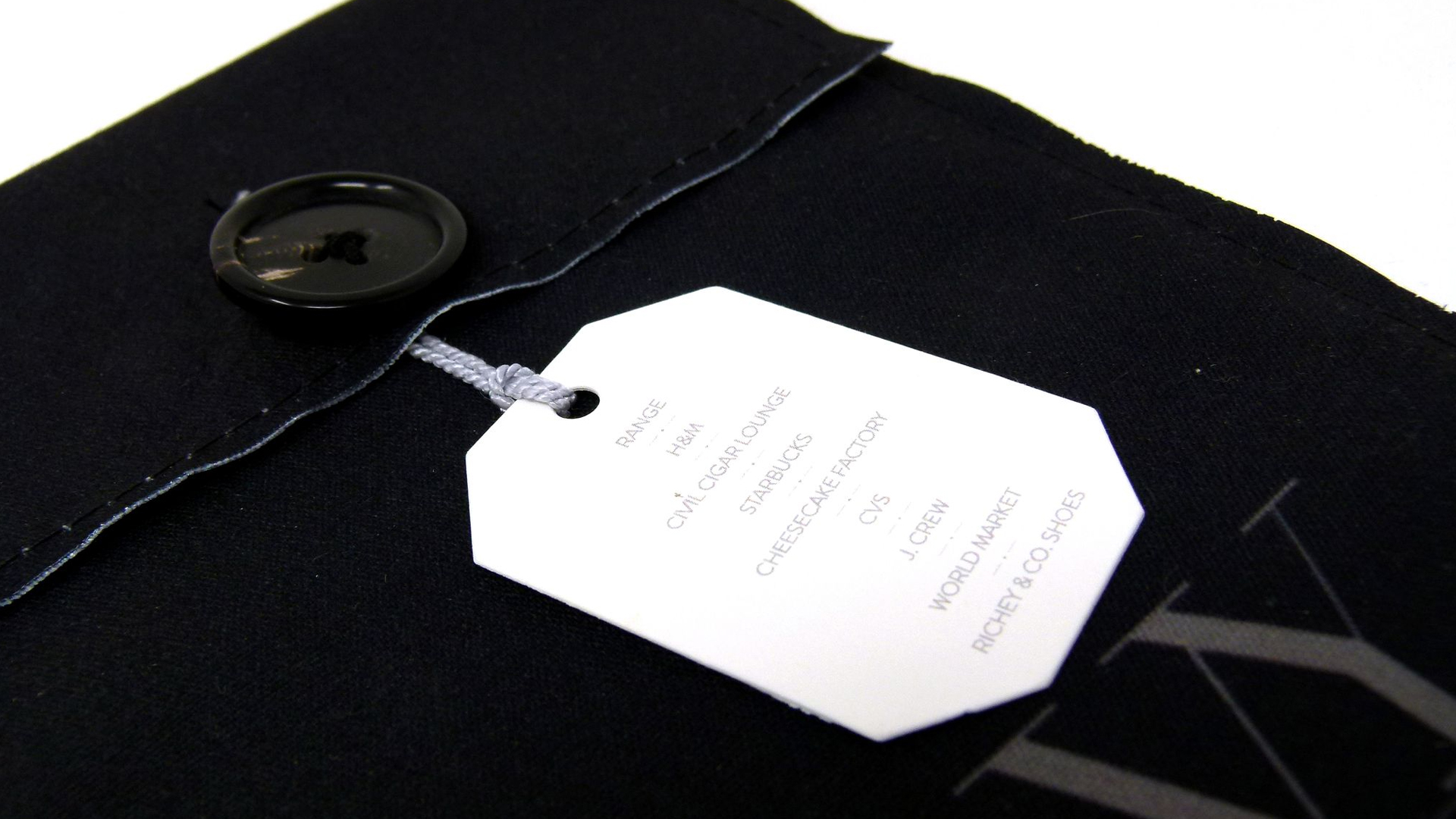 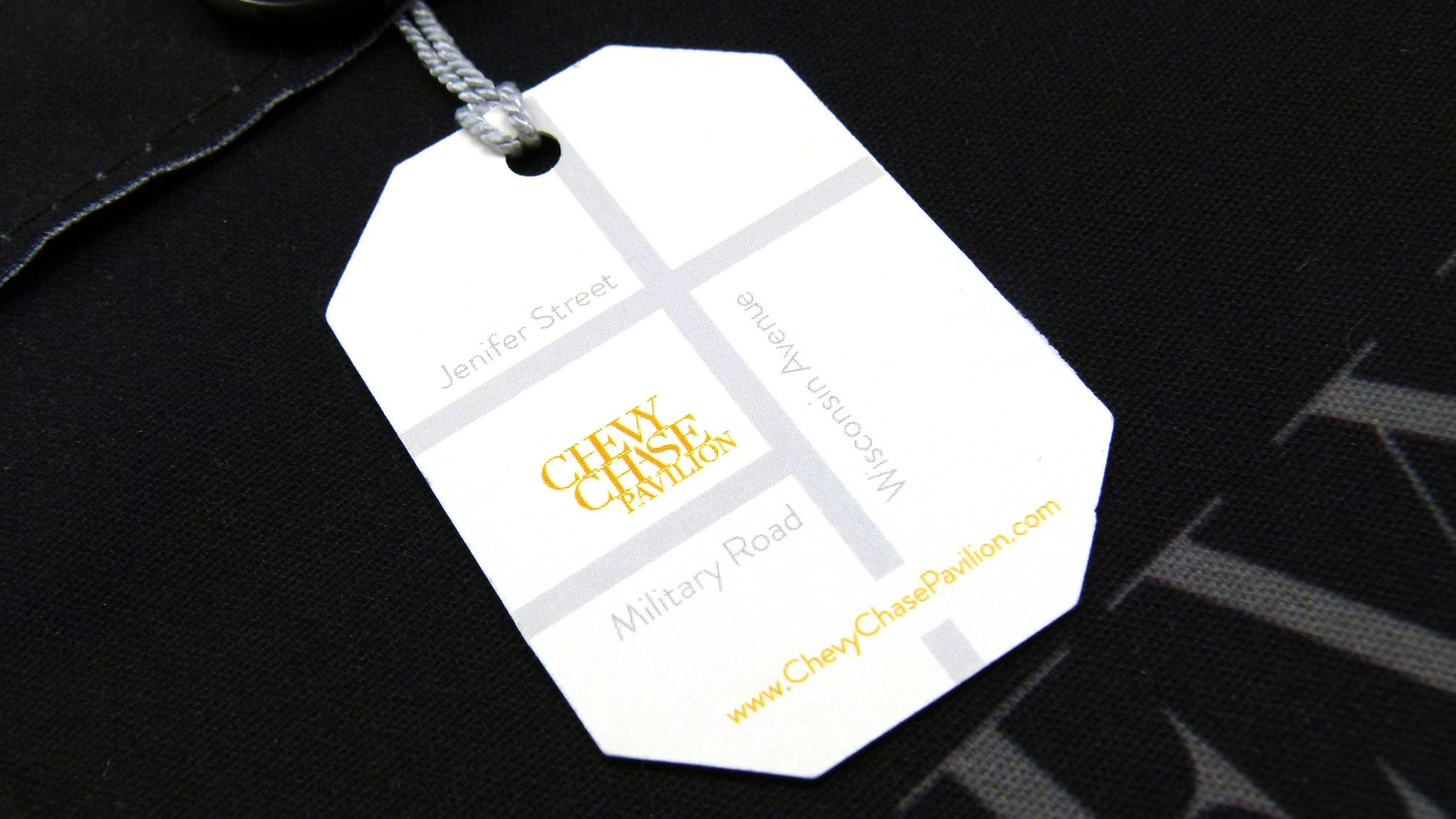 Opening the fabric sleeve reveals that the invitation actually consists of two pieces held snuggly together by a vibrant Yellow bellyband that features the embossed words “Thrill of the Chase.” The phrase is echoed again on the translucent cover – this time printed in digital White ink using an HP indigo 7600 – while the image it boasts is printed CMYK. Lifting this transparent sheet at last reveals the invitation itself. 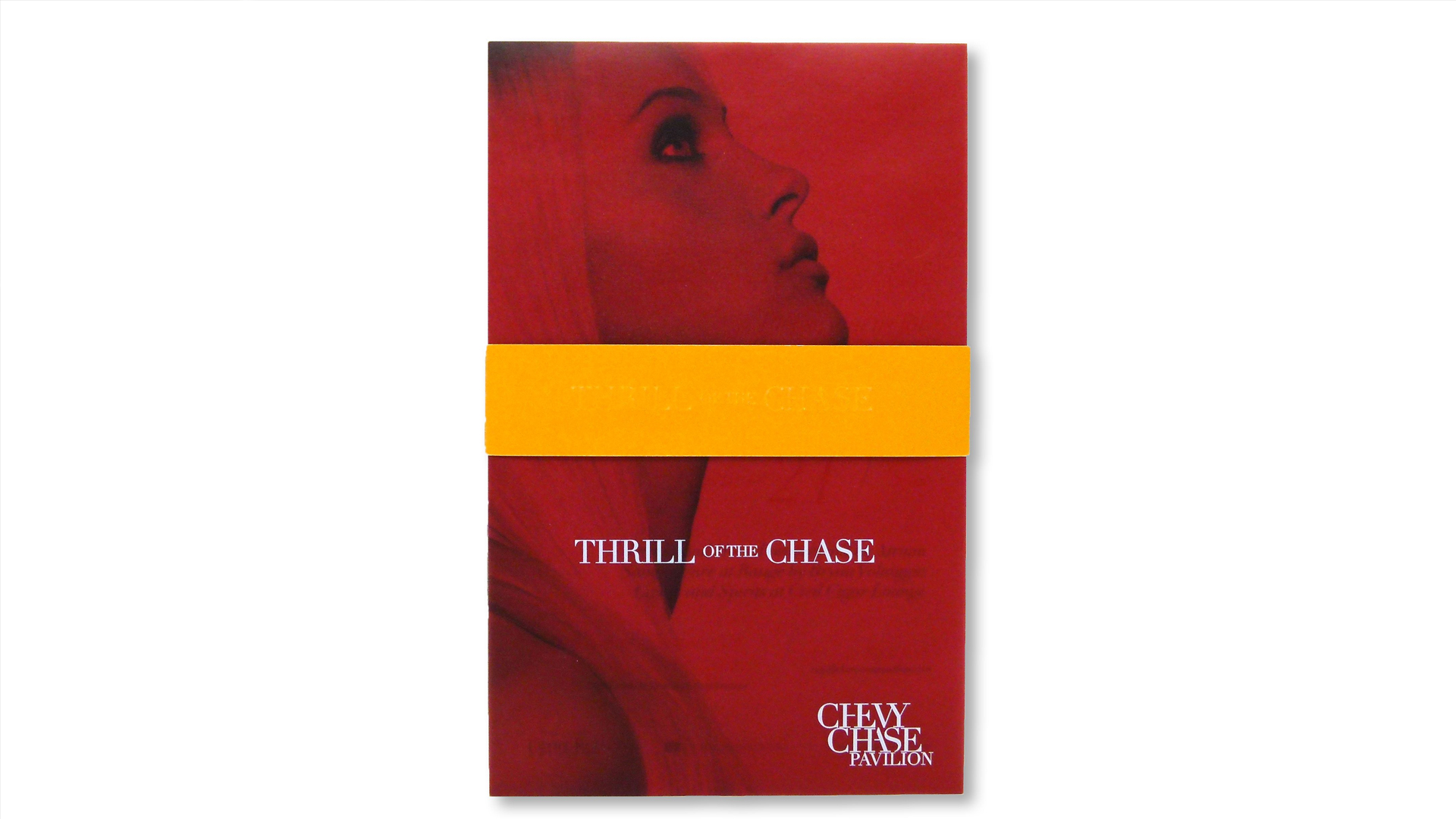 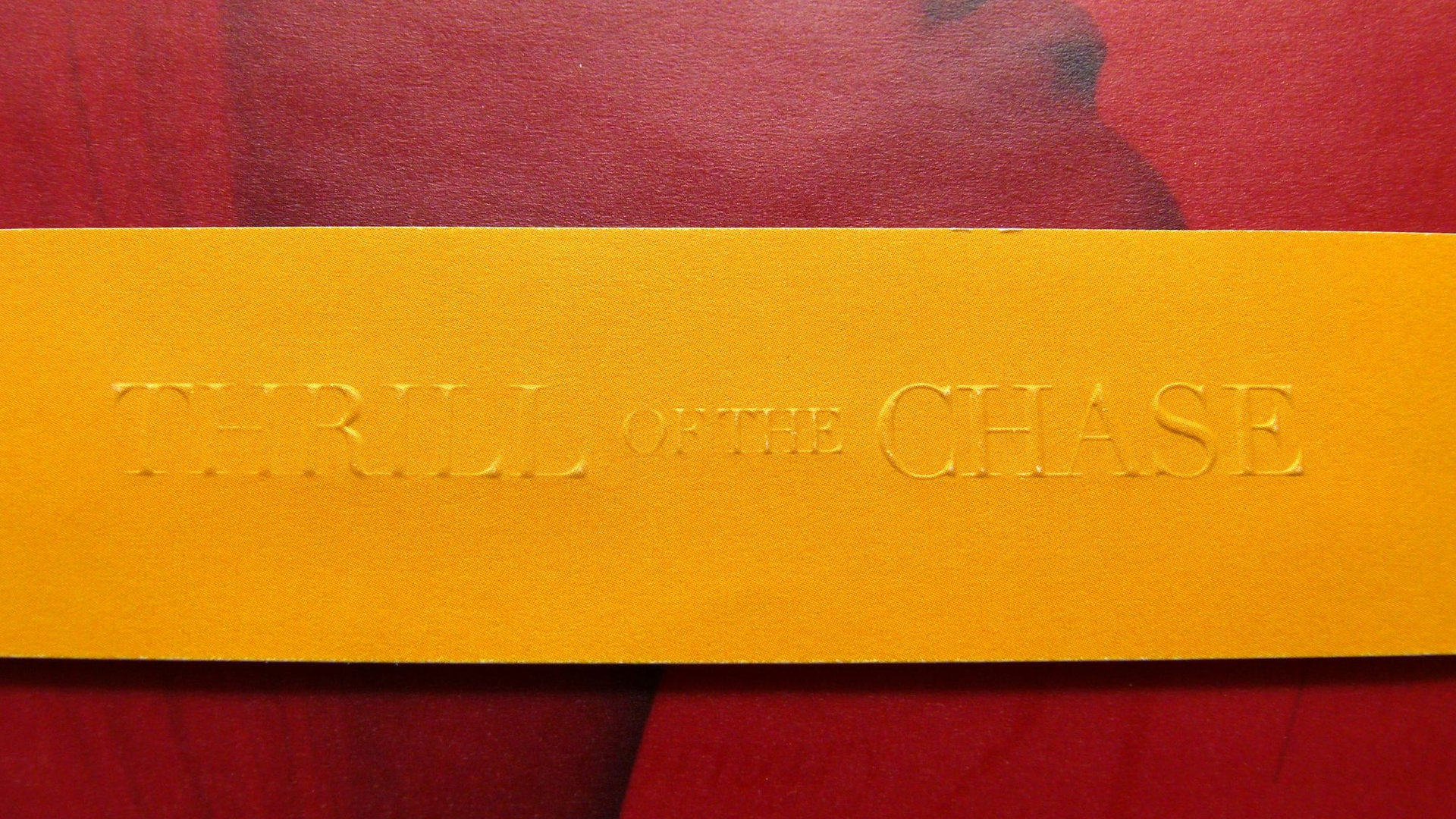 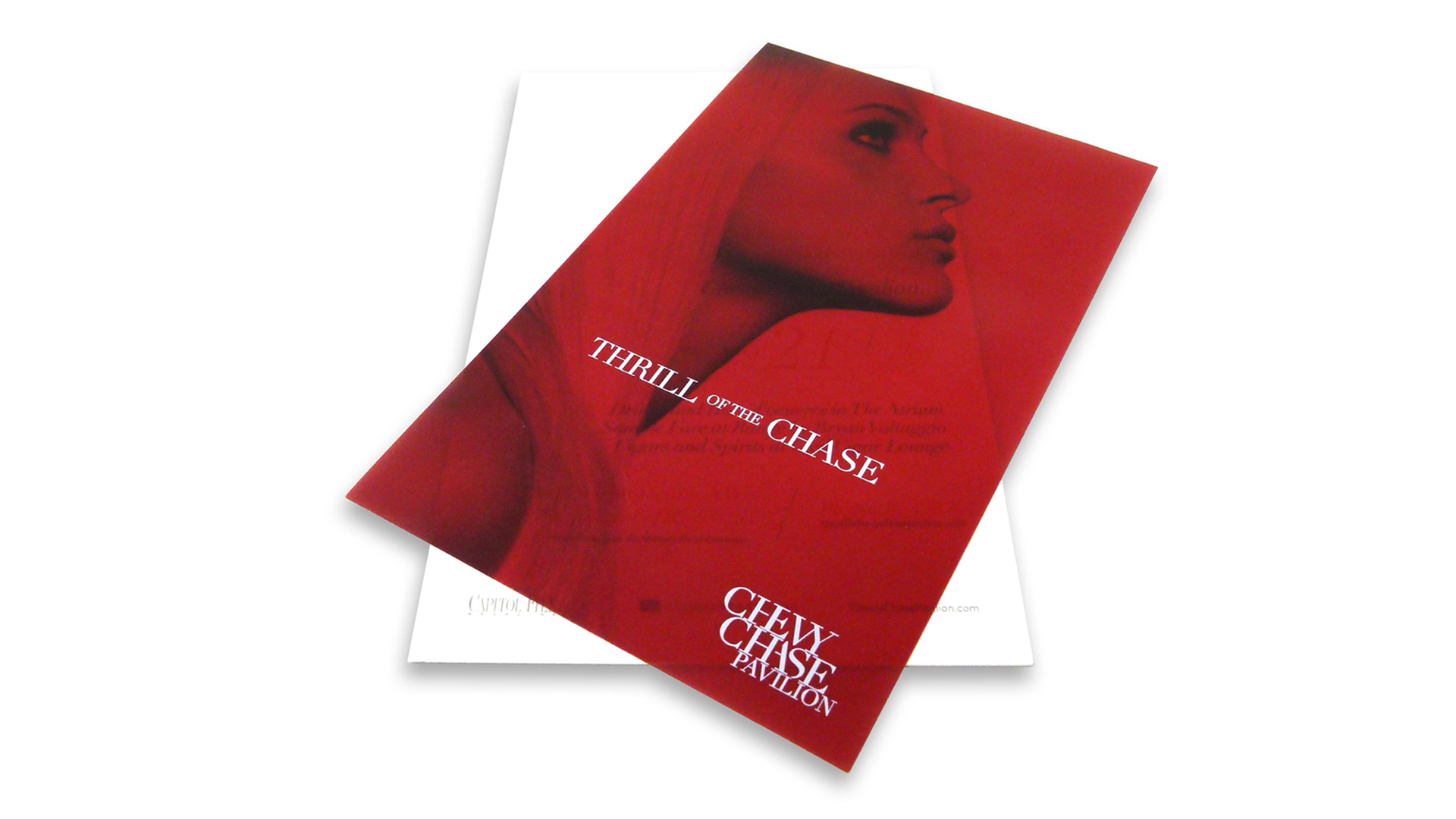 A satisfyingly chunky piece, the invitation is actually comprised of two different sheets duplex laminated together. The top is 120 lb. Mohawk Superfine Cover [Get Swatchbook] with all the relevant details for the event digitally printed CMYK on the surface. The back is 100 lb. Neenah Classic Crest Epic Black Cover [Get Swatchbook] and features a subtle-but-snazzy combination of multi-level embossing and clear foil stamping, giving the Chevy Chase Pavilion logo a prism-like effect. 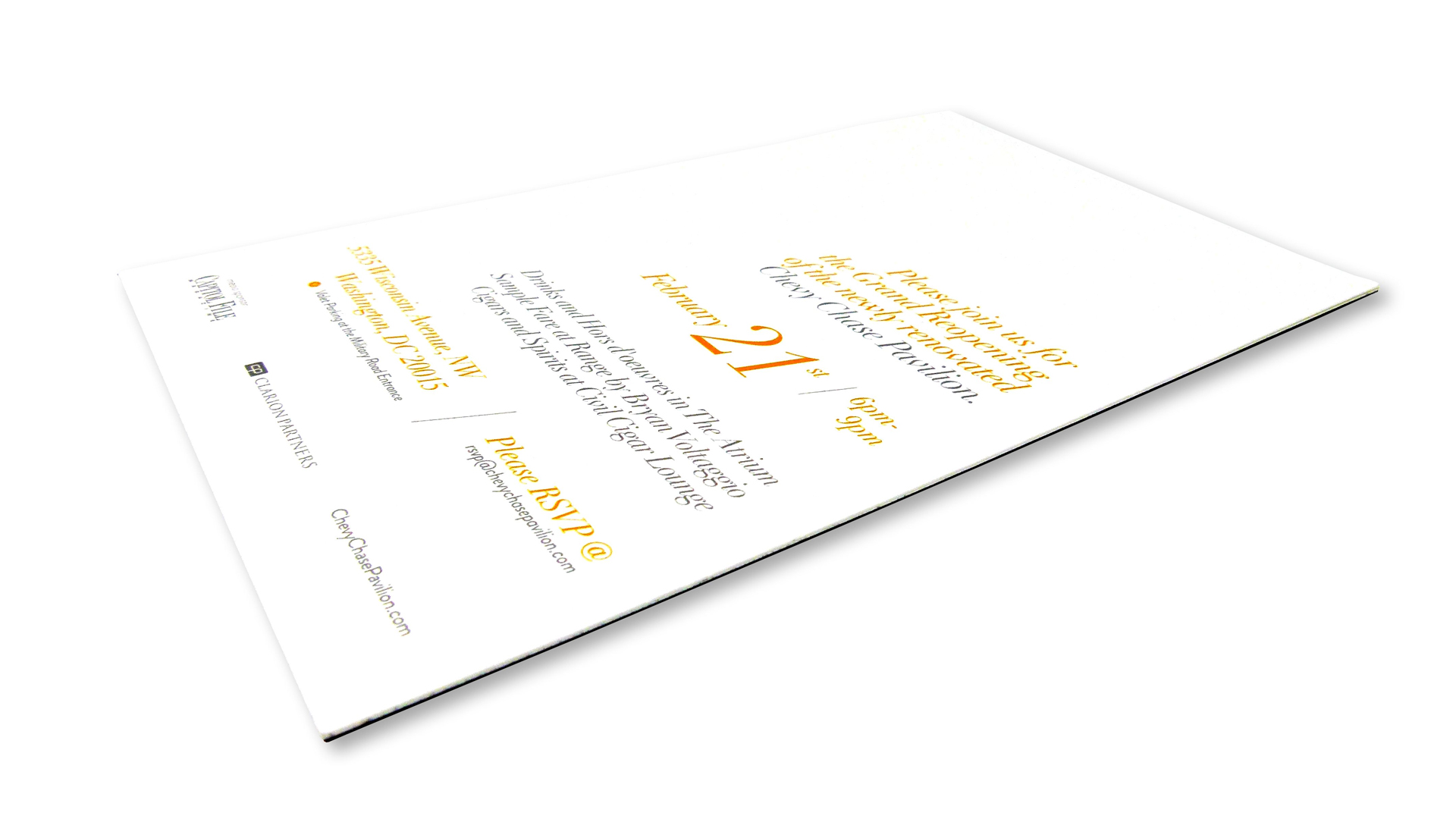 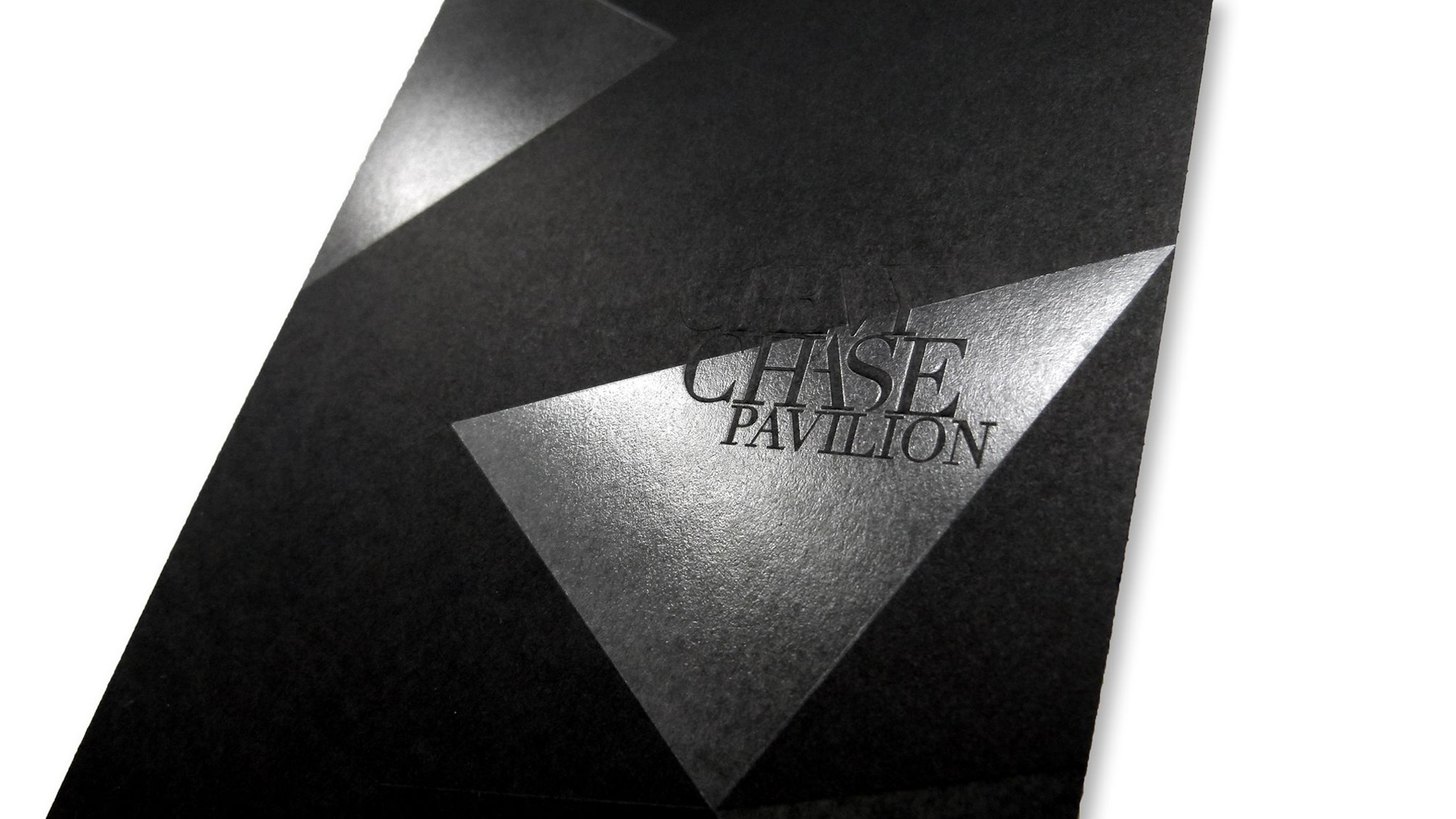 With the invitation suite tucked safely inside the fabric sleeve, Highresolution enclosed that inside a translucent envelope, affixed a 2-inch, embossed circular label to the outside for a dash of color, and voila: an unforgettable invitation that no self-respecting fashionista could resist! 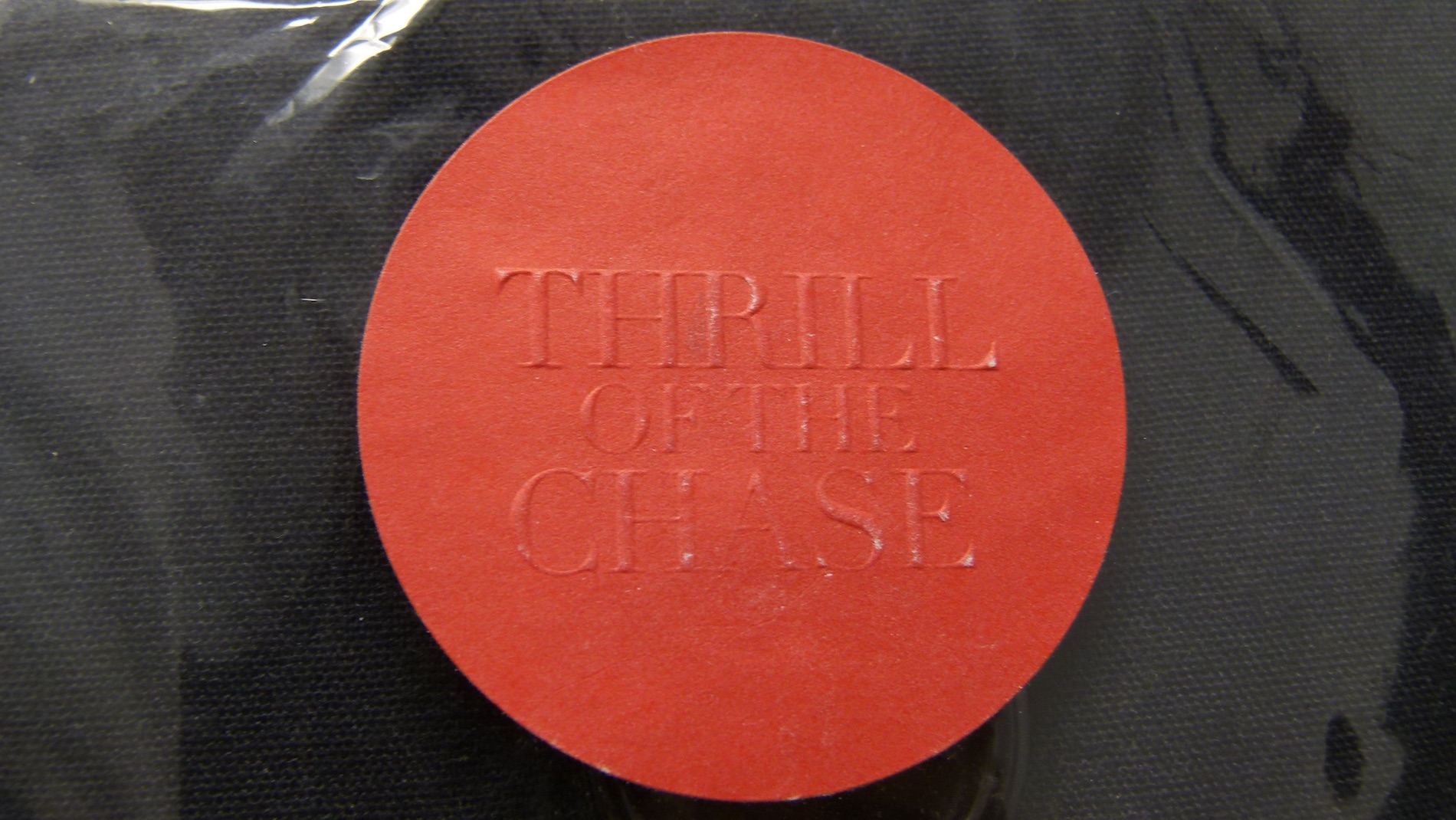 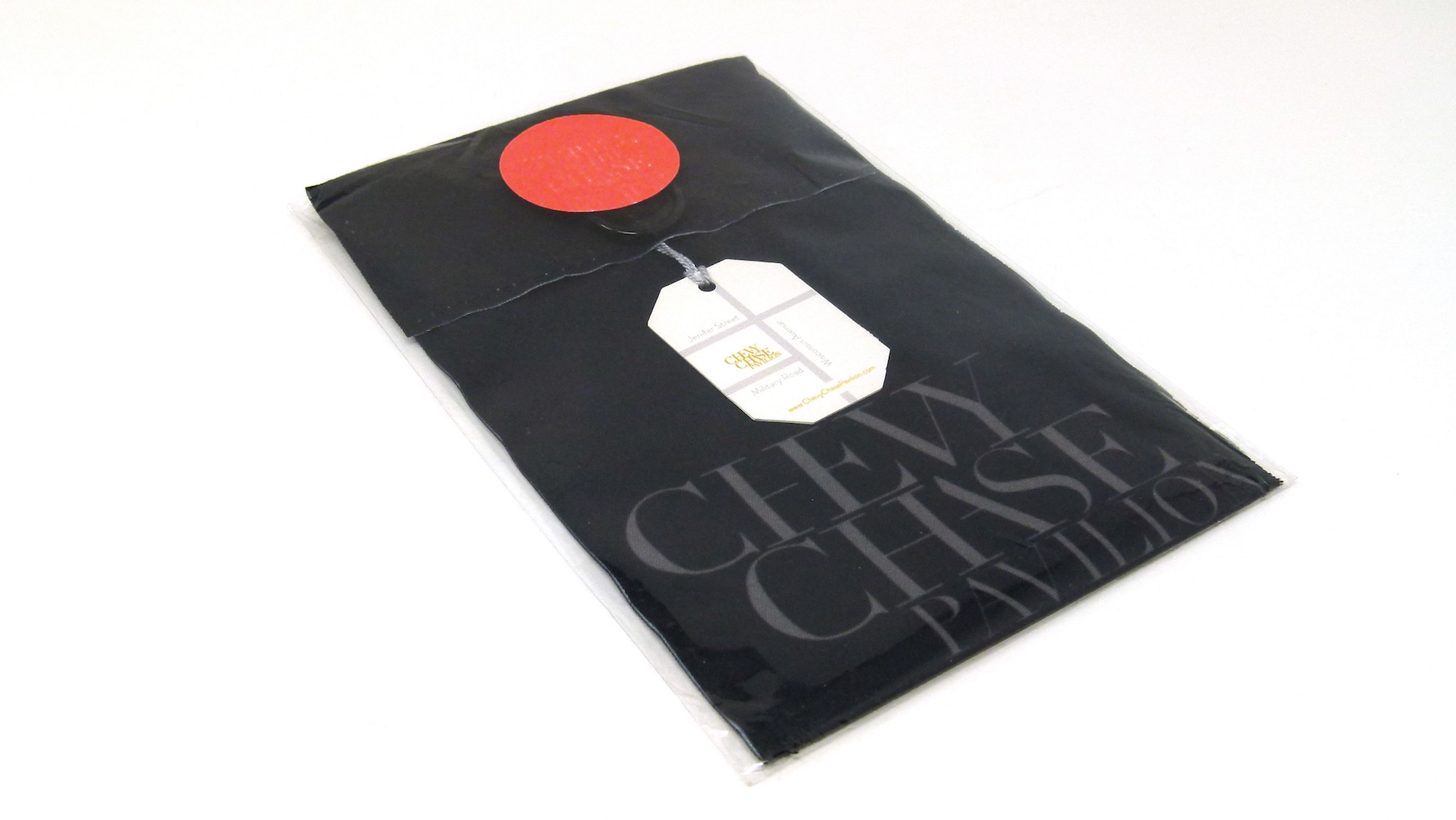