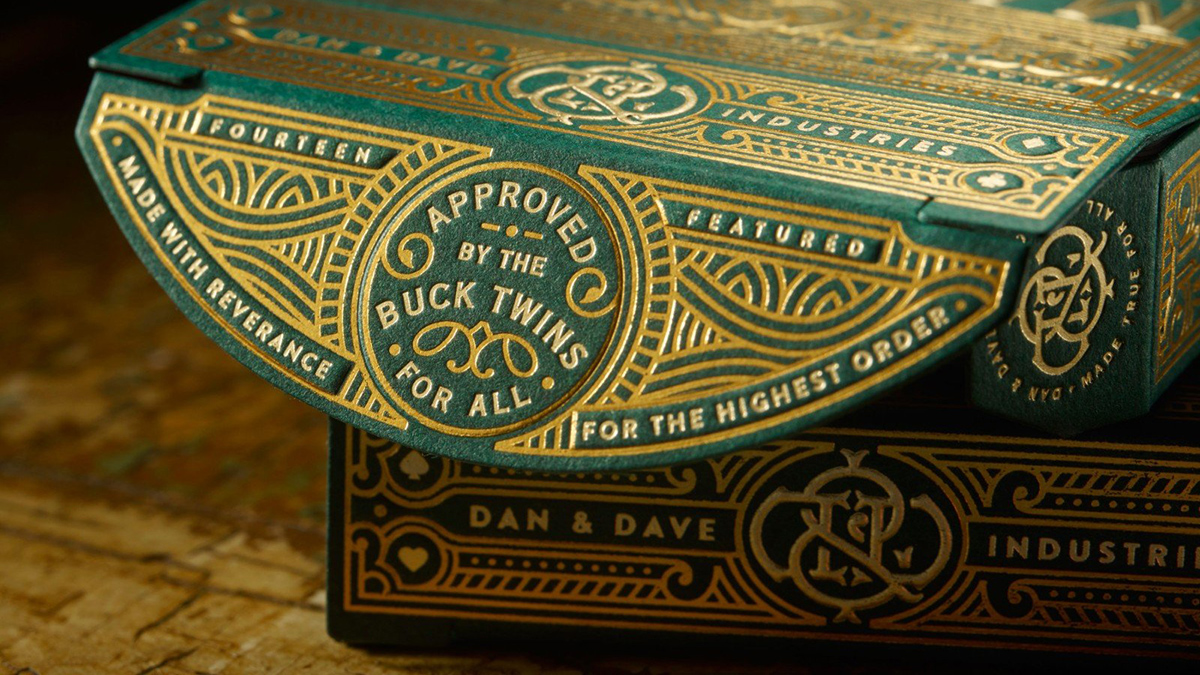 Here’s a new word for you: “anemoia.” It means feeling nostalgic for a time you yourself have never experienced. That’s the feeling I experienced upon first seeing the new Makers playing card decks from card boutique Dan & Dave, exquisitely designed by that master of foil fantasy, Chad Michael Studio. I say that because they make me pine longingly for those English gentlemen’s clubs of the PG Wodehouse era when everything was all green leather and crystal decanters (despite the fact that they would never have allowed me within a limousine’s length of the front door; wrong gender/bank balance, don’t ya know).

Well aware of Dan & Dave’s reputation for high-end playing cards, Chad approached them with a list of names. “After they selected [Makers] the concept unfolded as I was exploring the design,” he explains; a quest, incidentally, that took more than two years to complete.

Makers is comprised of “14 custom illustrated court-cards representing the foundational ‘makers’ civilization has been built on,” according to the website. “To us, these individuals are the pillars of unparalleled craftsmanship: something that we hold in the highest regard.” These include the Wanderer and the Prophet among others. “All 52 cards are custom illustrated,” Chad emphasizes, “and the face cards are printed in a metallic gold ink.”

The limited collector’s box set ($98) includes two decks that arrive in a solid-wood display box that can be locked with an antique-style key. The key itself comes in a small and sturdy green envelope made of Colorplan Forest Green 91 lb. Text paper, [Get Swatchbook] boasting a fabulously detailed blind emboss.

Upon opening the wood box you find your twin decks nestled in a green leather that matches the lining of the lid. Critically, the cards’ tuck boxes also match that leather almost perfectly as they are printed on Mohawk Carnival Vellum Forest Green 100 lb. Cover. [Get Swatchbook]

These tuck boxes are so well designed, it might take you a moment or two to realize that no ink was actually used in their making, only two matte gold foils. If Chad has a calling card, it is a unique talent for pursuing a watchmaker’s degree of intricacy in his foil designs without ever tipping over into the realms of gaudiness, something demonstrated particularly well on the back of these boxes.

Naturally, praise must also be given to Clove St. Press which brought these designs to such vivid life. (Compare these boxes to those Clove produced for the Sons of Liberty playing cards.)

Finally, says Chad, “The inside of the box has a metallic gold printed pattern which is a little secret we are letting [people] figure out.”

Foil stamp me intrigued! Now where is that crystal decanter…? 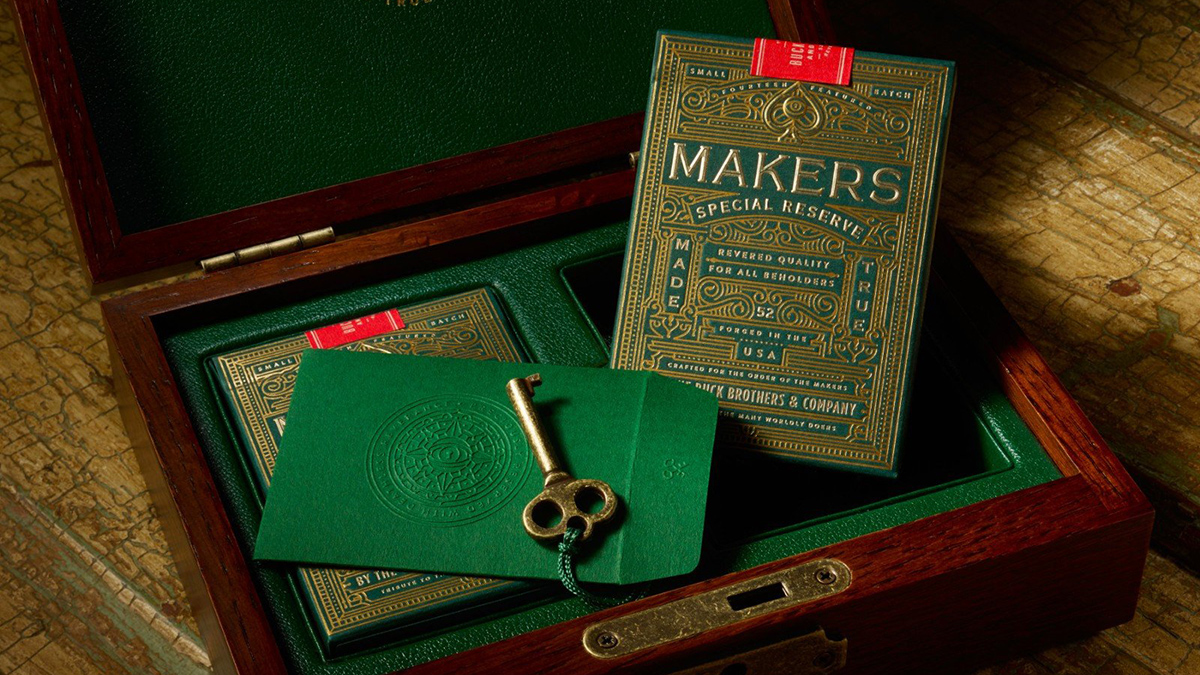 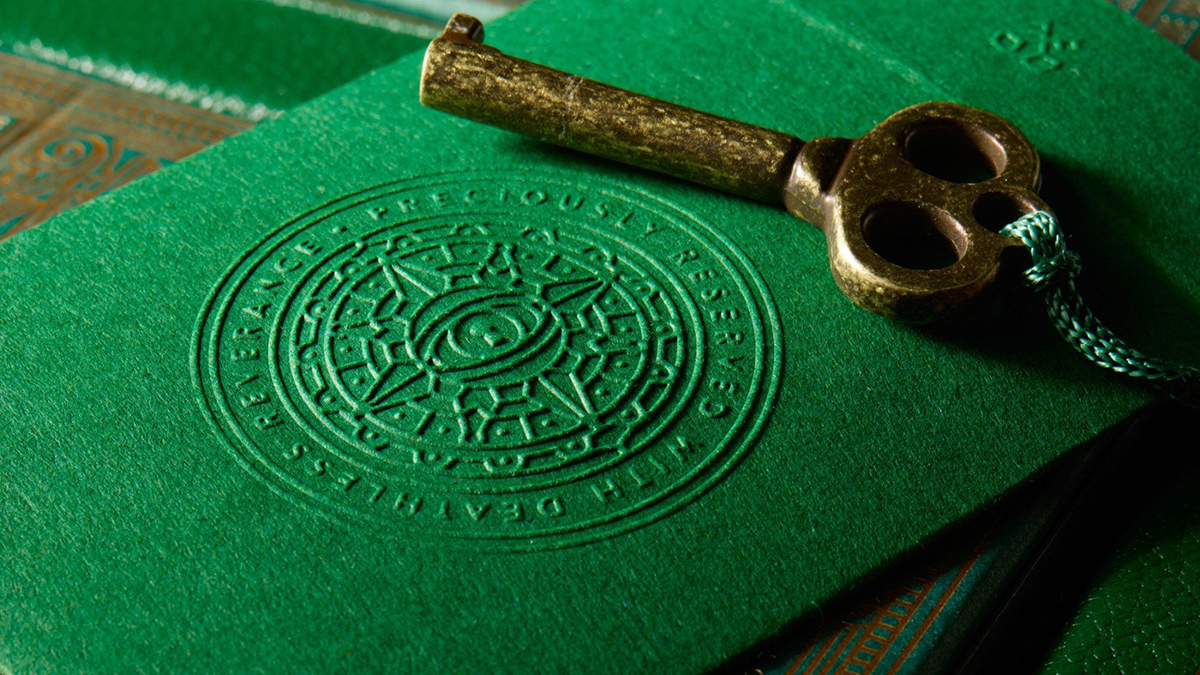 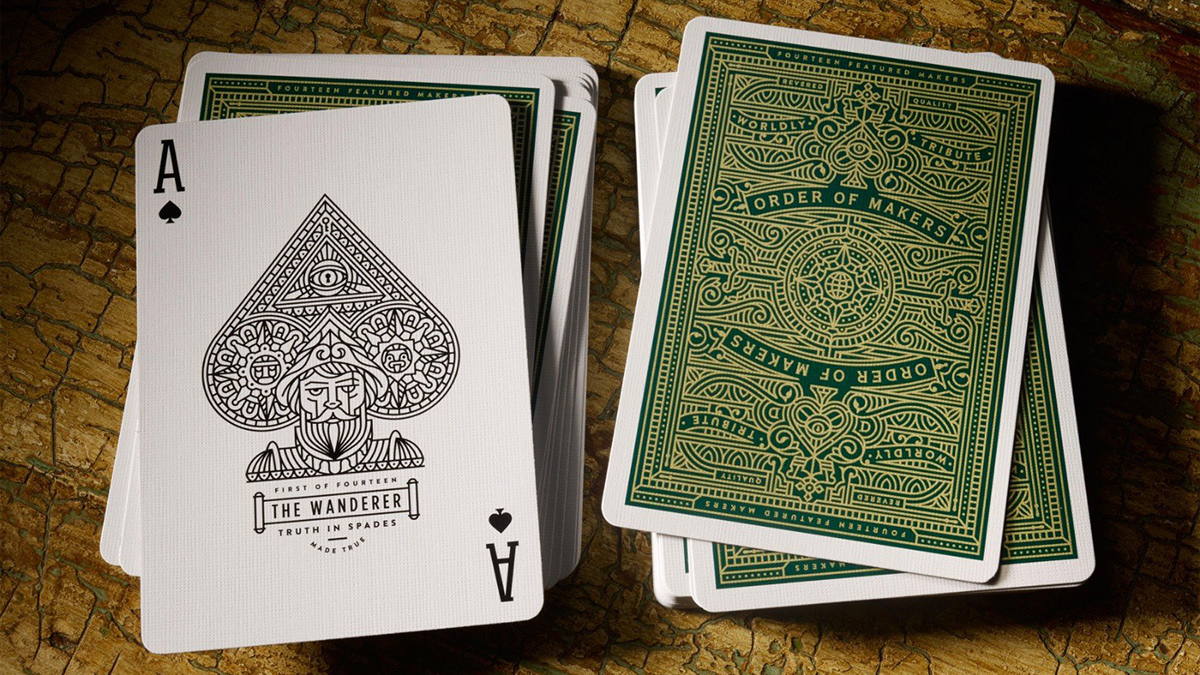 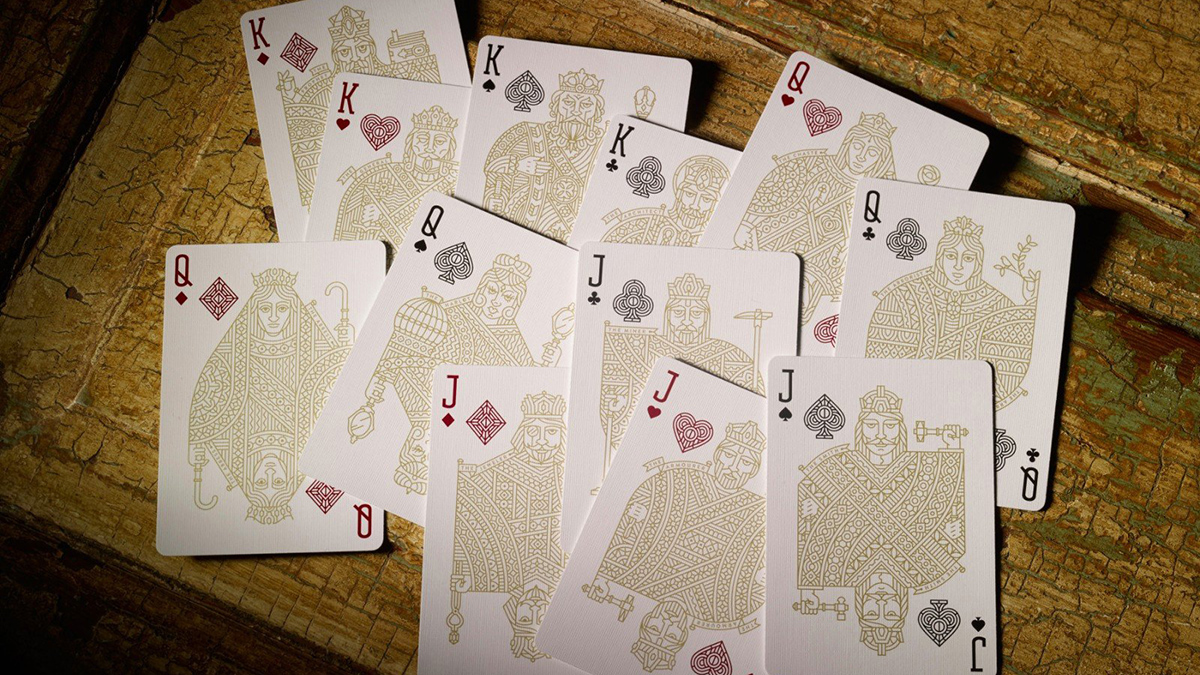 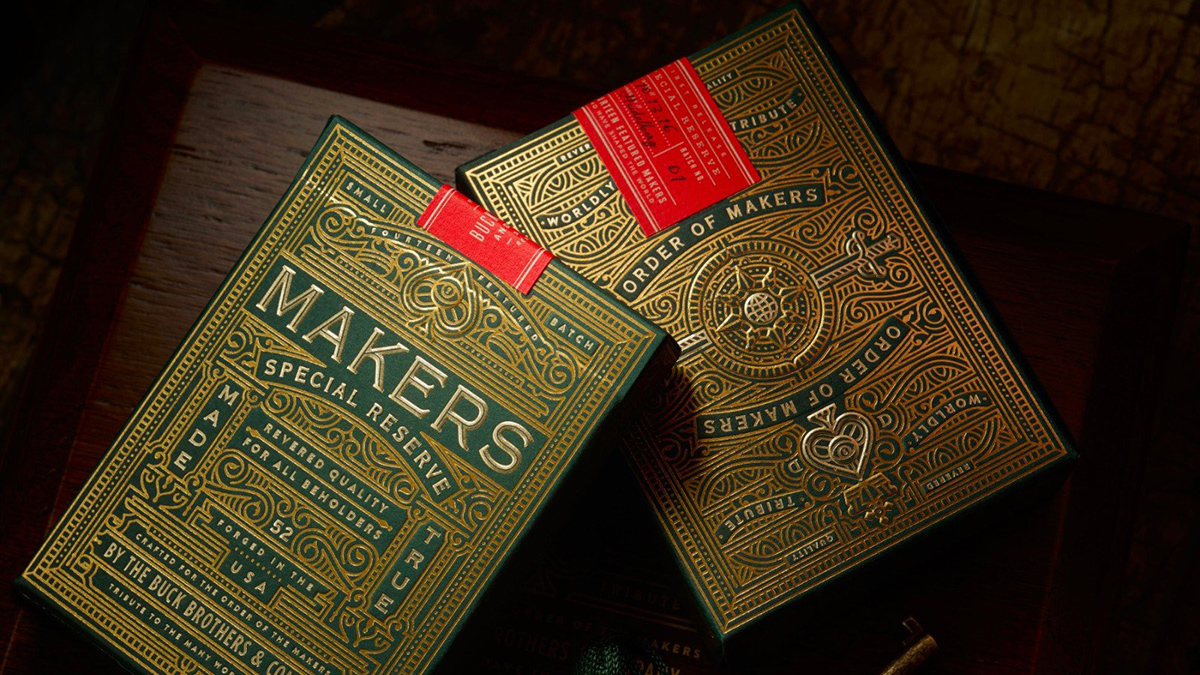 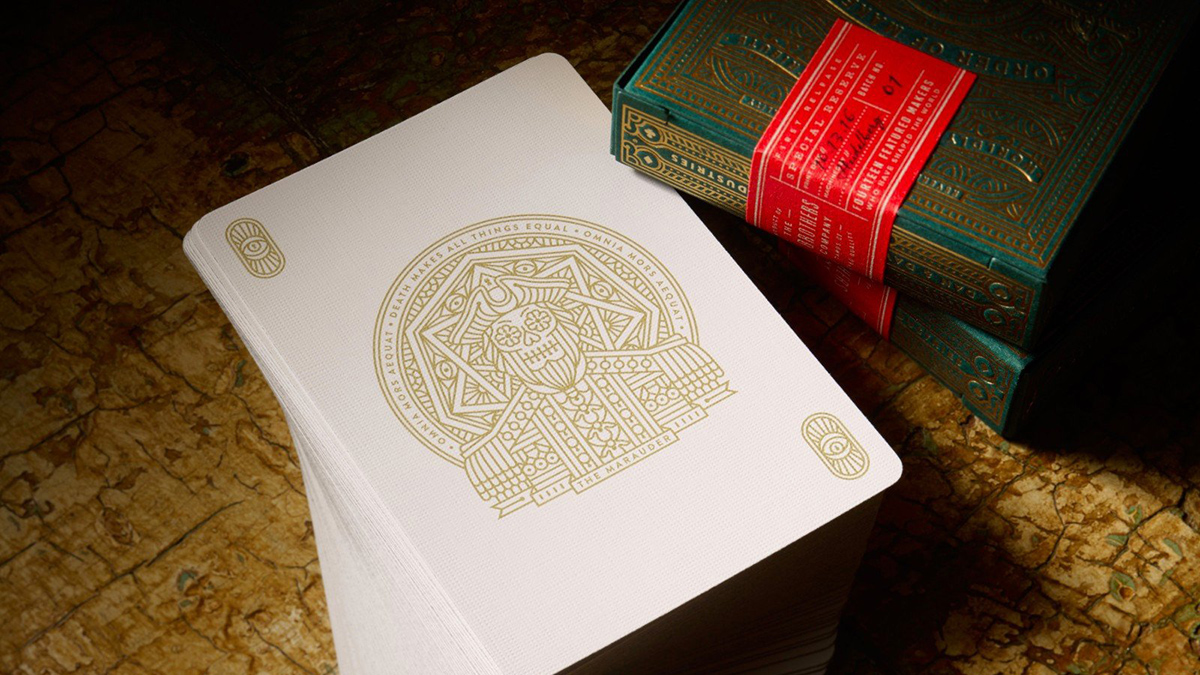