USPS Jazzes It Up in More Ways Than One

This is the first time the United States and France have jointly issued a stamp since 1989, when both countries honored the bicentennial of the French Revolution.

Designed by Greg Breeding, the stamps depict the artists in their most iconic poses using a photo of Davis with his trumpet in 1970 by David Gahr and a photo of Piaf from the Michael Ochs Archives.

The Miles Davis and Edith Piaf stamps also feature another historic first. For the first time, a QR code is printed on the back of the stamps.

The code can be scanned with a smart phone. A landing page opens with an option to listen to music from Davis while viewing photographs and a timeline of the lives of both Davis and Piaf.

There are several buttons on the landing site including a Buy Now button that enables purchasing the U.S. and French versions of the Davis and Piaf stamps as well as other related products. The landing site can be emailed, shared on Facebook and Twitter and videos may be added.

If you’re in the Los Angeles area today (June 27, 2012), a Miles Davis stamp dedication is scheduled at the Hollywood Bowl’s Museum Terrace from 7:00 p.m. – 8:00 p.m. The event is free and open to the public. The dedication will be followed by the Herbie Hancock hosted “Miles Davis Celebration” concert featuring Marcus Miller “Tutu Revisited,” the Miles Electric Band (featuring Vince Wilburn, Jr. on drums) and Kind of Blue: Jimmy Cobb’s “So What” Band. For ticket information, please visit www.hollywoodbowl.com. 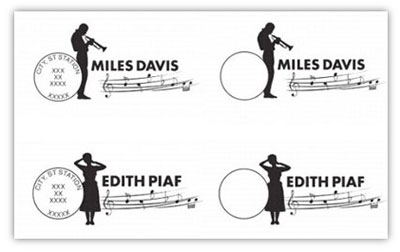