Like many professionals, designers occasionally disappear into a rabbit hole of their own pressure-cooker deadlines and half-baked design prejudices. In this volume, Ward takes us by the hand and gently reminds us that design requires education, elbow grease, and the ability to not take yourself too seriously. (He also puts up an admirable defense of Comic Sans…)

Graphic Design is a Proper Job
While you may protest otherwise to family members and those not in the industry, it’s a harsh pill to swallow. But we should get this out of the way early on so as to better establish our stage.

Here’s the thing about jobs as the vast majority of working people understand them. Monday morning rolls around. You get up, you go to your place of work and complete tasks for a set amount of hours— usually in the region of eight hours a day / forty hours a week—and on Friday afternoons you go home and forget all about it. In exchange, you are given a pre-negotiated salary paid in regular (usually monthly or similar) increments. If at any point you are required to work late, it’s usually a given that you will be awarded more money as recompense in the form of overtime—usually to the tune of 1.5 to 2 times your usual hourly rate. It’s a system that has worked very well for a lot of people for a long time. Roughly 99% of the population since the industrial revolution. 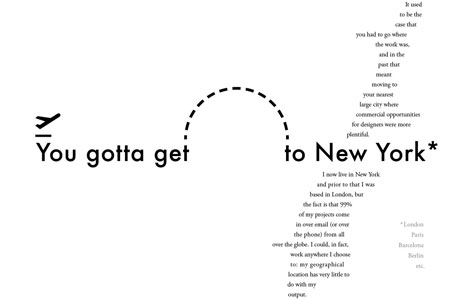 And the very second you sign the page that comes with your shiny new contract saying how you ‘waive the right to overtime’ and are happy to ‘work whatever hours are required of you in order to complete a project,’ that scratch of pen on paper is the sound of you admitting that you don’t have a proper job. If you go freelance, it gets even worse as you’re not even guaranteed to get paid at all; but that’s another story.

It’s not a situation one can nurture for long and ultimately is something that, as you grow older, will becomes less and less appealing—that is, if you don’t burn out first. Design is a young person’s industry, by and large. That’s not to say it favours the young as such, or that younger people are any better equipped to complete the tasks required of them; it’s simply an industry that is happy to mine their enthusiasm and energy. And with some 10,0001 students a year (in the UK alone) leaving colleges and universities with qualifications in design, it’s not exactly a natural resource that is in short supply either. As for the older practitioners, they tend to remove themselves from this equation or move into more managerial roles that don’t require this same commitment of hours or constant creative input and screen time.

Graphic Design is not a proper job. Being a front-line, down in the trenches designer is a lifestyle choice, and one that you can probably hang onto for about twenty years at most. So make the most of it.

Editor’s Note: Disagree with that 20 year estimate? Take our poll and tell us how long you think designers can hack it in this business?

1 The exact number of graduates in Graphic Design is unclear but 176,700 students graduated from Creative Arts and Design based courses in 2011. Source hesa.ac.uk

The Rules are There to be Broken
This loaded and over-used phrase both insinuates and assumes a lot of things; one being that design requires rules to be successful.

There are a large number of practitioners who see design as being more successful and expressive when it is loose and when rules are not adhered to. For my part (this is a book of opinions), I see it as more of a half truth, as opposed to an outright lie. Once you know what the rules are in the first place (see ‘An Education in Design is Pointless’, page 26) and you have a very good cause for breaking them, then and only then, should you consider doing something outside of ‘the law’.

A disregard for accepted practices and theory can provide a very exciting, even thrilling, piece of communication, but equally, being some kind of design enfant terrible just for the sake of it, can often lead to a disjointed, awkward and ultimately unsatisfying portfolio or piece of work. A magazine where every page is different with no continuity in its layout may have been cutting edge once upon a time but now, with hindsight, you realise that it’s just difficult/annoying to read or even illegible.

A better tactic is to be smart about it and come at things from a different angle—exploit the rules that are there. How can you make them best benefit your project? The rules of design are surprisingly forgiving. By learning them, as you evolve as a designer, a lot of minor decisions will already be subconsciously made for you. It’ll still be your head making the decision but you instinctively know, for example, that you shouldn’t set more than thirteen words on one line of text and you’ll know why placing elements in certain places looks better than in others. As this happens, you’ll find making decisions about which rules to follow comes much more easily, and the times that you find you do need to go off-piste, you’ll no doubt have a very good reason to do so.

There’s no Budget, but it’s a Great Opportunity
And that would be an opportunity for what exactly?

If you go your entire career without receiving this kind of a proposition, you’re doing either extremely well or extremely badly depending on your mind set. The idea that it’s OK for you to spend days of your time creating work for world renowned clients who aren’t paying you a decent wage is pretty shameful— yet often unavoidable. Unless you set your stall out very early on and stick to your guns.

As a designer, you want that client’s brand in your portfolio and, of course, they know this.

The exception to this rule should probably be charity work, (though manage your expectations, see ‘Charity clients will let you do as you please’, page 62) but my personal rule is to only accept direct approaches from charities themselves—as opposed to an award-hungry creative agency. Rest assured the Art Director commissioning you will not be giving up his/her wage to work on the project and nor should you be expected to in that case. Ten years in, I’m more confident in telling people where to go. In fact something I like to do is to ask the person emailing/calling me “Are you getting paid to ask me?” That’s always a fun one.

Continually accepting these kinds of ‘opportunity briefs’ will ultimately cheapen your own perception of your work and that filters through to the work itself. You can often tell when a portfolio is full of ‘opportunities’, particularly when you’ve been working in industry for a while.

Craig Ward is a British Designer and Art Director currently based in New York. Over the course of his career he has been lucky enough to work with some of the highest profile clients across the fashion, music, advertising and editorial fields. A contributor to several industry journals, former Art Directors’ Club Young Gun (2008), recipient of the Type Director’s Club ‘Certificate of Typographic Excellence’ (2009) and TEDx speaker (2012), his work has been shown, awarded and documented globally in countless books, magazines and exhibitions.