The (Very) Young Guns of Design

Apparently will-work-for-fonts designers aren’t our only competition anymore. Recently, the public sector has turned to another source for the creation of official logos and material – school children.

Last month, three Linganore High School seniors in Frederick, Md. designed the logo for the Cyber Task Force, a new section of the FBI’s Baltimore bureau (see bottom of page). The computer graphics teacher at the school and someone at the bureau hatched the idea of having her students compete to create the logo. The winning team – Helen Snell, Alex McCaslin and Kate Russo – used Adobe Illustrator to come up with a colorful identity boasting an eagle, the Baltimore and Delaware state flags, and binary code to represent the computer offences the new task force will be investigating. The logo will be featured on uniforms, letterhead, and other materials related to the group.

The month before, Arlington, Va. – another Washington DC suburb – announced the winner of a county-wide competition open to high school students. The challenge: Design the municipality’s 2013-2014 car windshield tax sticker. This year’s theme was the USS Arlington, a battleship set to be commissioned soon, named to honor those who died at the Pentagon during 9/11. The winning sticker (top of this page) was designed by Washington-Lee High School junior Ben Jenks, and will appear on 155,000 windshields.

In neither case was a cash reward mentioned. Presumably the public exposure was deemed reward enough – an attitude these young people should get used to in today’s bid-for-work marketplace. 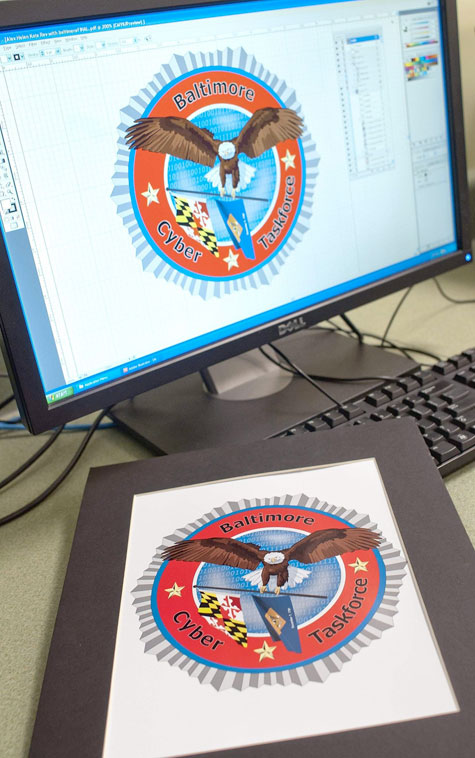