Over the last year or so, various companies have tried to make print products interact with tablet computers, smartphones and the Web. While they’ve all displayed a certain amount of technological sophistication, they haven’t really managed to create a meaningful link between paper and technology. (If you have to hold your iPad over a magazine ad to trigger a little animation, for example, why bother with the print ad?)

However, a recent experiment by OgilvyOne for Middle East insurance company RSA has sidestepped the latest cutting-edge innovations for the more tried-and-true SMS – the technology that allows you to send text messages – striking the perfect balance between design and results.

One hundred readers of CEO Middle East magazine in Dubai received an issue with a belly band covering ¾ of the cover promoting RSA’s competitive car insurance rates, featuring an illustration resembling a BlackBerry. Incorporated into the illustration was a simple digital screen and working buttons. Where most insurance ads might simply refer readers to their website – either by simply giving the URL or providing a QR code – this one actually allowed readers to receive an insurance quote, simply by typing in their license plate number. 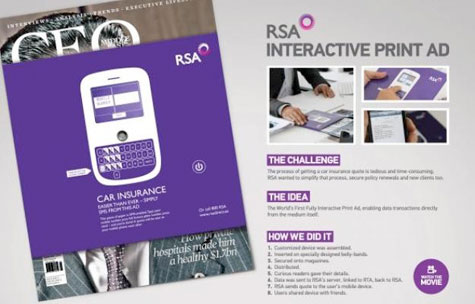 “In a collaboration with the Dubai Road and Transport Authority (RTA), we where able to get the details of the car via the number plate the readers submitted to us,” OgilvyOne’s regional creative director, Fabian Roser, tells PaperSpecs. “The device we custom built for this campaign. It is SMS-enabled, and contains a prepaid SIM card. Hence the initial details, keyed in from the readers of the magazine, are submitted to RSA via SMS. No Internet-connection needed!”

In a short period of time, the reader then received their insurance quote in a text message on their cell phone.

“We generated 171 responses from this exercise, which is 71% above target and means that 1.7 people used the execution per dispatch,” according to the follow-up report Roser and his team issued. “From this set of respondents we secured 63 insurance policies worth of new business and eight renewals. We believe that we also managed to cement RSA in the minds of everyone who utilized this execution as an innovator in a very homogenous playing field.”