It feels like we spent much of 2013 helping people better understand that 97% of the stories they read about 3D printing had nothing to do with paper (a distinction lost on 97% of LinkedIn discussions), while calling people’s attentions to the 3% of 3D-printed projects made of paper. And now along comes the limited edition of Chang-rae Lee’s On Such a Full Sea, which happily blows that distinction out of the water.

Launched Jan. 7th, 200 signed copies of the Riverhead Books novel – which go for $150 a pop – are each contained in a white slipcase featuring greatly raised and elongated projections of the book’s title wrought in 3D-printed plastic. 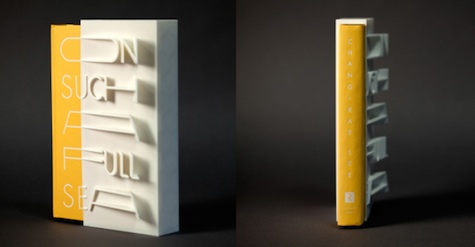 To even comment on the questionable practical and aesthetic qualities of the slipcase would feel inordinately churlish, especially considering the amount of time and thought that went into it. Consider the following from Time magazine’s coverage of the book:

“In the end, each individual slip cover took 15 hours to print. Some test prototypes took up to 30 hours. Yentus has been a book-cover designer for more than 10 years and is used to being able to sketch any flat design and immediately see the idea on paper, but she had to learn from scratch what the printer technology was capable of doing.”

While the Time piece rightly emphasizes the potential of 3D-printed doodads to help publishers make a few bucks by pushing the “book as art object” angle, 3D printing could also be a boon to designers who are all but burnt out on 24/7 traditional 2D design. Planning out something like this will definitely get you using mental muscles you never knew you had – the designer of this slipcase dipped into AutoCAD!