QR codes are like that weird little kid your parents were always trying to get you to play with because he looked funny, had no friends, and couldn’t even come up with a cool-toy dowry to spark your interest. (We’re not being cruel – we were that kid.) And like that weird little kid, the only value QR seems to provide is in the unintentionally humorous ways it is used by companies aching to appear trendy. Scott Stratten has packaged a number of these QRazy uses in his new book, “QR Codes Kill Kittens”.

A spleen-venting plea for sanity in the use of a technology that few people understand, the book is at its best when highlighting some of the stupidest deployments of the ugly bar code, including: 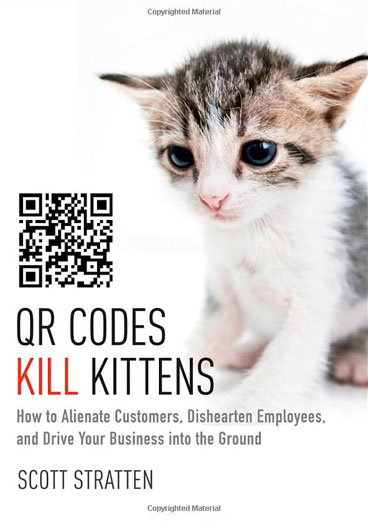 As Stratten reminds us in the well-worth-your-time video below, the QR code was first used by Toyota to keep track of its parts inventory, before marketing people got their mitts on it. It might well be that this is one tool that really only has one legitimate use, no matter how many surfaces some companies insist on slapping it across.