QR Codes continue to be this year’s biggest story, especially now that we’re starting to get some numbers to back up all of that hype.

Mobile app company Nellymoser claims that all action codes (QR, digital watermarks, etc.) together deliver a better response rate than direct marketing as a whole, according to a recent report. 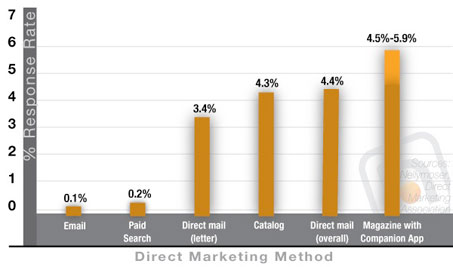 Based on the use of its Companion App campaigns from roughly October 2011 to October 2012, the median response rate of mobile action codes was 4.5 % to 5.9%, with the average (weighted by circulation) being 6.4%. Direct mail had a 4.4% response rate overall in 2012; catalogs 4.3%, according to the Direct Marketing Association.

Other stats from the Nellymoser report:

Between 7 p.m. E.T. Thanksgiving Day and 7 p.m. E.T. Black Friday, ScanLife logged more than 250,000 scans by people using its ScanLife app, with consumer electronics edging out other categories in scan popularity. During the third quarter of 2012, nearly 4 million people new to QR Code scanning took the plunge and scanned something, a 45% increase over the same period last year, according to the firm.