In the run-up to the Winter Olympics in Sochi, Russia this weekend, one topic’s been top of mind from the very beginning: the anti-gay stance of President Vladimir Putin’s regime. Knowing a grand marketing opportunity when they see one, British brewery BrewDog has come out with Hello, My Name is Vladimir, a double IPA brewed with Limonnik berries, and boasting a brilliant label.

Evoking Andy Warhol’s famous portraits, the branding features four multicolored head-and-shoulders illustrations of the Russian president, who appears to be wearing makeup. At the bottom of the label, the simple tagline “Not for Gays”. We are told in a BrewDog blog post that a case of the stuff has been dispatched to the Kremlin. 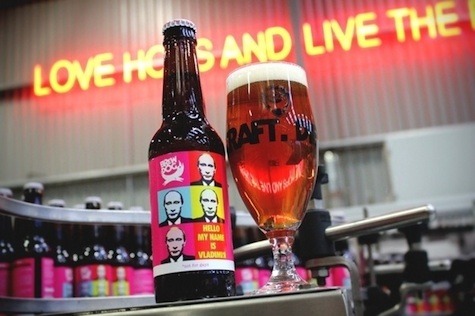 Of course what transforms this all from grade-school character assassination into cheery-beery satire is the homo-erotic image Putin has cultivated in his native land, often appearing shirtless while the state-run media reports on his “manly” exploits: wrestling, hunting, you name it.

It’s an image that the beer’s creators (at least we think they’re the beers the creators) sent up in a blog post in which one appears shirtless while the other proudly salutes Putin. 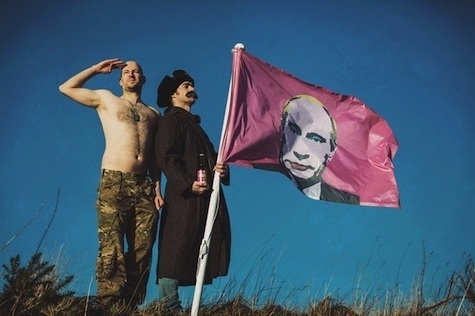 According to the brewery, “We are donating 50% of the profits from this beer to charitable organisations that support like minded individuals wishing to express themselves freely without prejudice.” We have no idea what that means – quite frankly we just can’t get past the label.