Letterpress Comic with a QR Twist

Letterpress creations have enjoyed an exuberant renaissance in recent years – particularly amongst those with one foot planted firmly in 21st century technology.

Todd Thyberg, the letterpress artist behind Minneapolis’ Angel Bomb Design + Letterpress, is in the process of printing “The Airship,” a three-color graphic novel, on an 80-year-old Vandercook 219 letterpress.

“The Airship” follows the efforts of a scientist to contact his father after he creates a device that whisks him and his dirigible to another dimension. Unfortunately, the scientist’s messages are hopelessly garbled. To make sense of them, readers must bridge the gap between the age of the story (and the vintage letterpress used to make it) and today by using their smartphones to read QR codes in the book – a Little Orphan Annie decoder ring for the iPhone age. (Thyberg suspects this may be one of the few times QR codes have actually been letterpressed.) 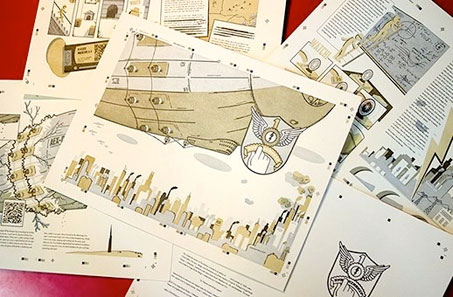 Financed by a Jerome Foundation Book Arts fellowship, the book is printed on Crane’s Lettra 110 lb. Ecru, “since it’s heavy enough to allow for some impression on both sides without bruising too bad,” Thyberg tells PaperSpecs.

The colors used are metallic silver, Pantone 4485 brown and Pantone 4525 tan. “Since this is the first book in a trilogy and predominantly self-funded, it had to stay small. The story is 12-pages long plus title page and colophon, and then the cover.”

Check out the Facebook page for some photos and video of the whole process, and the website once it launches Oct. 19th.