Google, the company that famously pledged not to be “evil,” apparently has taken no such vow against the nose-tweaking of that medium it’s determined to replace: print. Last week it was Google’s “Go Paperless in 2013” campaign. This time – ho boy.

Back in October, USA Today, as part of its redesign, launched a contest to find the most creative print ad they could. The prize: $1 million worth of full-page ads (about six pages) in that newspaper. And the winner announced in January was…yup.

The Google Creative Lab – developer of the newspaper-angering Google News aggregator – took home the prize for a simple design that was itself a paragraph swiped from an Oct. 4, 2011 New York Times story. It was doctored slightly to tout its Google+ social media network. 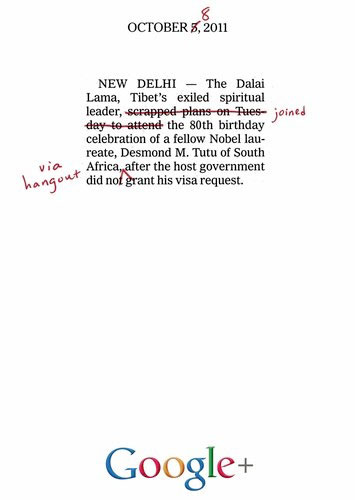 While USA Today President and Publisher Larry Kramer told The New York Times that he thought the ad’s creators “understood the palette” offered by print and took advantage of its strengths, the win is still a troubling one for anyone who cares strongly for print. (We should note that graphic designer Chip Kidd was one of the contest judges.)

For their part, Google told The New York Times that they would donate the $1 million ad space to those who need it, possibly the Hurricane Sandy relief effort. Kudos to the company for making a decision that inspires equal parts admiration and the sense that, once again, Google is thumbing its nose at the value of print.