If a co-worker casually mentioned that they were making a movie by taking photographs with a still film camera and then taping the individual negatives together, we’d probably think them eccentric at the very least. Yet when someone offers us the opportunity to plunk down $300 and up for 11 hand-drawn-type sets (grayscale PSDs – no font files here) because they resemble letterpress type, we’re all over it. TheOrganicType knows our weakness, which is why it’s rolled out a second volume of its “Letterpress Type” series.

Characters run from 1.5” to 5” tall. Each was hand-printed on paper, which was then scanned and optimized. Each PSD file has one transparent layer with isolated letters. 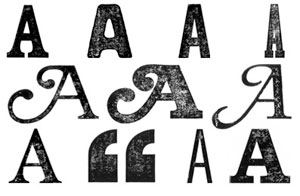 Huddle over your hot computer monitor, painstakingly isolating and placing each letter exactly where you want it – the 21st century equivalent of laying type. Can’t you just see a 19th century hot-type printer watching someone do that with today’s technology, shaking their head in disbelief? But they would probably also recognize that familiar madness that binds us all down through the years – an undying, slightly mad love of print.