Cover Highlights the Power of Design

After more than a decade of senseless, horrific attacks and foiled plots in the U.S., it’s drastically changed what feels appropriate when it comes to coverage. Once the usual who, what and why have been revealed, we’re bombarded with endless reruns of footage of the carnage, potted biographies of the victims, and tears. Tears from the families left behind, tears from people who have no connection to the event but cry their way into the coverage nonetheless. The Boston Marathon attack was no different. Except.

The bombing took place just days before the latest issue of Boston magazine was to go to press, which meant the staff had to replace its cover story and come up with a new cover on the fly. As this story behind the cover reminds us, they could’ve simply gone down the cliche route: a runner’s bib in the shape of a heart, a tattered marathon olive wreath. 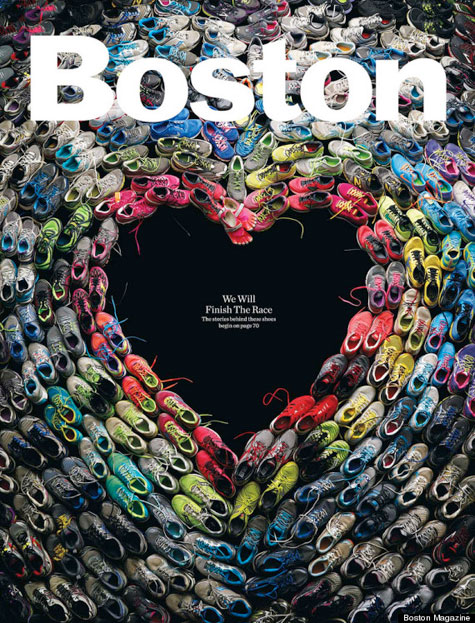 Instead, the cover you see above, comprised of shoes from Boston Marathon runners, is a stunning example of how a simple design can do more to convey that message of love and loss than days of tear-filled news coverage.