In the last few months, we’ve seen a lot of brinksmanship between the sustainable-paper lobby and the likes of Google over whether paper or electronic devices are better for the environment.

Now a Swiss newspaper called Die Wochenzeitung (affectionately known as “Woz”) has grasped the nettle by working the negative social and ecological impacts of electronics into its promotions for…the availability of its paper on those devices. 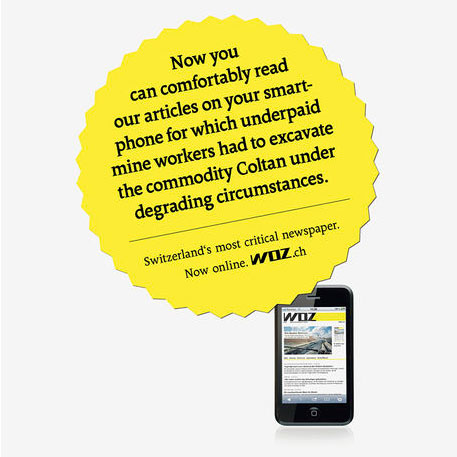 The campaign, devised by agency Leo Burnett Zurich, highlights the hard-hitting critical journalism of the paper with ads like the one above. Another reads:

Now you can comfortably read our articles on your power-consuming and electric smog-producing computer that later ends as electronic waste in Africa.

While an infinitely more interesting approach to the paper/electronics debate than any we’ve seen so far, the callousness of it must have been a hard sell for the newspaper, and will be an even harder sell for potential readers.