A Dinosaur of a Project

For pure logistical challenge, nothing quite matches the leporello – a tall book that folds concertina style. Traditionally these feature either panoramic views or maps on one or both sides, or a multitude of individual illustrations on each folded panel. Occasionally though, this strikes someone as being too easy, and something much more challenging is the result.

Cartoonist Dustin Harbin’s Behold! the Dinosaurs is a veritable petting zoo of ancient thunder lizards (along with “non-dinosaurian contemporaries”) that measures about 6 and a half feet (or about 13 feet front and back). 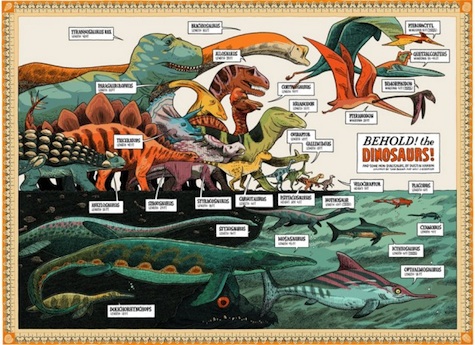 What made this project particularly challenging is that it features more than 100 beasts standing cheek by tail with each other across the whole 6-plus foot expanse. As Harbin told Comics Alliance:

“At first I thought I’d stitch together a series of smaller drawings, but because of the overlapping dinosaurs, it was just too complex. I decided to draw each dinosaur separately, which would allow me to move them around for a strong composition, and bob and weave if there were problems or I ran out of time or whatever. But then the problem was scale — if I was drawing each dinosaur on a separate piece of paper, I needed to draw them to scale so that I was doing very little growing or shrinking of the lineart. When you scale lineart up and down, you run the risk of the line-weights getting all weird.”

We particular loved seeing the hand-drawn storyboards Harbin drew as he plotted out how the different dinosaurs were going to fall across the concertina folds. 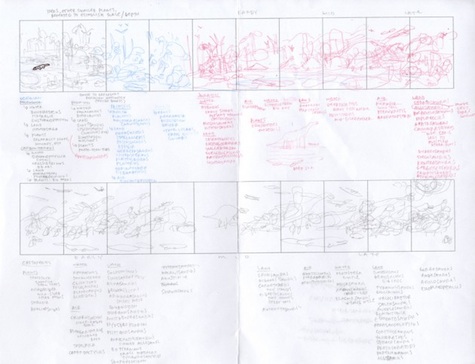 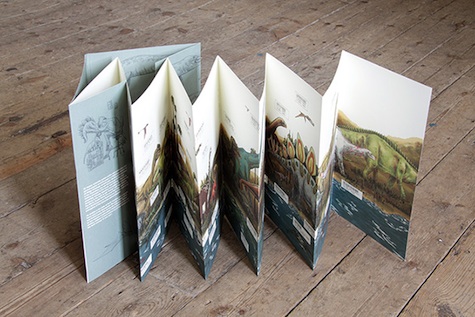