It’s a cruel world out there, as 19-year-old English student Peter Clatworthy discovered recently when he plunked down about $750 for the XBox One gaming console on eBay, only to receive a shock when his purchase finally arrived: No large box brimming with gaming goodness for him and his 4-year-old son, but a printout of a photograph of the XBox One box.

“They’d written on the back of it ‘Thank you for your purchase’,” Clatworthy told hometown paper the Nottingham Post.

A particularly D’oh! inducing detail: the eBay listing actually said the auction was for a photo of the gaming system. Be that as it may, eBay has investigated the situation and ruled that the seller must refund the young man’s money.

Said the fleeced consumer philosophically, “At least we’ve now got something to laugh about in the years to come.” As do we all, Peter. As do we all. 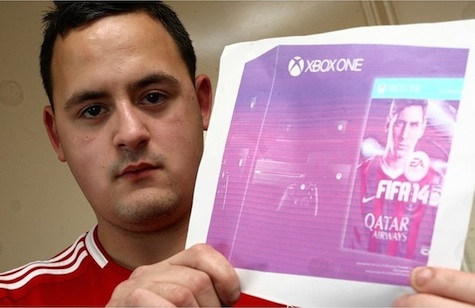