For all the gee-whiz gushing over 3D printing this year, one thing has been conspicuously absent: paper! While we’ve seen these machines manufacture everything from clothing to firearms, it’s almost always been out of some form of resin. 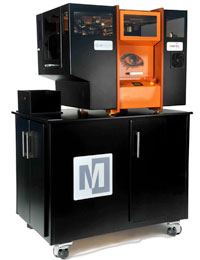 Fortunately, Ireland’s Mcor Technologies has been quietly developing a machine that fabricates 3D creations (such as the skull above) by the application of adhesive to simple printer paper, administering 2D mechanical cuts to each layer.

In 2008, Mcor unveiled the Matrix 300+, the monochrome version of its 3D printer. This month, it launched Iris, which prints more than a million colors at 5760 x 1440 x 508 dpi using four (CMYK) ink cartridges. It can handle A4 standard office paper (80 gsm) and letter-size (20 lb.) sheets. What comes out the other side is limited only by your imagination: architectural models, 3D maps, medical models, movie props – you name it.

To get things rolling, Mcor and Staples recently announced “Staples Easy 3D,” a new service whereby people can upload their 3D files to a special website and pick up their Iris-printed 3D products at their local Staples stores in The Netherlands and Belgium starting the first quarter of next year. Rollout to other countries is expected thereafter.