Invercote: ‘The Best Paperboard there is for Pop-ups’ 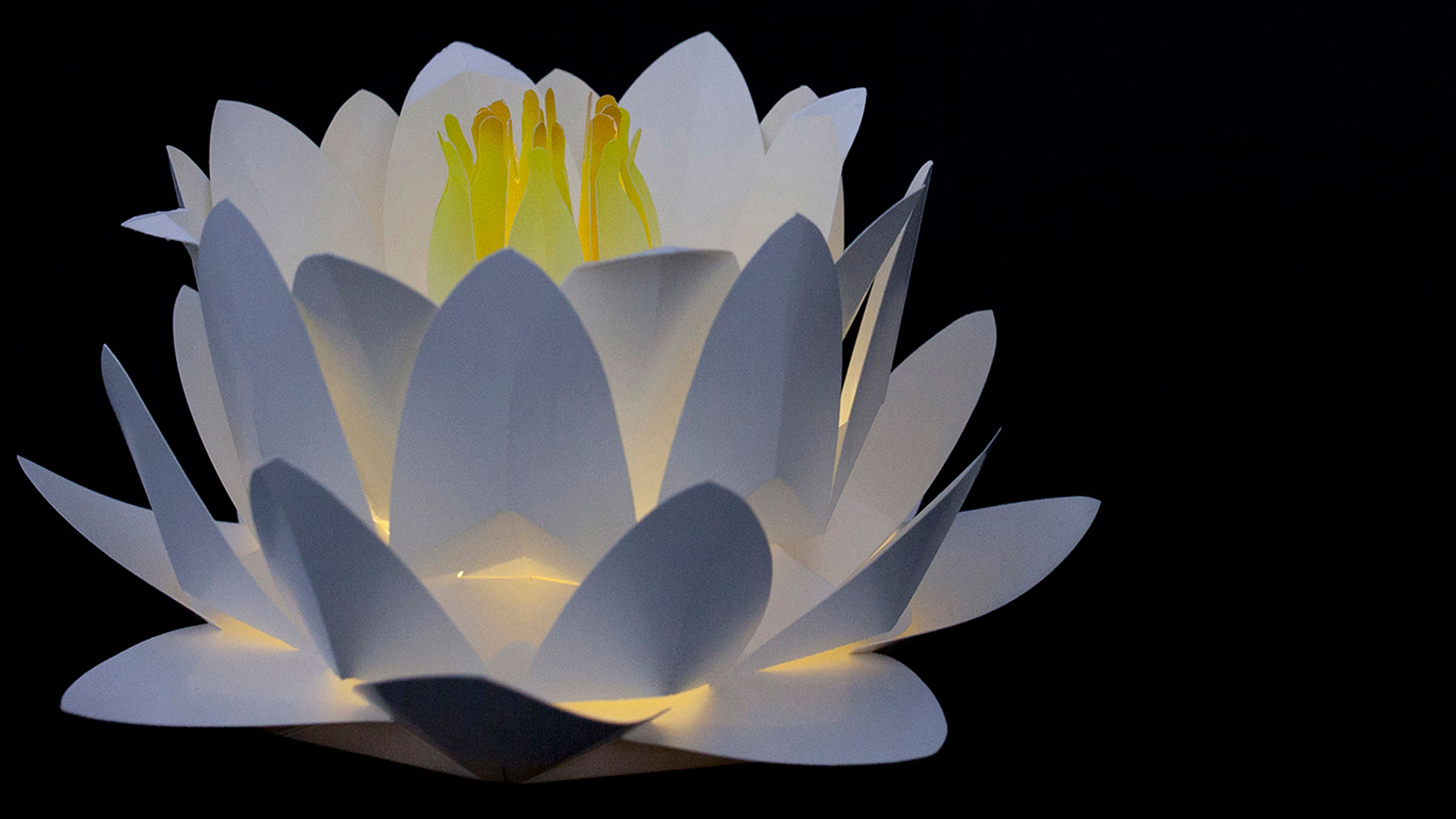 PaperSpecs was well into its recent Iggesund-sponsored “Pop-up Magic” webinar when attendees broke the Internet, or our small part of it, anyway, and not a Kardashian in sight! No sooner did we post a link enabling attendees to order an amazing paperboard water lily that presenter Iain Smyth had displayed than poof – that link crashed as all available kits were instantly snatched up. (Don’t worry, new ones are currently in production.) And the paperboard that made that water lily possible? The same one known the world over for bending without cracking: Iggesund’s Invercote, of course.

Bringing a Virtual Lily to Life
This whirlwind of popularity was hardly surprising. That water lily has been inspiring awe – and the occasional theft – since Sweden’s Iggesund Paperboard first approached Iain, a designer and paper engineer, with a very unusual request. They had already produced an animated video featuring an intricate virtual paper water lily when they challenged Iain to create a tangible version for an exhibition.

“Normally people want me to make a paper or paperboard version of an object from the real world,” explains Iain who, with his wife, Alison, runs a Bristol paper engineering company called Papersmyths. “Now I had to turn the 3D artist’s creation into a real paper object.”

The water lily turned out so well that several were actually stolen in the first hours of the exhibition! The unusual, complex design drew a huge crowd at the Iggesund booth, artfully demonstrating the versatility of Invercote paper.

‘The Better the Board, the Better the Pop-up’
Iain’s interest in paper-based materials has been a driving force for him over the years, he says. The whiteness of the paper when it hasn’t been printed on and its purity have always fascinated him.

“And of course when you cover it in print it becomes so different and so powerful. Invercote is really the weapon of choice – it’s the best paperboard there is for pop-ups. The qualities that so perfectly lend themselves to this sort of dimensional design are its stiffness and the fact that it folds so well.

“When I am working, I crease it with the back of a scalpel first – it doesn’t crack when you fold it. If you use a softer board it will tend to be floppy. Pop-ups have to work in many different environments. The better the board, the better the pop-up.”

Recipe for an Amazing Pop-up
“I think a good pop-up is one that engages you, one that wows you with a moment of astonishment,” says Iain. “I also think its presentation and functionality are important; the graphics, the illustration, the production, how well it’s made and how smoothly it works are all critical elements.”

Recalling a detail in the construction of the “Angelina Ballerina Pop-up and Play Musical Theatre,” a series of books about a little mouse who is a ballerina, he says, “Something I was secretly very proud of was a mechanic in the finale. Angelina is dancing on stage and I designed a pull tab that made her spin 360 degrees – no one will ever know the work that went into that!”

Love to have a water lily of your very own? Request your DIY water lily kit right now! (Assembly instructions can be found here.)

Note: If you’d prefer a ready-made water lily with an integrated LED-light, you can purchase one directly from Papersmyths.