Though today’s printing and finishing technologies have given us the ability to create stunning packaging, little of what’s produced truly evokes the sense of wonder we all hope to achieve when we approach new clients, or remind existing ones of our capabilities. Not so these enticing promotional pieces from our good friends at Meyers Printing. Available in three different themes, these unique packages expertly blend clever construction with – in the case of the box I received – good old-fashioned holiday nostalgia.

Designed by Meyers Printing’s Domonic Ableidinger and Michelle Willinganz and offset printed by Meyers, the piece arrives in a pristine White corrugated box decorated with an illustration that ties into the theme of the piece inside, alongside the printer’s logo. 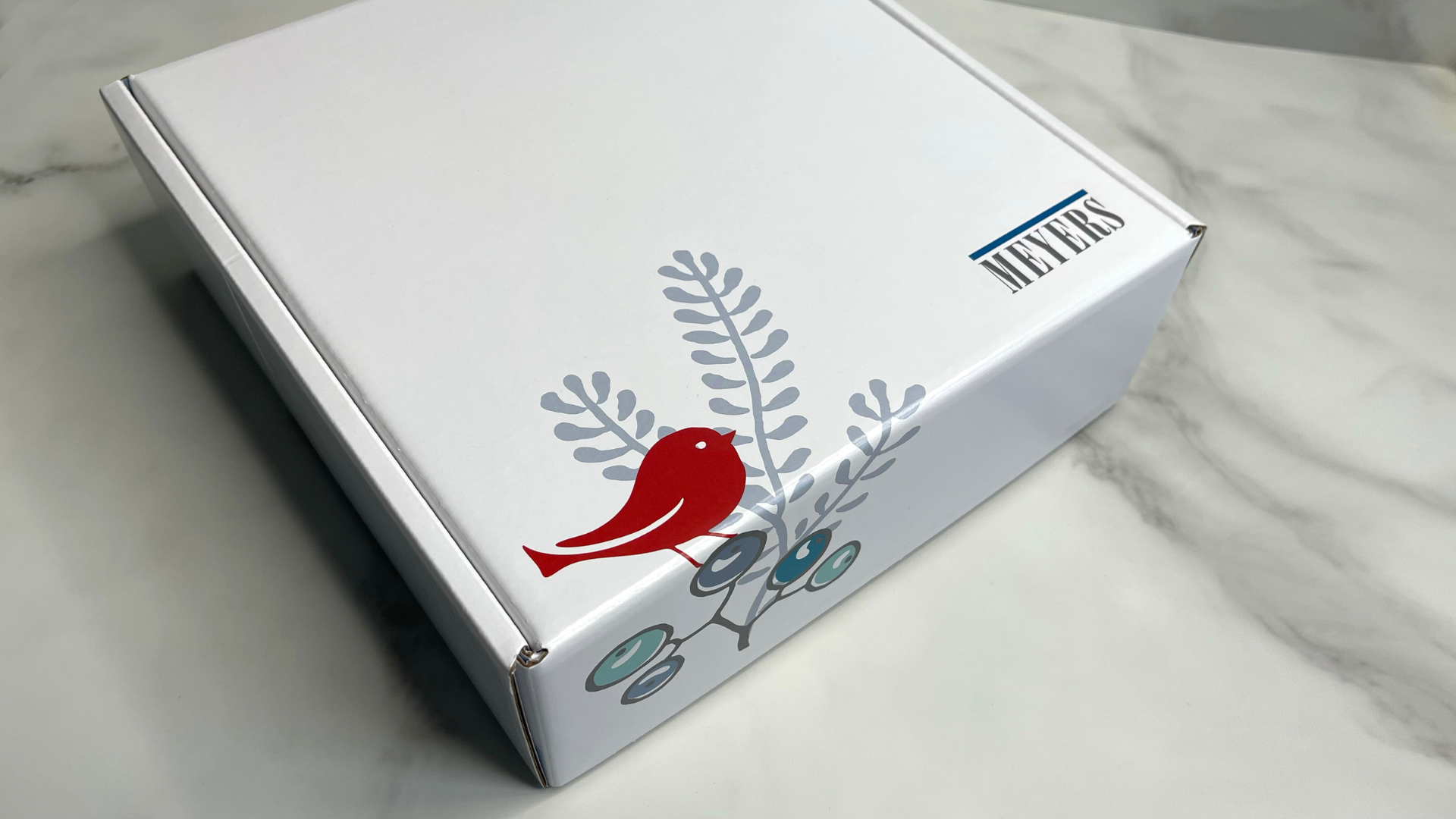 Opening it reveals another delightful illustration on the inside of the lid, as well as a message that gets right to the point: “It’s the most wonderful time of the year…to make your holiday packaging!”

Inside the box rests the promo piece itself, snuggly nestled within a White die-cut insert, ensuring that it doesn’t shift during transit. As we’ll see, this eventuality was guarded against throughout the creation of this piece.

The top features an illustrated box affixed to the lower telescoping base by a zip strip printed with appropriately themed holiday banter, which wraps around all 4 sides of the package. 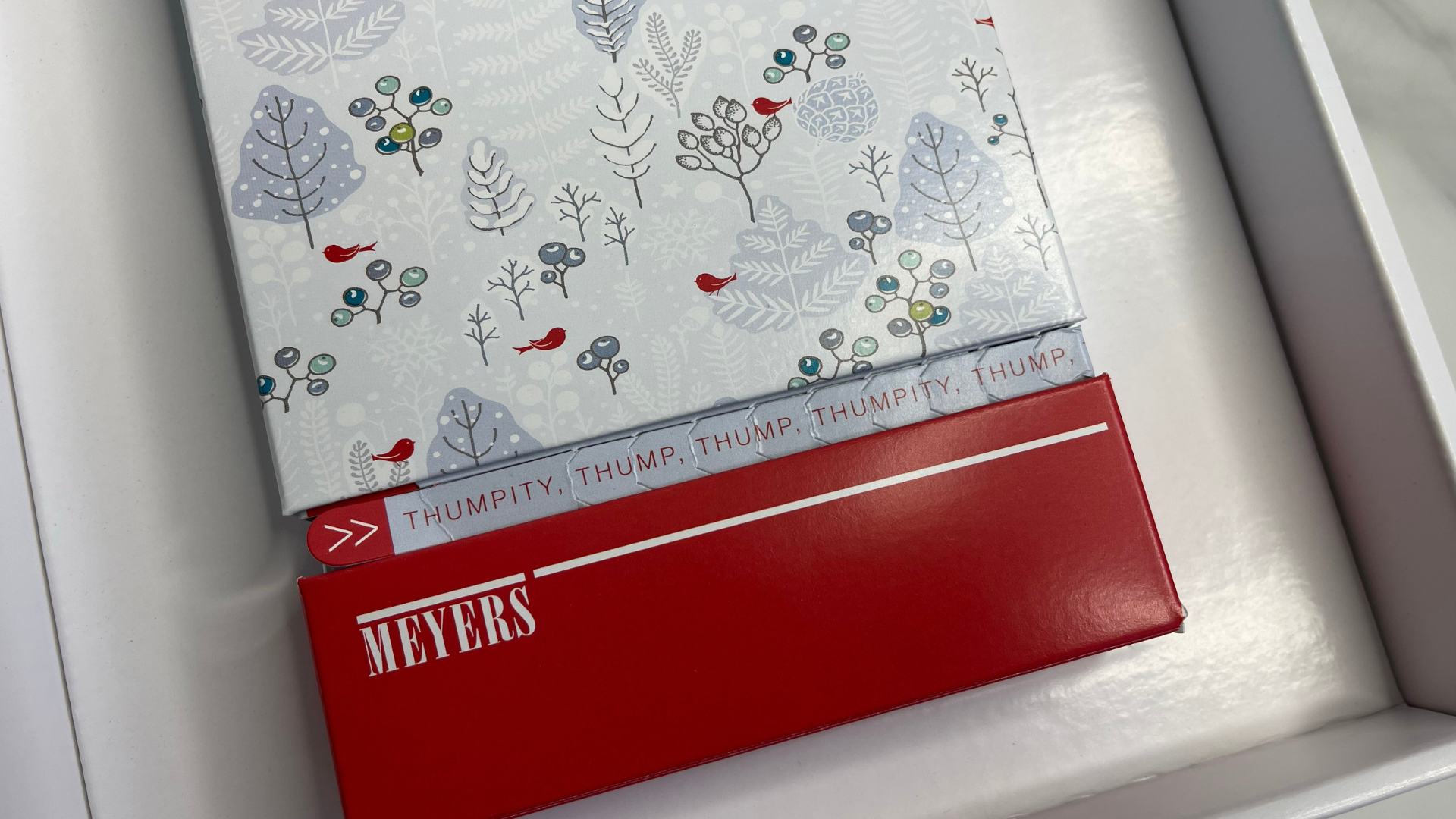 Removing the strip allows you to slide off the top to reveal…a tiny winter wonderland!

Inspired by traditional snow globes and the holiday nostalgia of the people at Meyers Printing, the village scene inside is comprised of 3 different die-cut illustrations, which gives it a powerful 3D effect made even more impactful by the silhouettes of buildings printed on the inside of the box behind them all. The details are perfect, rewarding us with new discoveries the longer we study the scene. 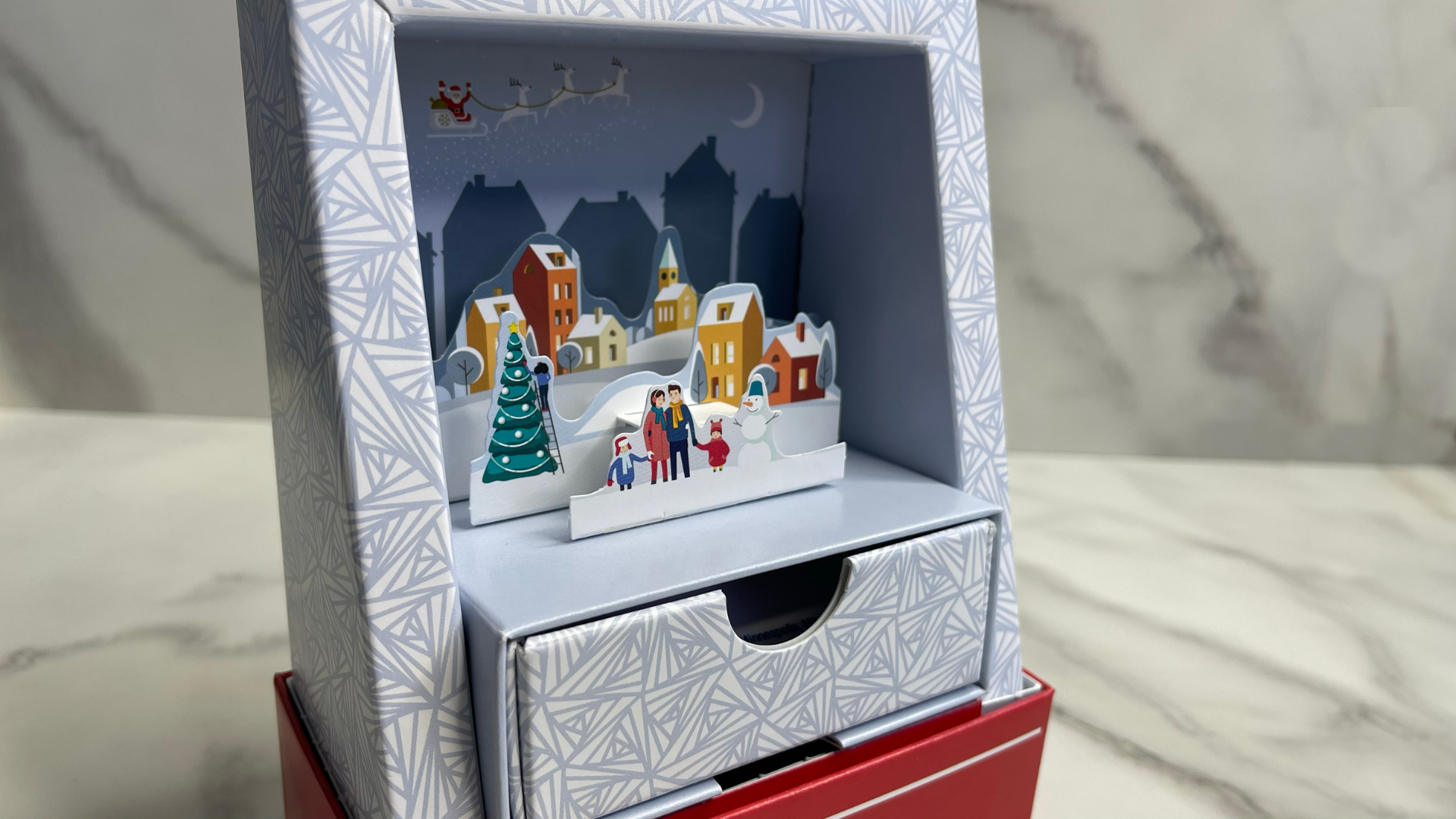 But wait, is that a thumb notch beneath the “stage?” Yes, it is! A gentle tug opens what turns out to be a drawer in which Meyers business cards are invitingly presented at an angle for easy viewing thanks to the clever way the drawer was constructed; the cards can be easily removed with the help of another thumb notch. Again, it’s the little details that make this piece so extraordinary. The next one, however, is far from “little” – it’s nothing short of genius. 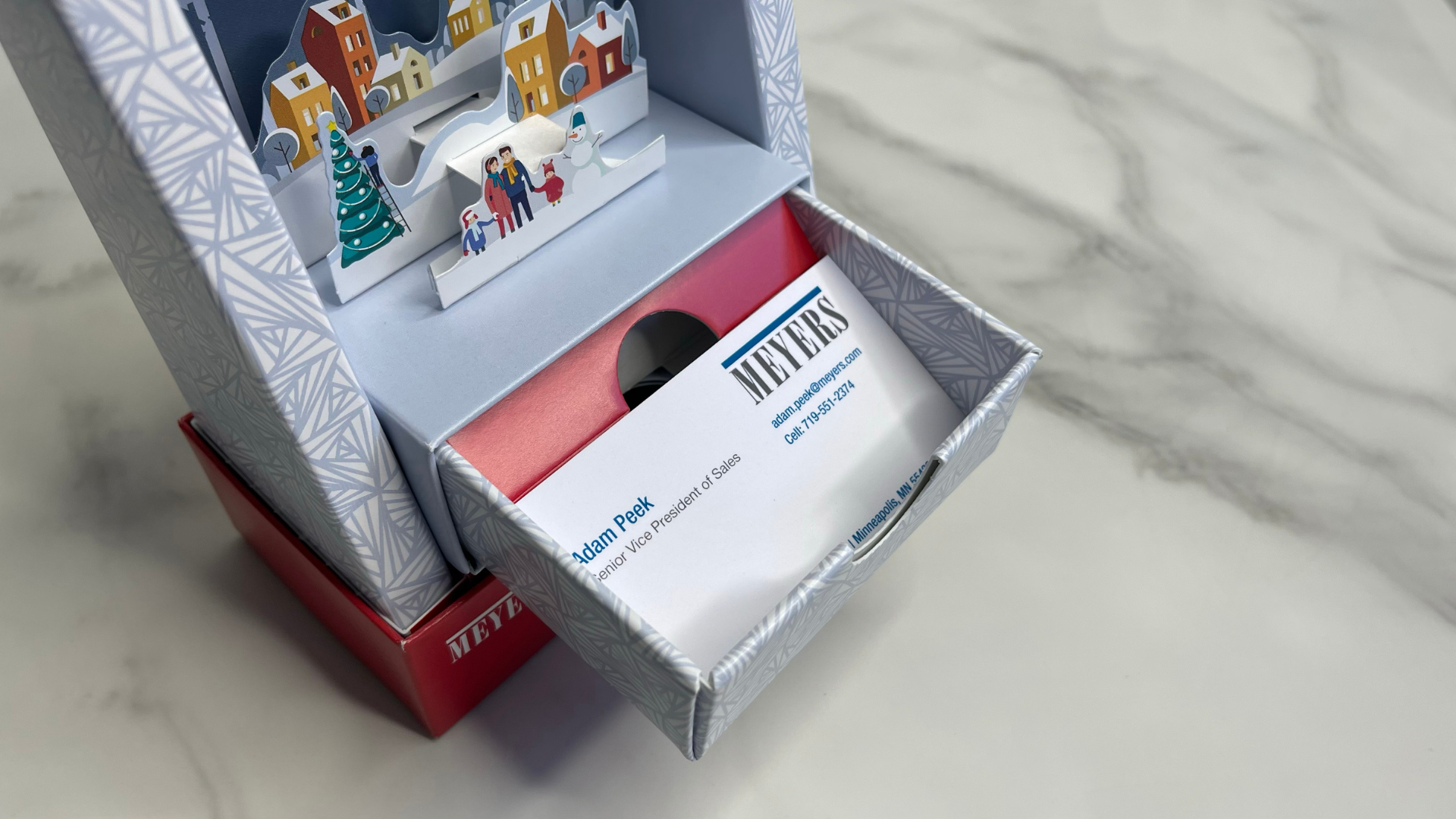 That’s because the entire business-card drawer and street scene folds up like a Murphy bed to reveal one more surprise beneath: a secret compartment that can be opened with – you guessed it – another handy thumb notch! Hidden inside is a festive jingle bell, though this doesn’t come as a complete surprise for those of us who automatically shake gift boxes when we receive them 😉

From the clear call to action on the inside of the shipping box lid to the interactivity that allows you to fold and unfold the wintry scene in the promo itself, I can see this piece gracing designers’ shelves and desks long after the rest of our holiday decorations have been packed away – a creative gift that will keep on giving all year long. 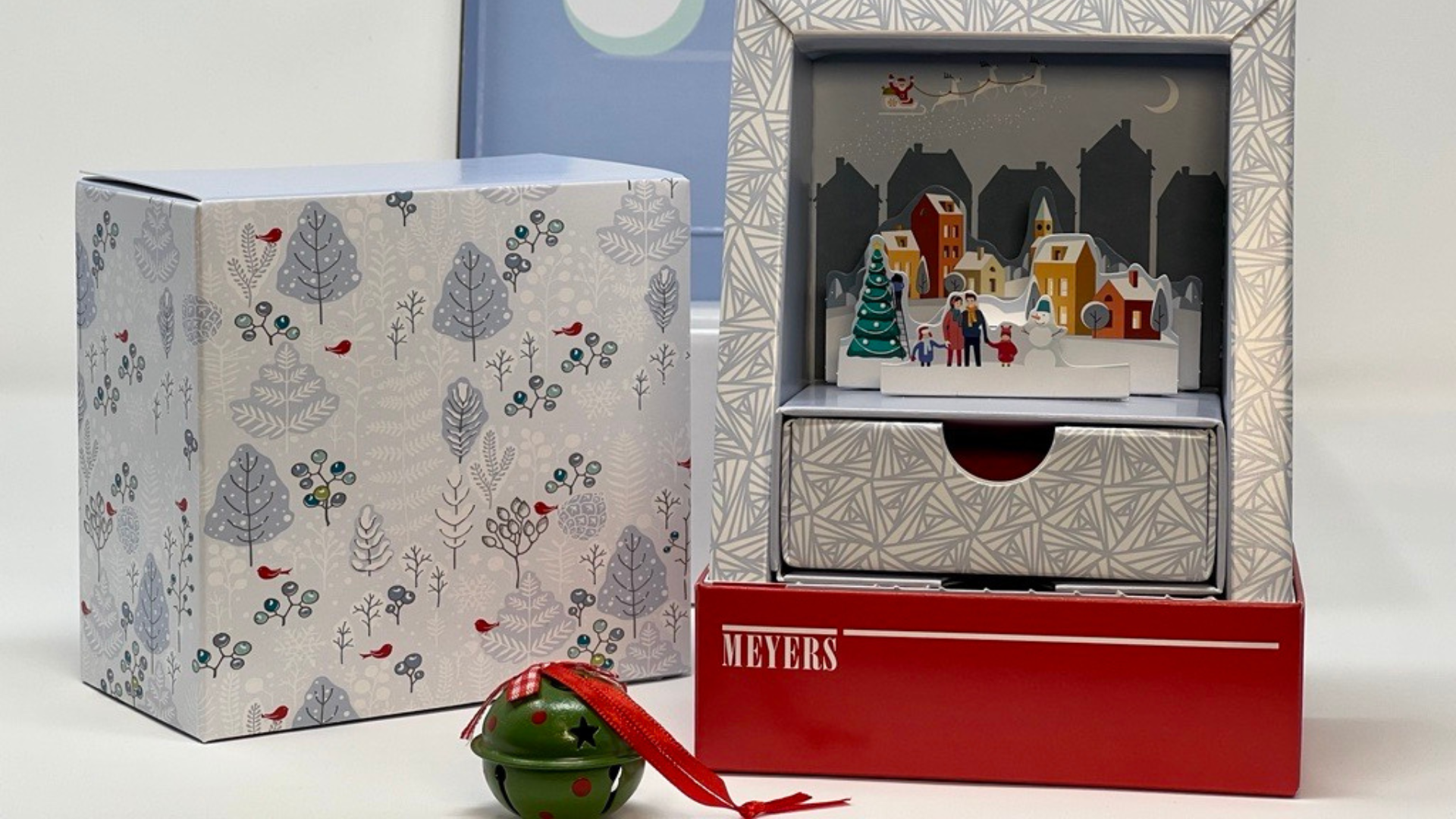