Always talk to the printer to find out the size of paper they will print the final piece on. We came up with the final size so that everything could be printed on one sheet.

When “Stars Wars” and comic book characters are the flavors du jour on television and in theaters, it’s a good time to have your geek flag flying, particularly if you’re a design studio. The nerdy-to-the-core guys at Eleven19 alerted the masses to its 11th anniversary bash with an invitation that somehow manages to evoke comic books and football simultaneously, before getting more playful still inside. 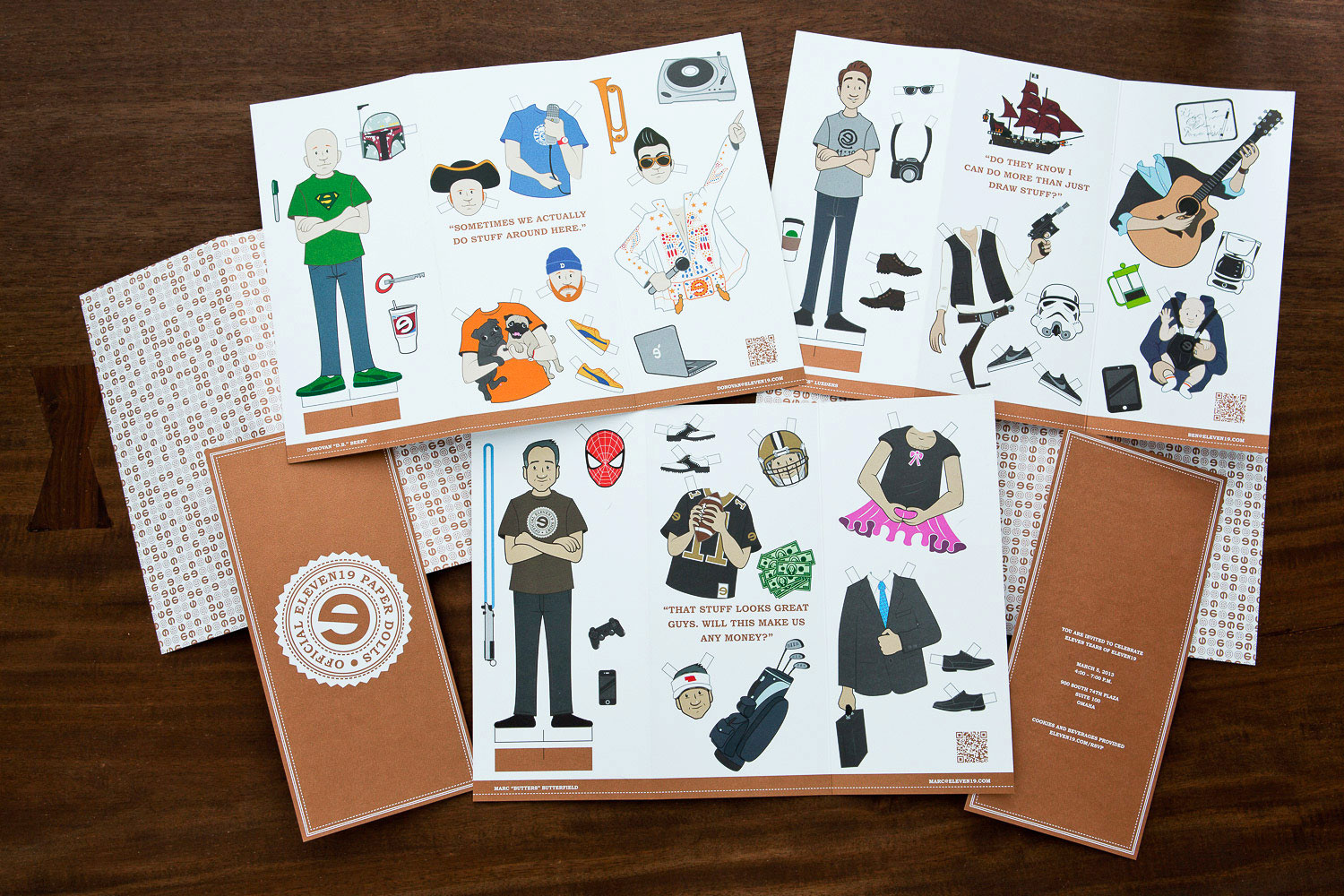 The covers of the main 4 1/8″-x-9 1/8″ invitation are football brown (Pantone 876 metallic copper ink for you color wonks) and subtly evoke the ball’s traditional white lines and stitching. The use of Neenah Classic Crest with a stipple finish was an inspired choice for this, completing the illusion.

“The area paper spec rep, Megan Rold of Field Paper, stopped by our office while we were working on the project, and we took the opportunity to ask her what Neenah brand paper would work well,” says Donovan Beery. “She mentioned the stipple finish, which was just what we wanted – even if we didn’t know it.” 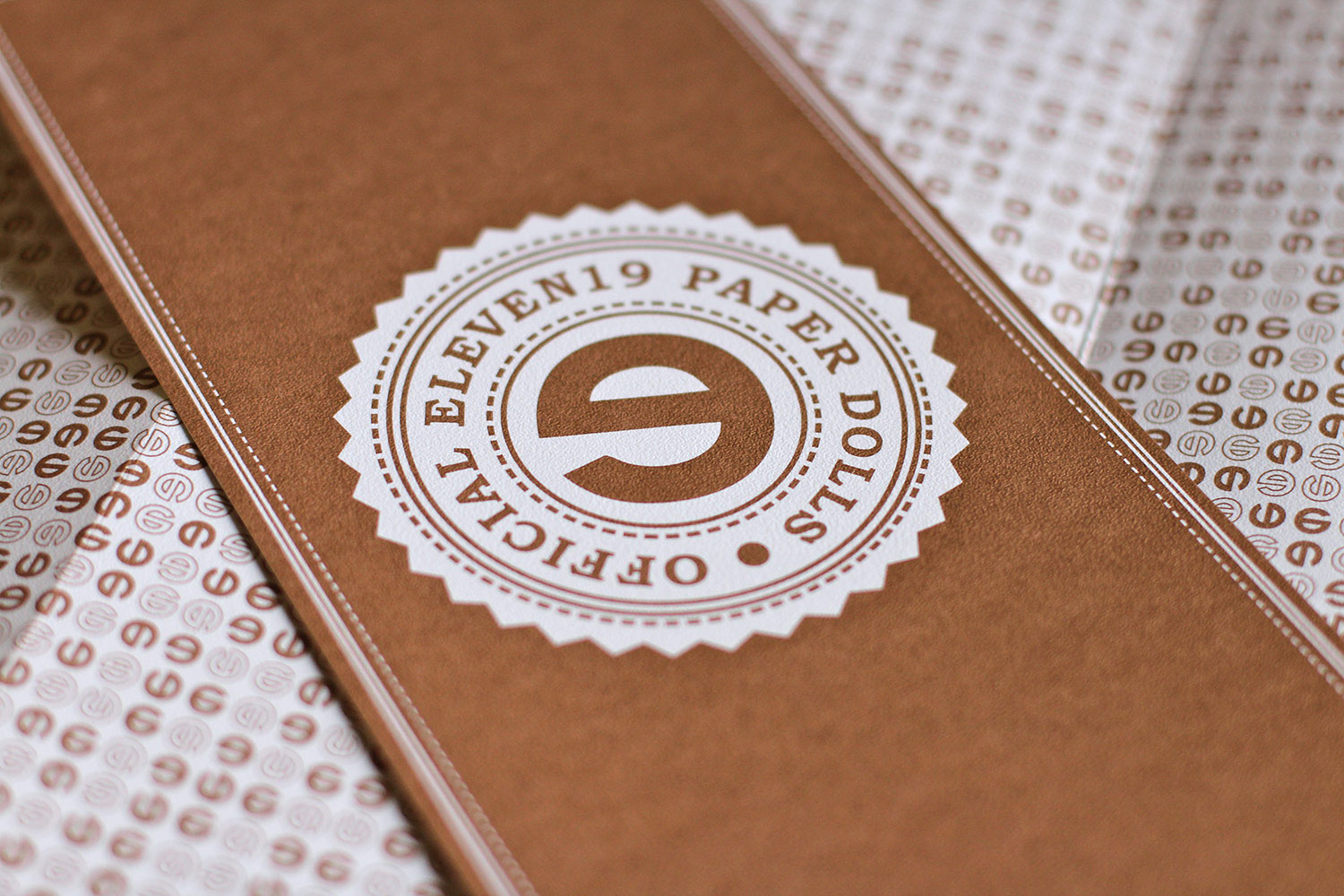 Running contrary to the football theme, the backward “e” logo and seal are classic references to geekier motifs of comic books past, from the much-lionized “EC” comics of the 1950s to superhero emblems like Superman’s iconic “S.” And if you have any doubts about the geekiness of these allusions, the three inserts that accompany the invitation will remove them.

Each focuses on one of the design studio’s staff, depicting them as paper dolls that you can cut out and dress up with items specific to their passions, responsibilities and interests. Dress up Marc Butterfield as Spider-man or a football player, or Donovan as Boba Fett (don’t forget his laptop!).

“We had a great illustrator on staff,” says Beery, “so what better way to show off Ben’s talents but to draw us in some fun situations?”

Not only are these great ways to grab someone’s attention for the anniversary event, they’re an excellent means of humanizing the principals of Eleven19. After all, who WOULDN’T hire a designer who comes with his own fold-on Elvis impersonator getup? 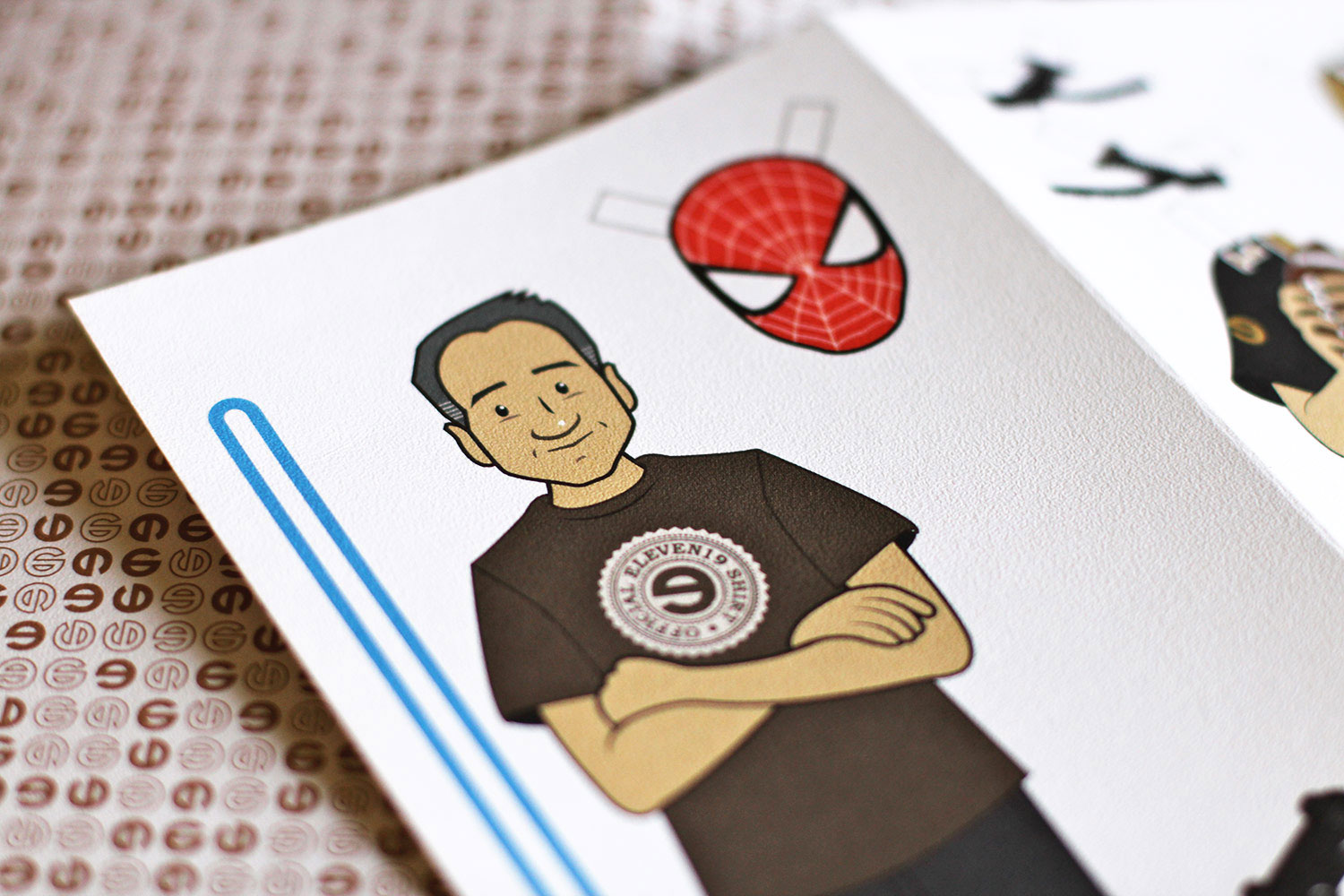 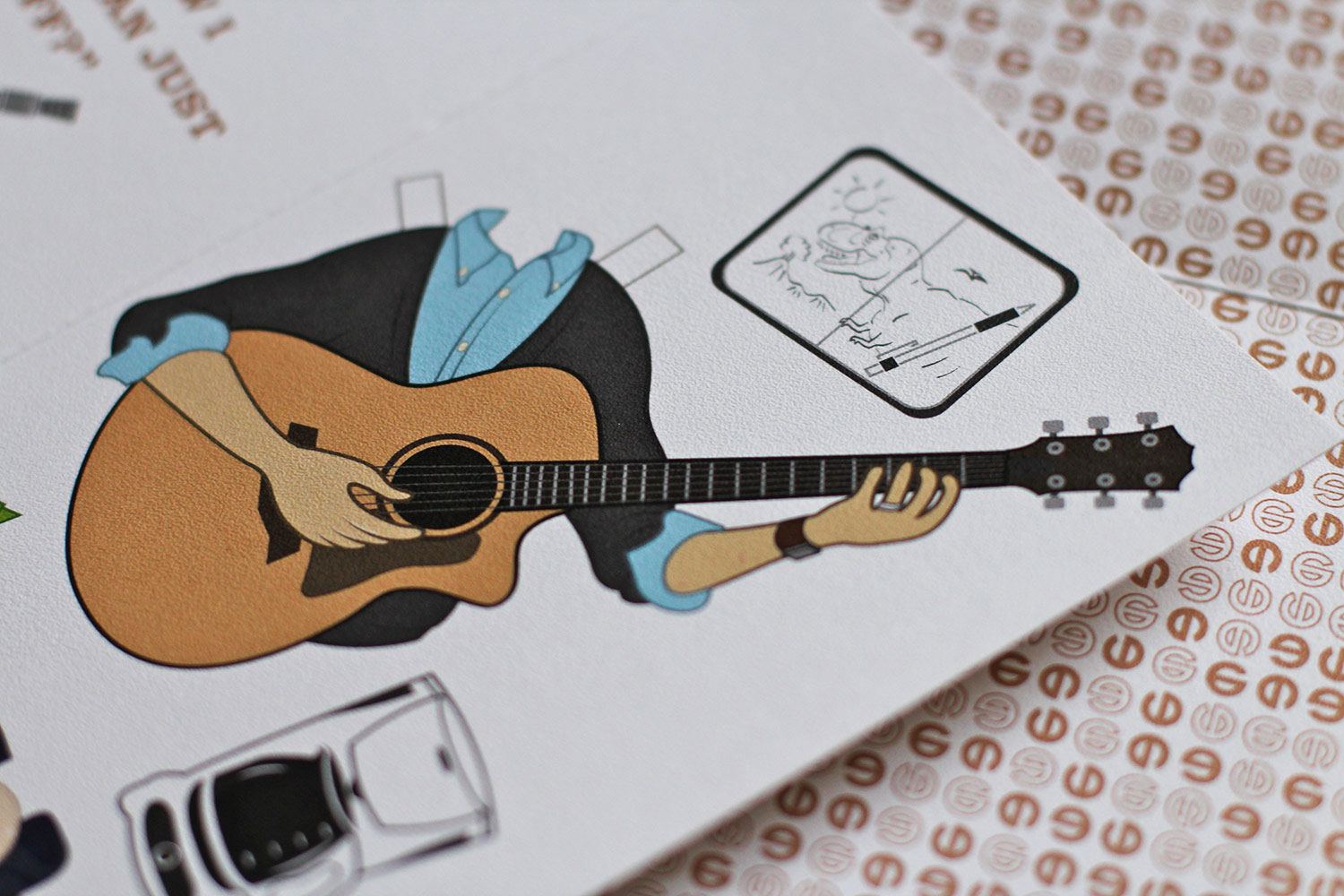 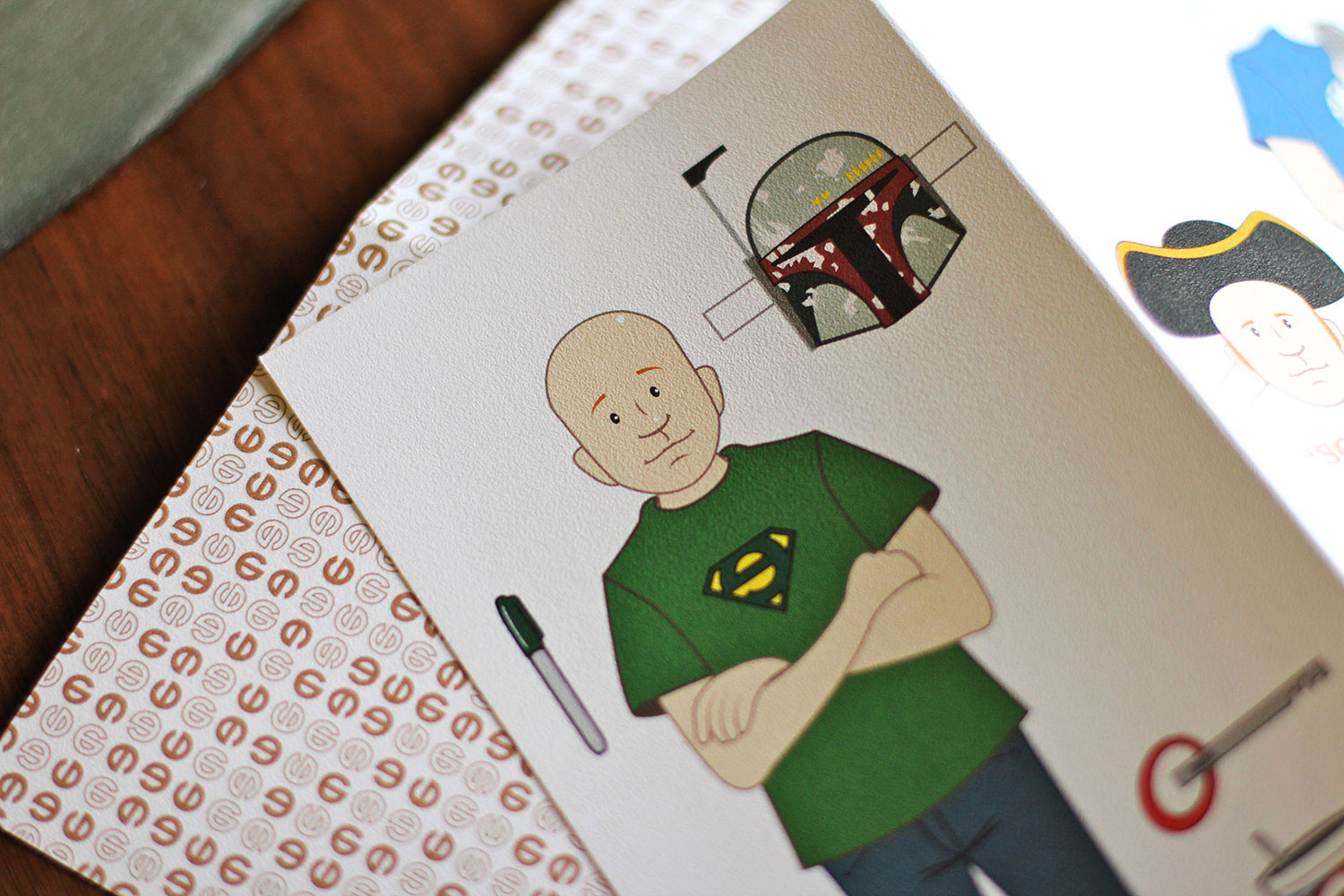 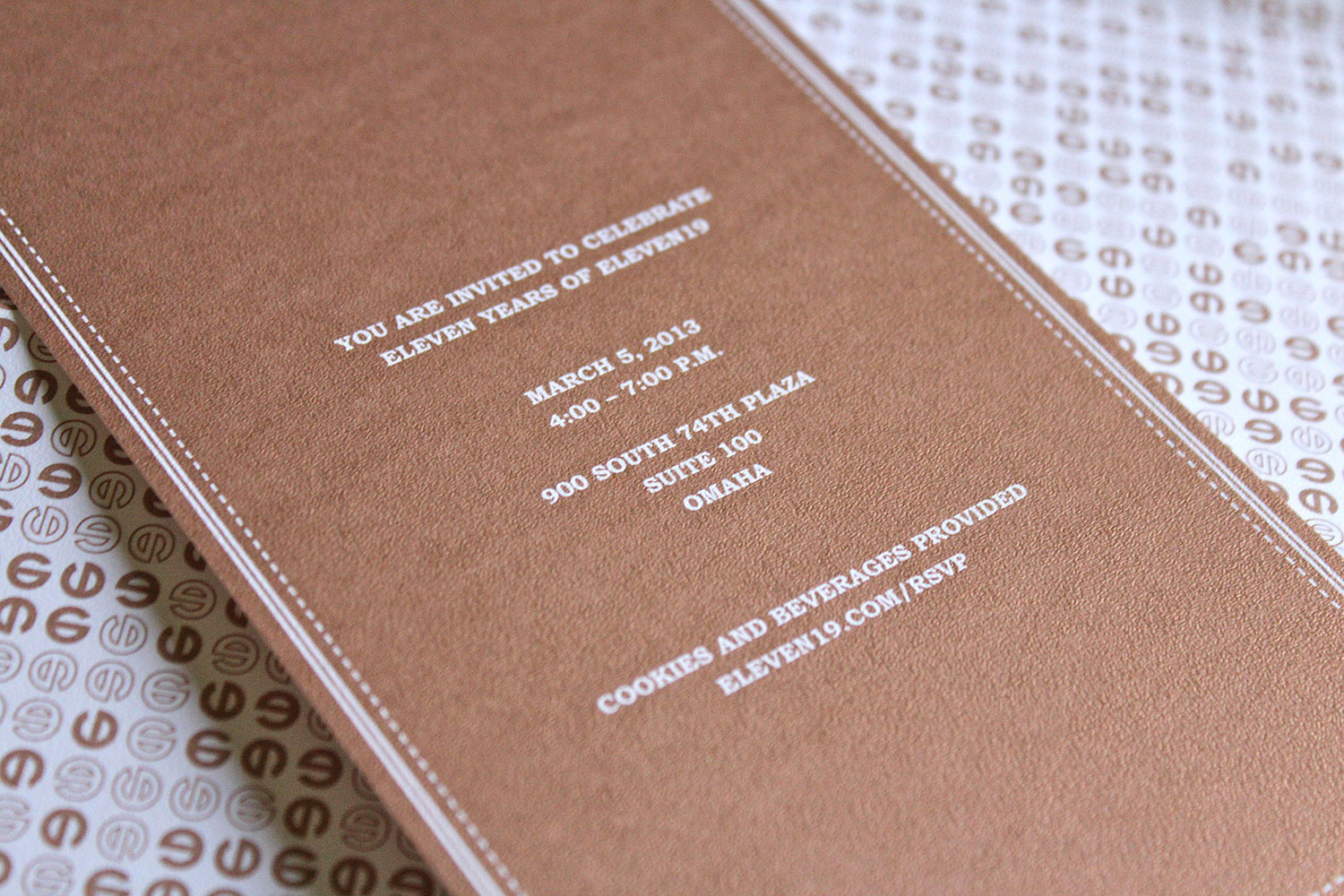