As designers, we want our work to surprise and delight. Thankfully, today’s printing techniques give us a nearly infinite number of ways to do so. One of the most colorful examples from this year is this charming notebook from our friends at Giraff. The Tel Aviv design studio has often embraced the element of surprise in print as a way to explain its unusual name to new and potential clients alike, such as its use of an unexpected oyster fold in this leave behind. Yet with its notebook, it has kicked things up a notch by introducing a bold splash of color into a cool design that emphasizes a consistent marketing message. 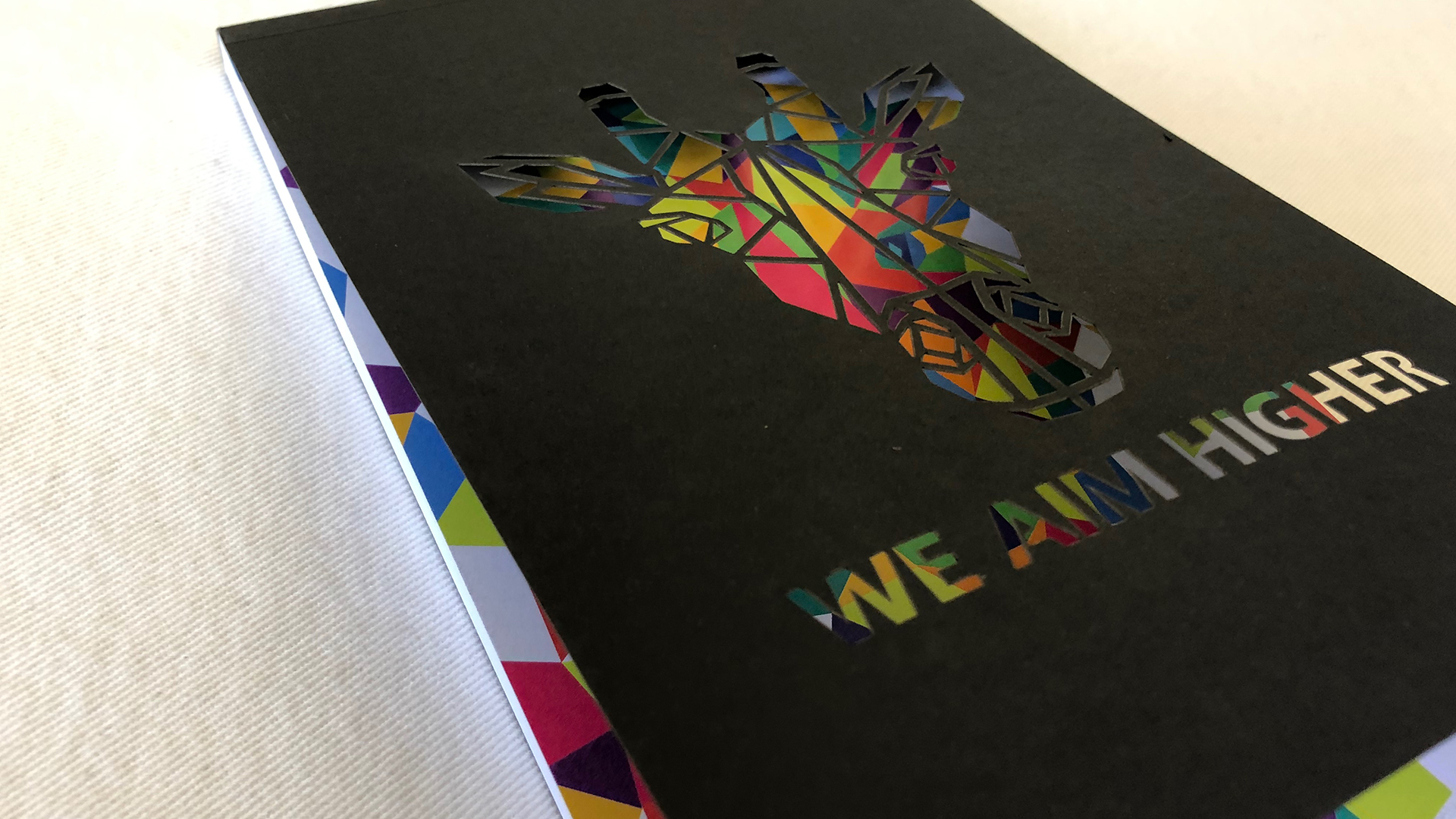 Taking a closer look at the cover reveals that the many details of the giraffe head we find there are actually made up of several intricate laser cuts [PRO Guide to Laser Cutting] in the Black 300 gsm (200 lb.) Favini Burano paper: everything from the eyes and nostrils to the different contour lines that give it such an arresting three-dimensional look. The studio’s tagline (essentially the answer to the question “Why are you called Giraff?”) is also laser cut [PRO Tip: Your Laser-Cutting Questions Answered!] into the paper: “We aim higher.” So where are all of these beautiful colors coming from? The answer presents itself the moment you lift the cover and – 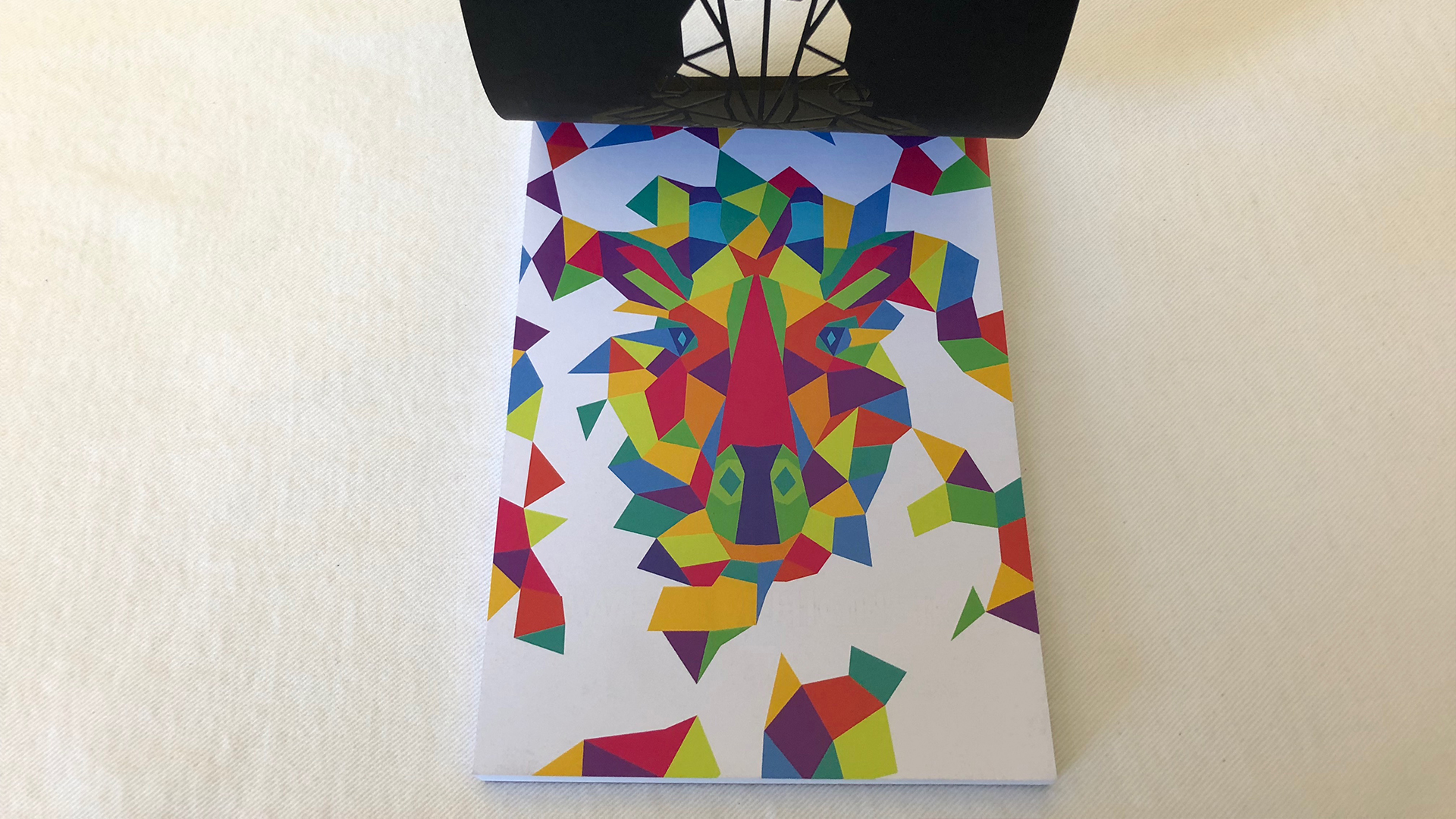 Yikes! A lion leaps out from the page just beneath – printed on 90 gsm (60 lb.) Favini Burano – lending a ferocious vitality to the “We aim higher” phrase, as if to say “Look closer at this Giraff and you will find it has teeth.”

The lion is actually made up of multicolored geometrical shapes that not only bring the cover to life with their appearance through the laser cuts, but also contain the giraffe-head design, too. The colorful shapes are arranged in such a way that one of them even manages to highlight the “aim” in the “We aim higher” cover phrase in bright yellow. 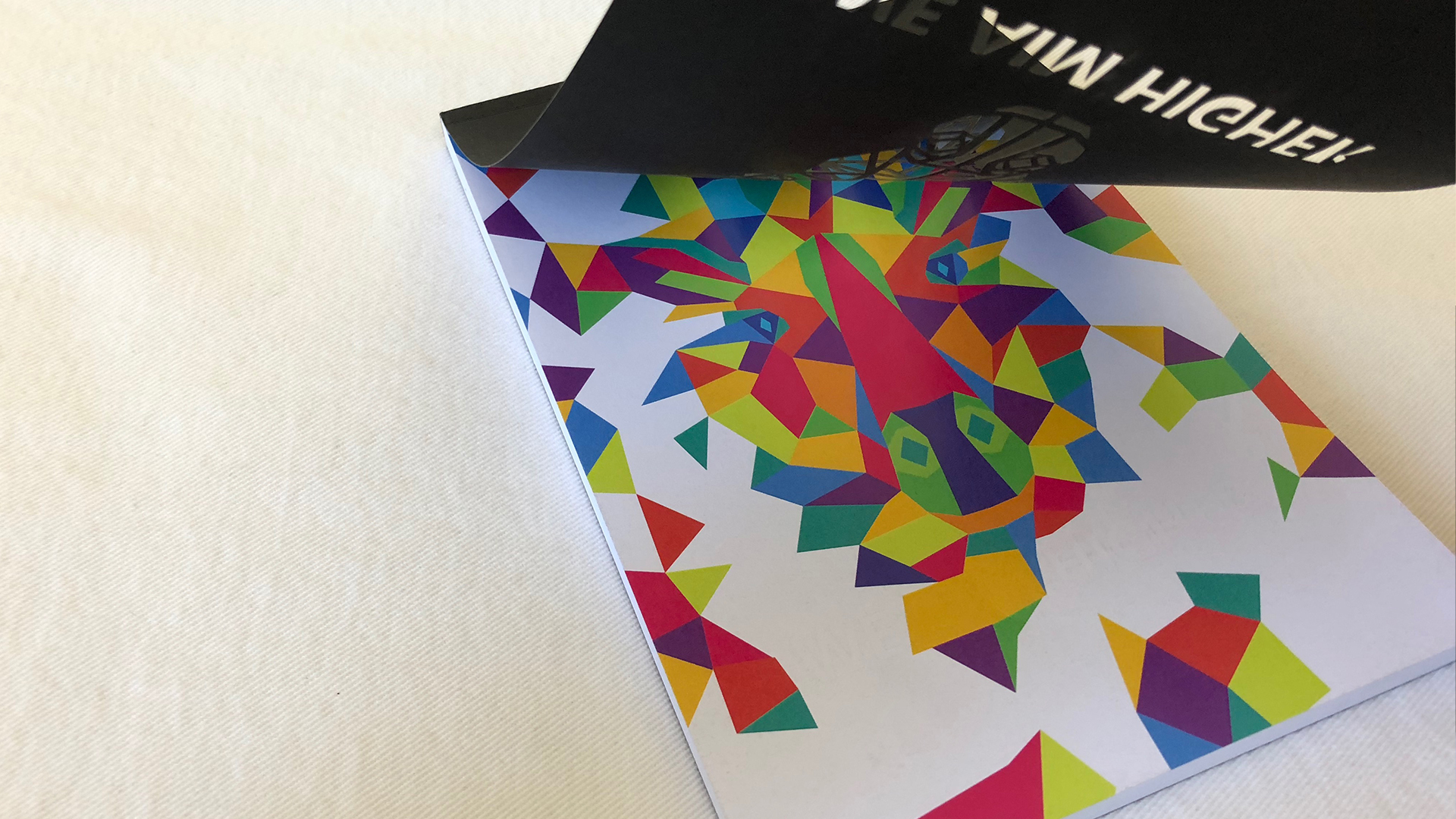 “I wanted to give my clients a gift that would reflect the company’s message, and something they could not forget,” explains studio founder Tal Huber. “I wanted it to be a desirable gift that will surprise them and convey the message that we are a creative and original branding company.”

The combination of sharp bright and neon colors and sophisticated laser cuts gives the cover the look of an inspiring stained-glass window – as if the notes and sketches contained inside the notebook are so brilliant and so profound, they can’t help but shine through. 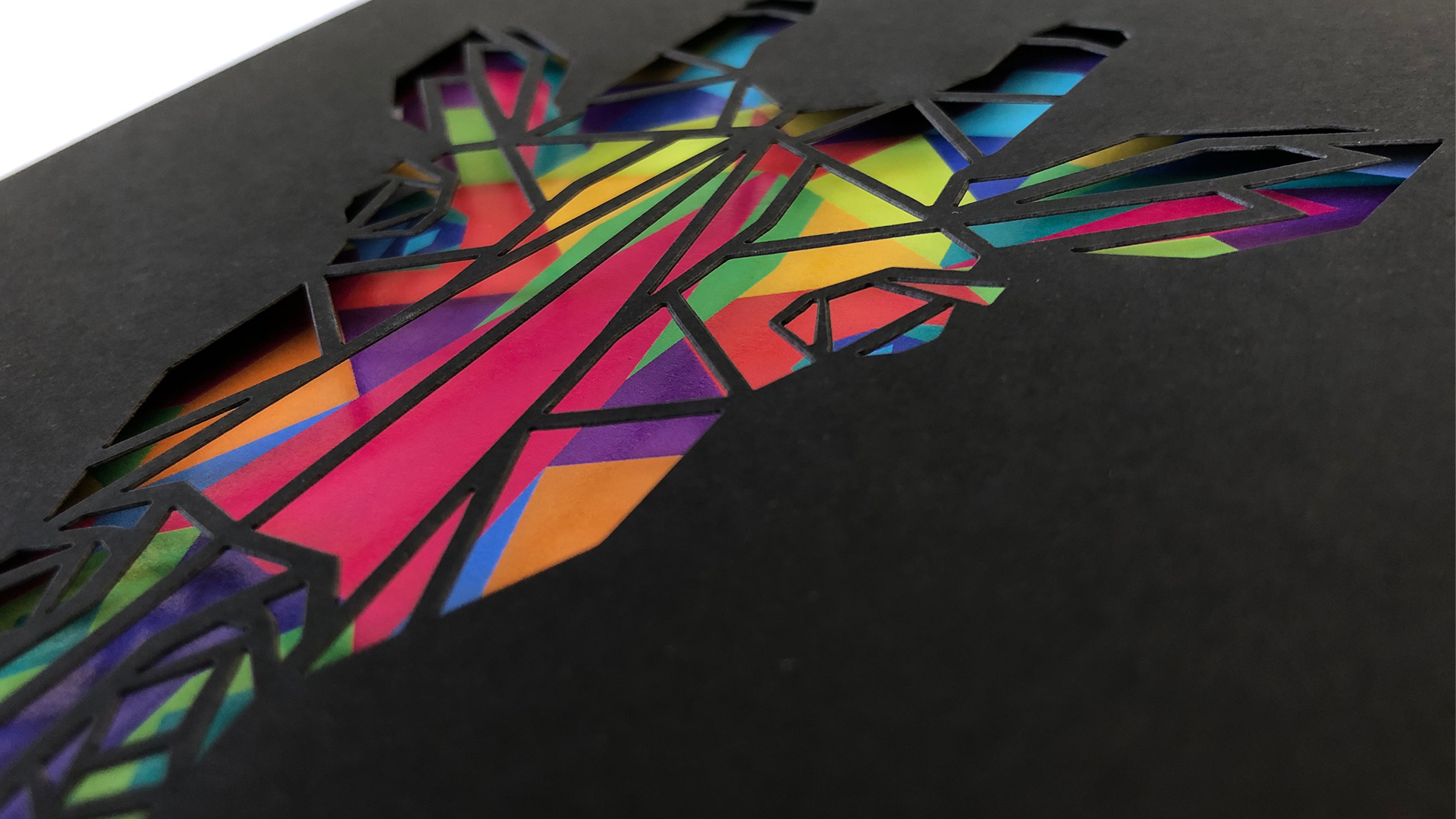 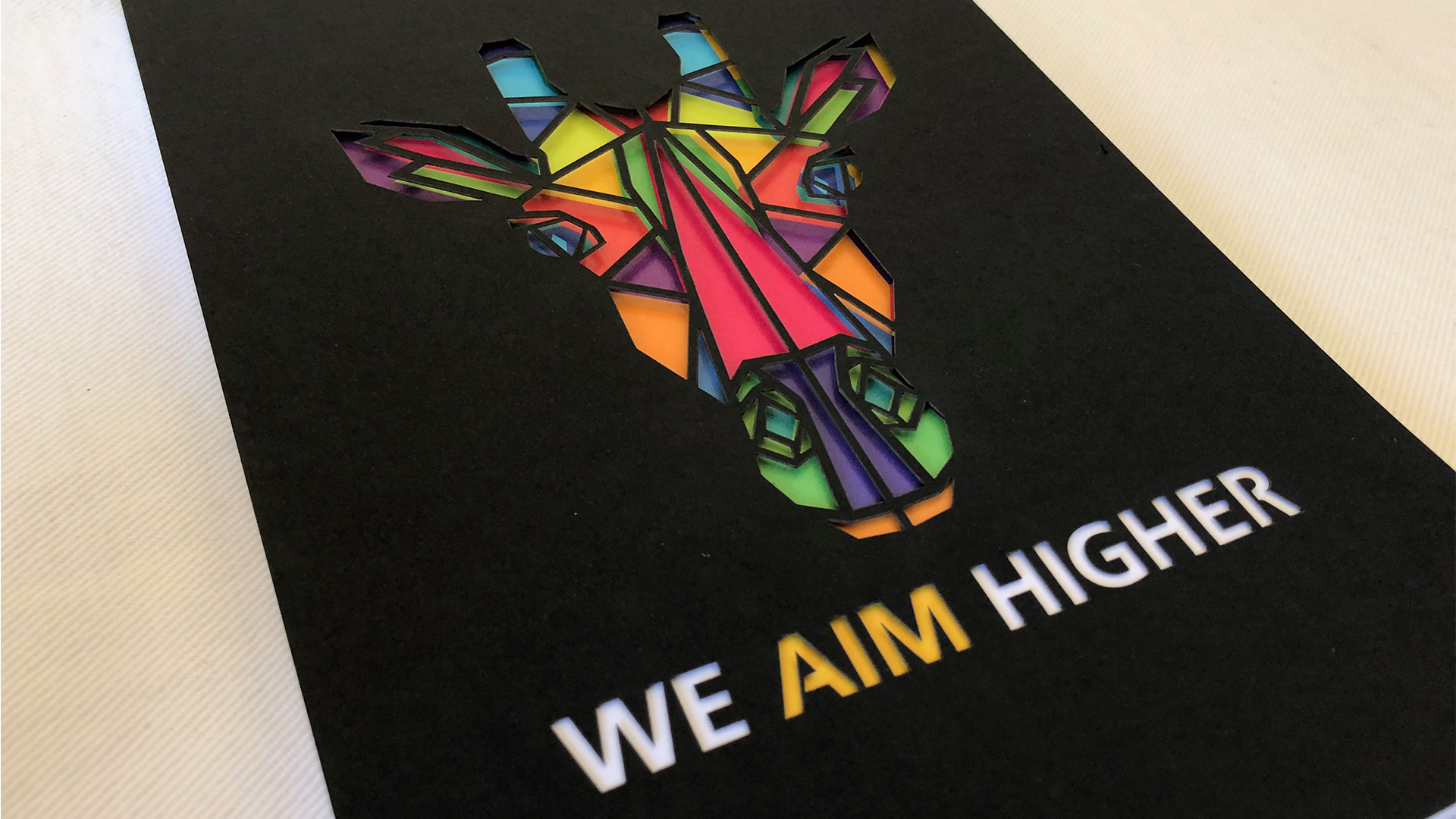